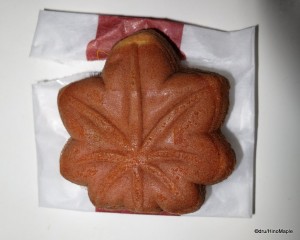 Momiji Manju is the most iconic omiyage of Hiroshima.  Simply put, it is a baked cake that is in the shape of a maple leaf with various fillings inside.  The typical filling is a sweet red bean filling (anko) that comes in many varieties as well.  You can get the regular paste, one with the beans only lightly crushed, and even white beans instead of red.  Today there are 8 main styles: Koshian (smooth anko), Tsubuan (lightly crushed anko), Shiroan (white sweet beans), Kurian (chestnuts with anko), Matcha (green tea), Cheese, Chocolate, and Cream.  There are several others that are available only when they are in season.  Recently they have even added cream cheese fillings rather than the traditional anko et al fillings.  Trying all varieties of Momiji Manju can be difficult as it is very filling but something you should try when visiting Hiroshima.  The combination of fried bread and filling is delicious but it can feel a bit oily and some fillings don’t go well with the cake.  You really never know if it will be good or not till you actually try it, and thankfully most of the shops will hand out samples.  The best place to get samples is to go to Miyajima but Hiroshima Station is also a good place to get samples. 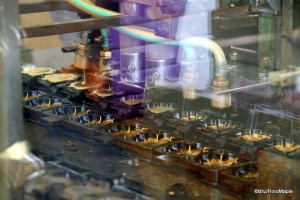 I can’t honestly leave this post with just talk about food.  Momiji Manju has a very long history.  It is such an old tradition that there are only stories into how the idea got started.  From what I can tell, Momiji Manju got started by Takatsu Tsunesuke who worked on Miyajima.  From the poor translation of the Wikipedia page, it appears that Takatsu created the treat for Ito Hirobumi and a delegation following Helen Keller.  Either that or it was inspired by a visit from them.  The actual shape of the Momiji Manju was trademarked in 1910 but originally created in 1906.  The trademark for the shape and design of today’s standard Momiji Manju was not renewed and the tradition of making Momiji Manju in its current shape took off.  Watching the chefs making Momiji Manju, or any manju for that matter is very cool.  You can see the traditional way of making it in Asakusa as you walk down Nakamise Shopping Arcade.  In Hiroshima, they converted to automatic machines in the 1960s and you can see them making the Momiji Manju this way in Miyajima.  Momiji Manju itself never became popular until the 1980s when a comedy duo (B&B) popularized this treat with their own comedy sketches by screaming “MOMIJIMANJU~~~!!!”  Today Momiji Manju is one of the most recognized and loved manju cakes in Japan.  You may not be able to get it easily outside of Hiroshima but it is very instantly recognizable. 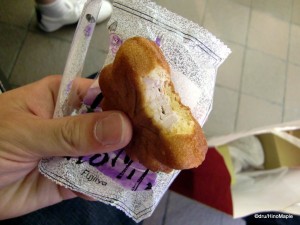 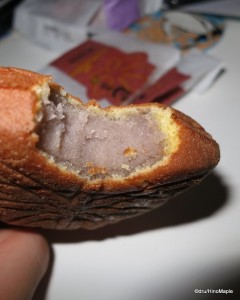