October is a busy motorsports month for Japan.  It often starts off with the F1 Grand Prix in Suzuka and ends with the MotoGP Grand Prix in Motegi.  For the last several years, I had gone up to Motegi to enjoy the motorcycle races and this year was no exception.  This year marked the second year that I would take the Twin Ring Motegi Circuit overnight tour from Tokyo Station.  I believe it is actually run by MobilityLand, the company that runs Twin Ring Motegi.  Last year was the first time I took this tour and this year’s tour was an exact copy of last year.  The tour was a near carbon copy of the year before.  They simply pick you up, let you have fun at the course, take you to your hotel, return to the course, and then take you home.  Of course the outcome of the race as well as what was available during the race was a little different but in general things are usually not very different at the MotoGP race each year.  The main thing that did change was the size of the event and the amount of activities at the event.  It was definitely bigger as Motegi is celebrating their 15th anniversary as a circuit this year.  I’m not sure what next year will bring but I hope they continue to keep the activities as great as they were this year as it was one of the best grand prix I had ever attended at Motegi. 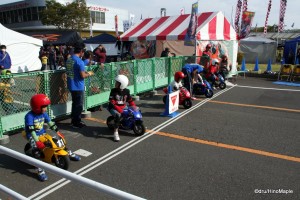 My trip to Motegi always starts off at Tokyo Station.  I used to depart from Shinjuku but now that I live on the east side, Tokyo Station is much more convenient.  This year marked the return of the Japan Grand Prix to its October time slot, even though the last two years were held in October.  In 2010, the race was scheduled to take place in April but that was delayed to October due to the volcanic eruptions in Iceland that year.  In 2011, due to the Great East Japan Earthquake, the race was once again delayed from April to October to allow for the infrastructure in Tochigi and Mito to be fixed up.  In all honesty, it was probably due to the nuclear problems than the actual infrastructure problems.  The build-up to the 2011 race was full of nuclear worries but all of the teams and racers did show up.  This year the race was scheduled from the beginning to take place in October and the event went off without a hitch.  The weekend started off as always but the area of event activities has expanded.  The main entrance of Motegi had been expanded to include a new interactive area called “Grand Prix Oasis” where kids could try pocket bikes and where they had a slowest rider competition.  Rather than having everything located within the main gates, it was refreshing to see the Grand Prix Oasis located outside of the main gates and that it focused on children more than adults.  Motegi is a large circuit and they do have a lot of activities you can enjoy outside of the circuit itself and it was great to see them trying to expand things by adding more activities for all age groups. 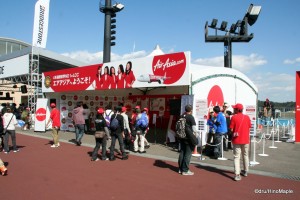 Inside the main track things were also expanded.  While the number of manufacturers with a display was the same as last year, the number of activities that were available was up.  The same four manufactures, Honda, Yamaha, Ducati, and BMW had their own stages. Bridgestone, a major Japanese tire manufacturer and the only tire supplier of MotoGP also had their own stage as always.  Then we have the apparel shops.  Valentino Rossi is by far the most popular motorcycle rider in Japan and you can find a huge variety of his merchandise at the track.  There were several booths set up for his apparel alone.  The good point about this year was the expanded space for other riders.  I often feel sad when I see great riders with great personalities get the short end of the stick at the grand prix.  They often have little to no apparel to be seen but this year they visibly had more items for riders other than Valentino Rossi.  It wasn’t a lot but it was more than they had before.  This is probably due to the inability of Valentino Rossi to be a leading rider for the past two years but it may also signal a change in the circuit, and MotoGP in general, to highlight the other riders who can help expand the entire series.  Putting all of your money into one rider is dangerous as when that rider retires, you could lose a lot of your fan base as people will no longer be interested in the series.  Hopefully people won’t lose interest when Valentino Rossi eventually retires. 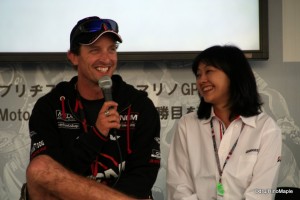 Each year all of the Japanese manufacturers and Bridgestone have interviews with as many of the top riders as they can.  This year I had the chance to watch several interviews.  Usually I just skip them because there is so much to do and I just don’t want to be stuck in the crowds.  When choosing an interview to watch, I highly recommend going to the Bridgestone stage as they usually have most of the riders attend a small interview session throughout the day on Saturday.  It can be difficult to see as it is popular and crowded but it can be worth it to any fan to be close to their heroes.  This year I made sure I watched Colin Edwards, Nicky Hayden, and Valentino Rossi give interviews at the Bridgestone stage.  They were very careful in how they answered their questions but Colin Edwards was as candor as ever.  This year saw the introduction of CRT motorcycles in the MotoGP class.  CRT is basically a sub-class that will never be able to challenge the factory motorcycles.  Think of it as an amateur versus a professional.  The amateur can run in the same marathon as a professional but the chances of them ever winning or coming in the top 10 is very low.  That is what the CRT is to the factory bikes in MotoGP at the moment.  Colin Edwards knows this and he is very vocal about how he doesn’t like it.  He doesn’t have much of a choice as he is at the twilight of his career, which is also one of the reasons he is able to speak as frankly as he does. 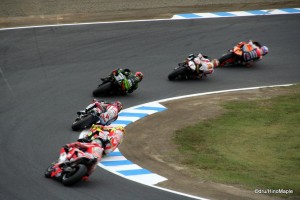 The races themselves were very eventful.  Motegi is one of the more challenging tracks for the riders and there have been spectacular races in the past.  Three years ago there was a fantastic battle between Valentino Rossi and Jorge Lorenzo.  Everyone was screaming as each pass was made.  This year, the lower classes again proved to be where all the action happened.  The new Moto3 class was spectacular with several crashes and several riders going off course.  Moto2 was another thrill that ended spectacularly.  The end of the race saw a couple crashes from the leading group that was very surprising.  The MotoGP class was not a complete bore.  It has become less and less interesting over the years as the battles between the riders have gone away.  In the past you could count on at least 3 or 4 pairs of riders battling it out during the entire race.  Today, that is down to just a couple riders battling if at all.  Thankfully the start of the race was smooth and all the riders nearly got away.  There were a couple small incidents but nothing scary, thankfully.  There was only one good battle between Alvaro Bautista and Cal Crutchlow.  They are riding on satellite machines and had a back and forth battle between each other until the final lap when Cal Crutchlow ran out of gas.  It was a great battle to watch, even when I got home and watched the race on TV.  Hopefully things will continue to get closer next year but to be honest, I don’t think so. 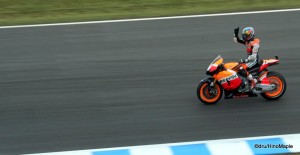 This year, I was happy to see that the Japan Grand Prix has grown since last year and I look forward to going again next year as always.  The Saturday qualifying day was one of the best qualifying days I have ever attended.  I was able to see more of the track than I had in the past, although there is still a lot for me to see.  It was also my final year taking the Twin Ring Motegi Tour as next year I am planning on re-joining the Yamaha Tour.  The Yamaha Tour is quite different from the Twin Ring Motegi Tour, but that is something I will save for a future post.  For now, I am just happy to report that the race met and exceeded my expectations this year and I can only hope that they continue to do the same, if not more, next year.  The bar has been raised a bit so it may be difficult for them to improve on it.  One of the best ways they can improve it is not something that they can do but something my own friends can do.  If my own friends come to join us, it would be a lot of fun and I’ll enjoy it a lot more.

2012 Air Asia Grand Prix of Japan is part of a series of posts recounting my trips to Twin Ring Motegi and the Japanese round of the Moto GP series.  To read my other posts about this race please follow the links below:

Videos of the 2012 Air Asia Grand Prix of Japan