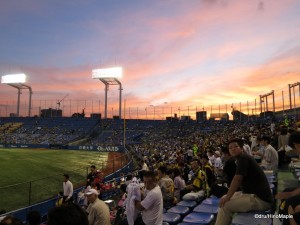 Crowds at the start of the game.

On September 26, I had another opportunity to go to a baseball game in Japan.  It was my third time in 2012 to watch a game and it was the second time in 2012 that I got to watch a game between the Hanshin Tigers and the Yakult Swallows.  Like my previous post, Japanese Baseball (Hanshin Tigers VS Yakult Swallows) (2012), I had a great time.  There really isn’t much to report in terms of what happens at a Japanese baseball game as you can easily read my previous post on that.  While the experience itself was the same, there were some differences and some new things that I learned about going to the game itself.  It was the first time I had to go and buy tickets for myself and I had learned about a Hanshin Tigers fan shop that is close to Meiji Jingu Stadium.  Needless to say, I am becoming a bigger and bigger fan of the Hanshin Tigers. 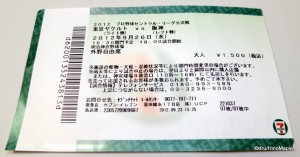 Buying tickets to any event in Japan requires you to either go to an official retailer, or go to a convenience store.  All major convenience stores have their own ticket terminals where you can purchase tickets to your favourite events.  You start off simply by going to the local convenience store and finding the terminals.  In Lawson’s they call it Loppi, but every convenience store has one.  It is often located next to the photo copier but that is not always the case.  The terminals themselves are not easy to use.  They are only available in Japanese and even for me it is difficult to use the first time.  Thankfully the Saviour was there to help me.  When going to a Yakult Swallows game, it is important to go to 7-11 to buy tickets as they do not charge a handling fee.  The other convenience stores do, so it is best to find a 7-11 if it is convenient for you.  The handling fee isn’t expensive but a 100 yen here and there does add up over time.  The process to purchase the tickets is pretty simple.  You follow the instructions on the screen and go through the menus till you can find the event and seat you want to get.  Once you do that, you follow the instructions till you get a print out of your order.  You must then bring this, which takes the form of a piece of paper or a receipt, to the cashier where they process the order.  All of the convenience stores have their own ticket printers which will give you your ticket.  If you are looking for a souvenir ticket, you are out of luck when going to a convenience store, but souvenir tickets with team logos and so forth are usually rare these days. 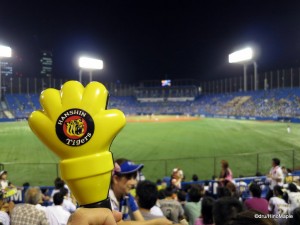 The other thing that I learned when going to this game is that there is a Hanshin Tigers store located near Meiji Jingu.  Every time I have gone to Meiji Jingu Stadium, I take the back route from the JR Chuo-Sobu Line.  That side of Meiji Jingu brings you to the outfield rather than home plate.  The closest station to the stadium is Jingumae Station on the Ginza Line which takes you straight to the stadium right behind home plate.  It is also where you can get same day tickets to the game.  It is probably one of the best ways to get to the stadium as the road is lined with various shops selling food and beverages.  The prices are typical of any festival in Japan but not as cheap as you could find in a convenience store.  Thankfully they have those on the way to the stadium too.  The main highlight for me was the Hanshin Tigers shop.  It is a small shop that specializes in Hanshin Tigers memorabilia.  It is a busy place on any game day so bring your patience cap if you choose to go.  It is also small and extremely tight inside the shop.  The variety of items available in the shop is a bit small to be honest but they do have a few items you can’t find elsewhere.  If you are looking for the typical items such as towels and sticks to make noise, you can easily skip the shop but if you are looking for specific jerseys or a unique jersey, you must go to the Tigers shop to get it.  Finding a Kanemoto jersey is not hard at the stadium but finding a pink jersey, popular with women, is hard to find around the stadium itself.  Do be aware that there are lines at the shop both before and after the games. 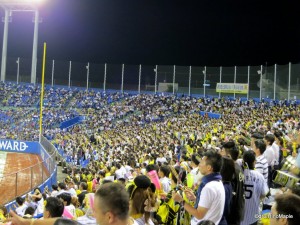 Fans at the end of the game.

In terms of the game, it was a terrible loss for the Hanshin Tigers.  The first inning saw the Yakult Swallows go up 5-0.  It was a painful inning to watch and I almost cried.  The crowd was unrelenting though as they continued to cheer as hard as ever for the Tigers.  The crowd at Meiji Jingu was not large and there were a lot of open spaces at the start of the game but as the game continued the area became full.  The outfield section was nearly full by the time the game did end.  Unfortunately the 5 run lead that the Swallows obtained in the first inning proved insurmountable.  The Tigers did try to respond with 2 runs in the 6th but the Swallows countered with 1 of their own.  The 7th saw the Tigers fans have something to cheer for.  Komiyama, the centre fielder, hit a solo home run which sent the crowd screaming for joy.  The Swallows then countered again with 2 runs in the same inning and another 2 in the 8th.  The Tigers were down 10-3 at the start of the 9th and only a last ditch effort by the team to get 7 runs in the last inning would tie the game.  It wasn’t impossible as the last game I attended they did go on to score many runs in the last inning.  The inning started regularly but it suddenly got loud and exciting when Kanemoto came to the plate.  Kanemoto is one of the most accomplished hitters in Japan with the most number of home runs for a left handed hitter.  He announced his retirement this year and played his last game recently.  During this game, he came to the plate and everyone was willing him to get a homerun.  Kanemoto is a left handed hitter so everyone was waving their bats to the left urging him to hit a homerun into the home team outfield stands.  It was an amazing sight, a lot of fun to join in, and you can watch a video of it below. 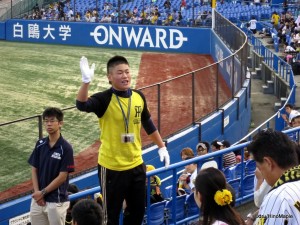 Instructions on the cheers.

The gods must have been smiling on Kanemoto as well as the Tigers fans as Kanemoto was able to get a homerun on one of his last games.  The crowd went crazy and even though the Tigers lost the game, everyone was very happy.  Everyone was excited and enjoyed screaming and cheering for Kanemoto, their hero.  It is difficult to explain the energy you get when watching baseball in Japan but it is a lot of fun.  I have taken a few people out to the games and all of them loved it, even if they weren’t baseball fans.  Many of the people I have taken to games never even watched baseball in their life but one you start getting into it and the cheers, it is a lot of fun.  If you ever get the chance, even if you don’t normally watch baseball, go and enjoy yourself.  Bring a friend or two, buy some beers, and just go crazy cheering for whichever team you happen to be with.  You won’t regret it.

Japanese Baseball (Yakult Swallows VS Hanshin Tigers) (Take II) (2012) is part of a series of posts on baseball in Japan and my experiences going to various games.  To read more about other games I have experienced, continue with the posts below: