At an unknown dam along route 55. (Shikoku)

In 2007 I became a motorcycle owner in Japan.  I bought a Yamaha XJR 400 for the purpose of touring all over Japan.  I used it for a couple trips around Tokyo and only a couple trips outside of Tokyo.  It was such a pain to get out of Tokyo that it wasn’t really fun to go riding.  Add to the fact that there was no one to really share in my passion while I was in Tokyo and I was not the happiest rider in Japan.  I loved riding in Vancouver as I had many friends whom I could call up at a moment’s notice and go riding with them.  Now I am in a foreign country and I haven’t met enough people with bikes who would like to go riding.  Even now it is a difficult task but it I doubt it would be as hard the way Facebook has taken off and how my own personal networking skills have expanded.  In 2009, I decided to sell my motorcycle because I was at the end of my mechanical inspection and it would have cost me a lot more to keep my bike.  I did a few calculations and if I maintained going on a single motorcycle road trip once a year for 2 weeks, the cost of renting a motorcycle would be the same as owning one.  The math decided things for me and I decided to sell my bike. 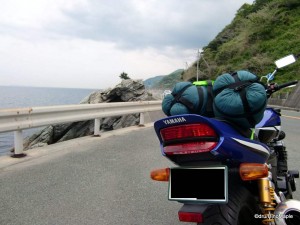 Selling a motorcycle in Japan is a fairly easy task to do.  At first I thought it would be very hard as I would probably have to head to a dealership or find some other method of selling it.  I instinctively thought about going to the dealership where I bought the bike to see if they would buy it back.  I also considered selling it to another guy and I told him how much I was willing to accept.  I was willing to accept a significant decrease in price but at the same time I had no experience selling a bike so I still had to figure out how to do the transfer of ownership and so forth.  Instead the Saviour saved my butt, for the umpteenth time, and did a little Googling.  We found a few websites to give us some information on what to do and ended up calling a few bike purchasing companies.  We set up the appointment with all of them and to our surprise they all asked if someone else would be going.  We set up the appointment for a time when we could all be there and I proceeded to clean up my bike a little so that it would look clean.  On the appointed day that they arrived, I brought my bike to our location and then the inspection started. 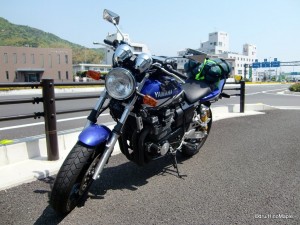 Upon their arrival, they introduced themselves to me and they did a quick visual inspection.  They then proceeded to explain what they would do and they all seemed to know each other to some degree.  They went over my bike with a fine toothed comb and noted various scratches and marks on the bike.  They took photos with their phone and uploaded it to their company servers.  Of course they did an engine start and let the engine warm up while testing the bike.  They never rode the bike but they did inspect the sound, the exhaust gases and other things like signals and lights.  From there, they called their company to get a final estimate for me.  It took a few minutes for the companies to return with a reply and they proceeded to write the prices on either a piece of paper or their business cards.  They handed the prices to me secretly and allowed me to make a decision.  I was pleasantly surprised by the offers as I wouldn’t lose as much as I had suspected.  I actually lost almost nothing on depreciation and I was really happy with it.  The only sour point was the fact that one of Japan’s largest used bike retailers, Bike O (バイク王), had low balled me by about 100,000 yen!  I feel that the system where various companies will come to your house and take a look at your bike and then bid on it is one of the most convenient ways to sell a bike.  For a foreigner like me it made the process of selling my bike very easy and painless and I couldn’t have been happier. 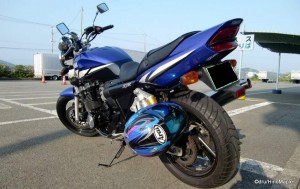 After the sale was agreed, the guys who didn’t win with the highest bid took off and I was left to complete the transaction.  The guy who did win did ask for a little discount and since I was really happy as is, I said okay and let him get a small discount of less than 10,000 yen.  I can’t remember exactly but it was a small amount.  I then proceeded to sign all the paperwork and so forth and the guy was then left with my bike and key.  It took a bit more time for him to load his truck but that was the last time that I saw my beloved XJR.  It has now been about 3 years since I have had a motorcycle and I do miss it.  It is a passion of mine that I wish to do again in the future but with a dog, travelling by train, and other activities, I just don’t have money to keep doing it.  Tokyo isn’t an ideal place to have a motorcycle as it takes nearly a full day to get out of town.  If I ever lived somewhere else in Japan, I think I might be getting into motorcycling again.