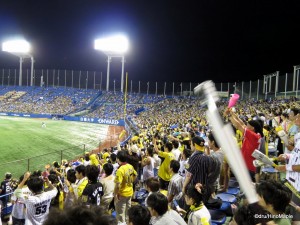 Tigers Fans in the Outfield

Last week I talked about going to a baseball game in Hiroshima.  I had watched the game between the Hiroshima Carp and the Yakult Swallows.  Upon my return to Tokyo, I realized that I hadn’t been to a Hanshin Tigers game in about a year.  The last time I went to a Tigers game was almost exactly 1 year ago.  I picked up tickets the day before the game and headed out to what may be becoming an annual event for me.  If you have never been to a Hanshin Tigers game, it is one of the craziest games you can imagine.  Hanshin Tigers fans are some of the most crazed fans in all of Japan and the team is often likened to the Red Sox while the Yomiuri Giants, Tokyo’s top team, are likened to the New York Yankees.  If you want to read more about the Tigers and the Swallows in general, you can read about it in my past posts from the times I went to games in 2008 and 2011. 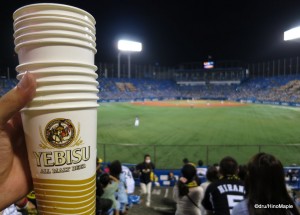 Being somewhat used to going to baseball games, I arrived about an hour before the game and headed towards centre field.  I found some seats near the press gallery and set up shop.  With an hour to go before the game and the sun still relatively high, I regretted that I forgot to bring sunscreen, but with only a little time before the sun went behind the surrounding buildings, it wasn’t a big problem.  I was also better prepared for this game than previous games.  I made sure I stopped off at my local supermarket to get enough food to last the game.  I started into the beers right away and my final count for beers was about 6 by the end of the ninth.  Just a little much, but when you are having so much fun in the game it is hard to stop.  The pregame antics didn’t get under way until about 30 minutes before the game started.  The cheer leaders came in around 40 minutes before the game started and handed out little cards to help us sing along to the songs for each of the players.  Note that they are not cheerleaders as these guys are not there to entertain us but to help us to know which cheer to sing at which times.  At 30 minutes before the game, the cheer leaders led everyone in the Tigers Song before going through the starting lineup player’s songs. 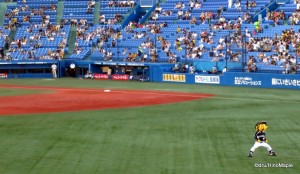 Once the game got started, everyone was cheering along and by the second inning, the Tigers were up 1-0.  It was the only exciting thing to happen in the first half of the game and a good way to open as well.  There is nothing like the team you are cheering for to get a quick run in the beginning of the game.  The rest of the game was pretty boring until the seventh inning.  As usual, the Hanshin Tigers fans erupted into the Hanshin Tigers Song to cheer on their team.  After the top of the seventh ended, the Yakult Swallows started to sing their song which meant the Tigers fans took over as well and sang their version of that song in which they deride all of the other teams in the league as well.  After the seventh inning, the Yakult Swallows tied the game at 1 each.  From there, the Tigers played their hearts out in the ninth inning.  It was a very long inning for the Swallows as the Tigers were able to score 6 runs.  It was one of the most exciting games I had been to for the ninth inning alone.  During the game, the Tigers fans went into cheers of excitement after every run followed by a singing of the Tigers song.  Try doing this 6 times in a row and you get the idea of how much fun it can be.  Suffice to say, the Tigers won the game and being with the other fans, the crowd was elated.  Perhaps it was my luck as they also won last year when I went. 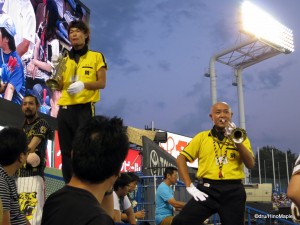 Cheer Leaders of my Section

Now that the game summary is out of the way, the main purpose of this post is to highlight the songs of the Hanshin Tigers.  The songs they have are very hard to sing to if you are not familiar with them, or Japanese for that matter.  They often have special songs for the main players of the team, generic songs for other players, and of course their own theme song.  I wish I knew the songs before going to the games in the first place and even now it is difficult to catch them all but here is a quick primer into some of the most important songs.

The Hanshin Tigers Song is the most important song that you can learn.  It is the rally cry to get people into the game and it is sung after the top of the seventh for home games and before the seventh inning for away games.  With everyone belting it out, it sounds much different than the official sound of the song.

Lyrics from Wikipedia (Unfortunately I can’t translate it)

Basically, you can hear the official rendition of the song on YouTube:

You can also watch the version I put on YouTube myself.  Note, during games they usually just sing the first verse.

Each player has their own song and trying to learn each of them on your own is pretty tough.  For example, Takashi Toritani’s song is:

Often these songs are very similar in tone and you can easily follow along and end with the crowd.  If you look at the 「」marks, you can see the end which actually says “Toritani”.  You just have to clap along with the crowd and then cheer his name at the end.  It is pretty easy to join in at that part, even for beginners.  For a slightly more advanced cheer, you can add the first part as well and sing “Katobase Toritani” at the end of the cheer.  The part in 「」 is the most important part as even Japanese fans don’t know all of the songs for each player.  Learning their names may be the toughest part of the basic cheer but if after several innings and hearing everyone cheer, it becomes easier.  You can hear an example of it on YouTube which is also a great way to practice as this video plays the song slower than usual:

You can also see it performed live at the game I went to as I also uploaded a YouTube video:

Basically, if you want to learn all of the cheers, you can visit 2012年度 阪神タイガース応援歌 for all of the songs for the main players.  All of the songs are all played a little slow so it isn’t the same as going to a live game when the tempo is increased.  It is a good way to learn the songs if you ever want to become a real fan of the Hanshin Tigers.  For myself, I’ll be happy to learn just the end and clap along with the other fans.  In fact, I bought my own first pair of plastic megaphone clappers so I guess I have to go to more and more games of the Hanshin Tigers. 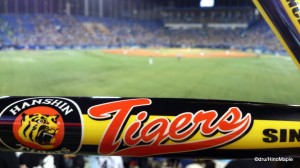 When visiting a baseball game in Japan, it isn’t important to know how the game is played, but it is important to keep up with the crowd.  Screaming with the crowd and cheering for the team is one of the best ways to have fun.  The beer helps too but it isn’t necessary.  Most of the Tigers fans are not heavy drinkers, but they may look like it.  They love their team and will cheer enthusiastically until they finally win that championship.  Unfortunately they may never win the championship as they still seem to be cursed.  Perhaps in a couple years they will make it to the top and win in the playoffs but being near the bottom of their league and unlikely to move into the playoffs, I highly doubt it.  There is always next year and I’ll definitely go to a game again.  It is a great thing to do in the summer, even if it was a bit expensive.  There really is no price for having fun.

Japanese Baseball (Yakult Swallows VS Hanshin Tigers) (2012) is part of a series of posts on baseball in Japan and my experiences going to various games.  To read more about other games I have experienced, continue with the posts below: