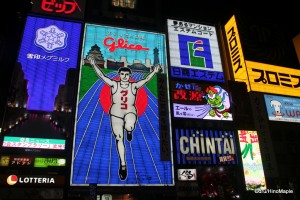 Osaka is the second largest metropolitan area in Japan. While it is the third largest city after Tokyo and Yokohama, both of those cities can easily be considered the same city as many people commute from Yokohama into Tokyo for work every day and vice versa.  Osaka itself is a central hub for business with several major Japanese companies being based in the region.  The most notable companies would have to be Panasonic and Sharp, but they are not the only major companies operating in Osaka.  In general, Osaka can be broken up into two regions, Kita and Minami.  It is a fairly simple concept to understand as Kita is translated, literally, into “north” and Minami is “south”.  Then there is the need to understand the culture which revolves around friendly people and delicious food. 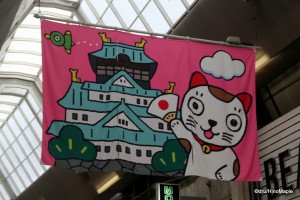 Kita is an area of Osaka that is centred on Osaka and Umeda Stations.  They are essentially the same station but operated by different companies.  It can be a little confusing at first but it is easier to understand that in Osaka, most companies don’t share station names.  Generally speaking, if there is a different entrance to the fare paid zone it is a different station, even if they are essentially connected.  Unfortunately, I am not very familiar with the Kita area of Osaka as I have mostly been through the area going from Shin-Osaka Station to the Minami area of Osaka.  From what I have been told, it is a more upscale area with a lot of interesting characters.  I would say that almost everyone visiting Osaka will also see the Kita area as the Kita area does include Shin-Osaka Station, a major station on the Shinkansen line, as well as Itami Airport.  It is the most popular way to enter Osaka, but it is not the only way.  As I mentioned, it is unfortunate that I have never spent enough time exploring the area, but someday I hope to go and explore the region a lot more in the future. 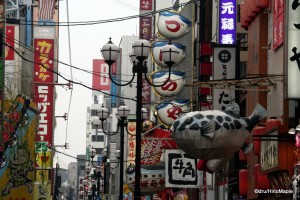 Minami is the more interesting area of Osaka.  It is where most of the action is.  The central station of Minami has to be Namba Station, which is also one of the most confusing stations in Osaka.  Rather than having one station called Namba, there are actually 3 stations interconnected with the central one being called Namba, a secondary Namba called the Nankai Namba Station and a third station called Osaka Namba as well.  It would be much easier to just call of them Namba Station, but that is a little too easy and logical for the city.  While Namba may be the central station in Minami, it is not the central area.  Dotonbori is an area that is between Namba Station and Shinsaibashi Station.  It is where most of the action in Minami is.  It is home to the famous picture of Glico man as well as the craziest shopping area in all of Osaka.  It is literally a mad house.  Shinsaibashi is also a famous area that is more upscale along the lines of Ginza with various high end fashion brands located on the main street.  Immediately next to that is America Mura which is more of a hip hop and skater fashion area.  Lastly, but not least is the Tennoji area which is home to Shinsekai.  Shinsekai is a famous old area that has an old TV tower.  There are too many things to talk about in Minami and I will cover it in greater detail in the near future. 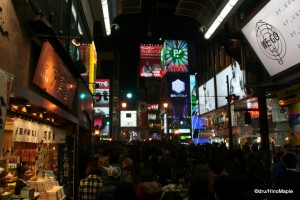 The other thing to understand in Osaka is the culture.  It is a different culture compared to Tokyo.  It is more laid back and very friendly.  Osakan people are considered one of the friendliest people in Japan.  You won’t have much trouble making new friends in Japan when in Osaka as you can easily strike a conversation with someone.  It can also be a bit troublesome for people living in Japan as Osakan people tend to speak as much English as possible when they do see you, making it a bit more difficult to learn Japanese.  The second important thing to learn is that people in Osaka and Kansai in general, are considered the funniest people in Japan.  More comedians are from Kansai than any other region in Japan and the largest comedian agency is located in Osaka with their largest theatre there as well.  Lastly is the food.  Osaka is a gastronomic explosion of flavours.  There are foods that you can find in Osaka that you will not find better in any other region of Japan.  A lot of it is deep fried but a lot of it is healthy.  You can easily enjoy yourself and eat at almost every hour during the day.  I am not lying when I say that I was never hungry when I visited Osaka, and you shouldn’t either if you are brave enough to try entering strange looking restaurants. 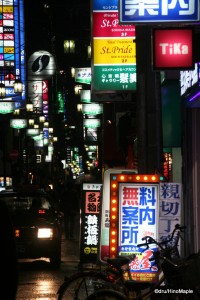 Osaka is a great city that is a place people must visit.  While many people will say that you have to skip it, if you love the city atmosphere and you love to eat, Osaka is a place to visit.  While you will not find the best sushi in Japan there nor will you find the best traditional Japanese food in Osaka, you will find the greasiest soul food Japan has to offer.  For a major city in Japan, you will find the friendliest people ever.  In Tokyo, people are in a rush and tend to be a bit grumpy in general.  In Kyoto, people tend to be a bit snobby, but Osakans tend to be approachable and capable of taking a good joke.  Unfortunately, their openness hurts their reputation as many people look down a bit on Osaka in general.  Don’t let anyone tell you that Osaka is not a good place to visit.  If you want to have a lot of fun, enjoy good food, and see a crazy city, Osaka is for you.  If you want to see a more traditional side of Japan, it is better to stick with Kyoto, but that also means Osaka wasn’t meant for you in the first place.

Osaka – An Overview is part of a series of posts on Osaka.  To read more, please head on over to: