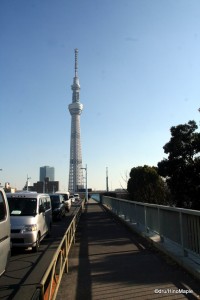 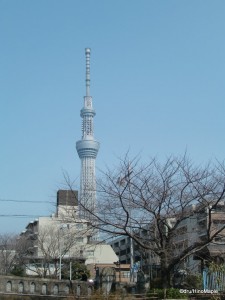 Kinshicho is my home station in Tokyo.  I live close enough and I know all of the good places to see Tokyo Sky Tree around the station.  One of the more popular places to see Tokyo Sky Tree is from Kinshi Park.  It is a medium sized park that has just gone through a major re-landscaping project.  The entire park had been rebuilt and everything had been shifted around.  It is a very nice park now with lots of space to relax on a nice spring day.  For those who really want to visit Tokyo Sky Tree, it is just a quick 1.5km walk north of the park.  This isn’t the best way to reach Tokyo Sky Tree from Kinshicho Station.  Kinshicho Station is dominated by the JR station and inside the station there is a lot of information on how to get to Tokyo Sky Tree.  The most recommended route to Tokyo Sky Tree is to head west followed by heading north through Oyokogawa Park.  It is a little difficult to find the park, but there are maps, in Japanese, within Kinshicho Station to help you.  The route itself takes you in front of the Tobu Levant Hotel which is a popular place for taking photos of Tokyo Sky Tree.  Once you get to Oyokogawa Park, you will be in one of the best kept secrets of Kinshicho that is until Tokyo Sky Tree opens up.  The park itself goes from Kinshicho all the way to Tokyo Sky Tree.  On any given day, you will see lots of families within the park and people walking their dogs.  In fact, I often walk my dog in this very park.  There are several great places to take photos of Tokyo Sky Tree in this park. 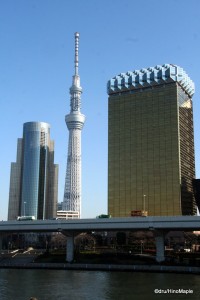 When most people think of Tokyo Sky Tree, they think of Asakusa.  This is probably where most people in Tokyo and most tourists will think of going to reach Tokyo Sky Tree.  It is the most efficient for any tourist as you can couple a visit to Tokyo Sky Tree with a visit to Sensoji and maybe even Kappabashi.  Asakusa has many great places to see Tokyo Sky Tree and probably the most popular is at Azumabashi, the famous red bridge crossing the Sumida River from Asakusa to the Asahi buildings.  While this is a good spot for taking photos and seeing Tokyo Sky Tree, heading a little north into Sumida River Park is a lot better.  The park itself is not as busy with tourists as many people tend to skip it.  Aside from the entrance area near the Tokyo Water Bus terminal, most people don’t venture more than a few hundred metres from the bridge.  Heading north will take you to nice quiet areas of the park that has more locals than tourists.  Walking from Asakusa to Tokyo Sky Tree is a very easy way to reach Tokyo Sky Tree and probably more enjoyable than fighting all of the people at Tokyo Sky Tree Station, however, if you are lazy, you can start off at Tokyo Sky Tree Station and work your way back to Asakusa instead. 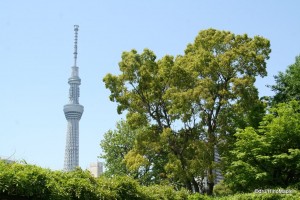 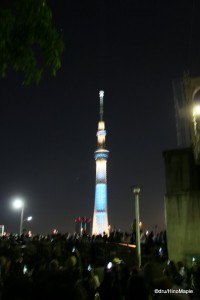 Timing is an important part of seeing Tokyo Sky Tree.  Up until recently, Tokyo Sky Tree has been pretty dark.  It is a monolith of steel in the night sky that is difficult to see.  Over the past couple months, in preparation for the opening of Tokyo Sky Tree, I have had the luxury to see them light Tokyo Sky Tree.  It all started with the tower being partially lit.  There are three primary colours, purple, blue, and white.  The entire tower can be lit by a single colour or a combination of the colours.  There are three main areas for lighting, the inner column, the outer structure, and the “crowns” that are around the observation decks and antenna.  There are also small spots along the entire structure that look similar to stars on the side of the tower.  These lights are designed to twinkle and give the appearance of “gold foil”.  In my previous post about Tokyo Sky Tree, one of the pictures shows the crowns lit up along with the small spots of twinkling light.  The last aspect of Tokyo Sky Tree at night is the rotating lights at the top of each observation deck.  The tops of the observation decks have a strip of white lights.  These lights “spin” creating the symbolism that time is passing.  They look a lot better in person but unfortunately they are difficult to capture with a photo.  I am sure that once Tokyo Sky Tree opens and the lights are turned on nearly every night, you will be seeing a lot more pictures at night.  I was originally skeptical of it looking really nice, but after seeing it fully lit up, I must say that it looks great.  I look forward to enjoying Tokyo Sky Tree in the foreseeable future, but I do worry that I will get used to it, just as I had gotten used to seeing it in person. 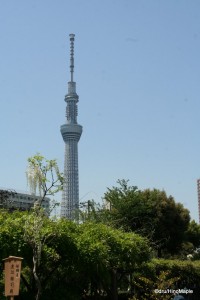 There are so many places to see Tokyo Sky Tree and the area around it is great.  It is a very different approach than what they did with Tokyo Tower.  I like Tokyo Tower as well but I found it to be lacking in things to do.  It is difficult to find a lot to do but it does make people feel more as if they are in Japan.  Tokyo Sky Tree is definitely a modern place.  The designers had Japanese tourists in mind when they built this area.  Tokyo Sky Tree calls to the modern styles of Tokyo such as Rainbow Bridge and the destination of Solamachi is a modern tourist attraction.  Shopping malls, aquariums, planetariums, and local foods call Japanese people from all over Japan to spend a day at Tokyo Sky Tree.  While I fear that the neighbourhoods will have a little trouble competing with a big box shopping mall but I think some of the shops will be okay.  Unfortunately, I think the small mom and pop shops will probably go out of business but the really good places will remain.  Do visit Tokyo Sky Tree when you are in Tokyo, but please be patient as you won’t be able to go up to the observation decks until after July 11 when they open tickets to the public.  Until then, only those who pre-bought tickets can head up to the observation decks.

Tokyo Sky Tree (Opening Day) is part of a series of posts about Tokyo Sky Tree.  To read more, please head over to