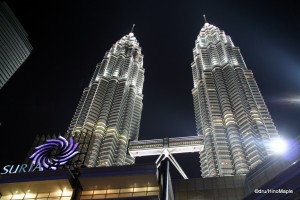 In March 2012, I headed out of Japan for a much needed vacation.  It had been 6 months since my last vacation outside of Japan and I was really feeling the need to get out and experience something new or at least something different.  I planned my trip to Kuala Lumpur (KL) at the end of 2011 after visiting Singapore.  I wanted to see another F1 race in 2012 and felt that Malaysia offered the best value for my money.  I opened my bank account, booked my flight, F1 tickets, and hotel.  Little did I know, my trip would be altered a lot by a last minute tag along; my brother.  What was supposed to be a trip for just me and my girlfriend ended up being a trip for 4 when my brother decided to tag along on my trip to KL while bringing his friend.  He had an extra 24 hours in KL as he would arrive a night before me and return to Tokyo the morning after me.  It ended up being a blessing as he was able to show me around KL as he had a short night to get acquainted with everything before we arrived.  In fact, he had such a head start that he was able to e-mail me about things before I even left Tokyo. 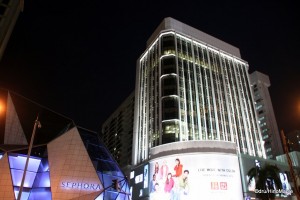 KL is a relatively small city to visit for tourists.  Depending on your type of travel, there are only a few things to see and do while in KL.  Most people who stay in the luxury hotels will be staying in the “Golden Triangle”.  It is an area that is bounded by the Petronas Towers, the shopping district of Bukit Bintang, and the 5-star hotel area.  I spent most of my time in that area with relatively nothing else to do.  There must be many other things you can do within KL but unfortunately there was not enough information available to me to understand or even know if there was really anything else to do.  While it may be my fault for not attempting to look up more information; for the limited amount of time that I was there, I don’t regret not seeing more.  My general impression of KL is that it is a beautiful city that needs just a little more to make it a place that I would love to visit more often. 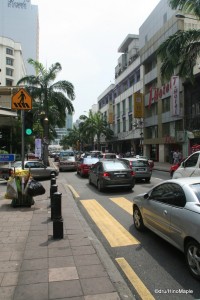 Bukit Bintang is what I would consider to be the heart of the shopping district in KL.  There are several malls within that area and many places to go and eat.  It is a busy area with many tourists on the streets at almost all times of the day.  It can be a little difficult to learn where to go at first but after a little walking around and getting lost a couple times, it isn’t a bad place.  My first experience in KL was to wander around the entire Bukit Bintang area.  I started off at the Pavillion Mall, then ate at Lot 10, and then proceeded to wander the streets to the south of Bukit Bintang Station.  It was a very interesting area but a little dirty at times.  A lot of the malls were great.  You can see a lot of different shops and eat a lot of great food.  I enjoyed visiting the different food courts and shops and eating the different types of food available to me.  While I didn’t venture out into some of the crazy areas, I did enjoy seeing things at least once.  The area south of the station and around the malls were full of different electronics shops and massage parlors.  Unfortunately, I was a little scared to go and get a massage, so I just stuck to myself which might not have been the best thing in the world but I was still happy with my experience in Bukit Bintang. 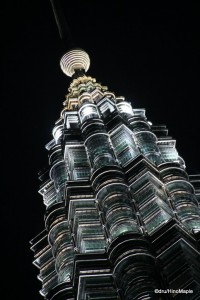 Kuala Lumpur City Centre (KLCC) is an area around the Petronas Towers.  It is a famous area for most tourists and a must for anyone visiting KL.  I never went up to the observation deck of the Petronas Towers but I heard that the view was not as good, especially when compared to KL Tower.  I only had a little time visiting KLCC as I had visited KLCC once on an evening after seeing the qualifying at Sepang during the day.  I had enough time to see Suria, the main shopping mall at the base of the Petronas Towers, hear a large concert that was happening there and take many photos of the towers themselves.  KLCC park is a nice area too that I visited at night.  There seemed to be a lot of things I could take a look at but unfortunately time was not a luxury around then so I just walked through the park wondering what it would look like in the day.  If I ever return to KL, I will definitely take more time to see this area during the day and try to check out some of the other things in the area. 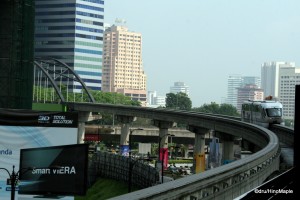 The only other area within the city that I visited was the Brickfields area.  While I did visit the area, I didn’t spend a lot of time there.  I mainly used it as a transfer between the monorail and the KLIA Transit.  The area is undergoing a lot of renovations with a new mall, Nu Sentrail Shopping Mall, being built.  It will take a bit of time for the mall to be completed as when I walked between KL Sentral’s monorail and KLIA Transit stations, the mall was nowhere near completion.  I have read that Little India is situated in the area as well as some of the seedier areas of KL.  My experience there was very short so I didn’t have much time to see anything in the Brickfields area.  I tried to venture out and about a little but the main station area is not special either.  I found the entire area to be lacking but it could easily be just my own perspective of transferring between the KL monorail and the other KL Sentral station. 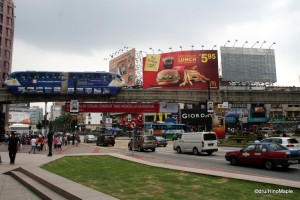 I feel as if I never truly visited KL.  I had been to several areas of KL but I never really experienced it.  I did a lot of mall hopping in Bukit Bintang and ate a lot.  Due to the need to visit Sepang for 2 days for the F1 race, I lost a lot of time to go out and see other parts of the city.  In total, I would say that 3-4 days in KL is more than enough for most tourists.  While I could be wrong because I never ventured too far from my own hotel, this is my own opinion at the moment.  When I travel, I love to travel to places where I know someone and that person can show me around a little.  I love the idea that I can see things that most people won’t be able to see.  It is hard to get around at times when you need at least 1 day to learn where everything is and by the time you do learn about things you end up leaving the city.  Unfortunately, I was happy to leave KL as I was missing Tokyo but if the opportunity arises and I get a very cheap deal to KL, I would be happy to return again.

Kuala Lumpur is part of a series of posts talking about Kuala Lumpur.  To read more, please continue reading: