This year I decided that my grand trip would be to head to Malaysia to watch the 2012 Formula 1 Petronas Malaysian Grand Prix.  After going to the Singapore Grand Prix in 2011, I talked about what our next trip would be with my girlfriend.  We decided that it would be cheaper overall and probably more enjoyable to head to Malaysia to watch the F1 Grand Prix than to go to the Japanese Grand Prix in Suzuka.  In Singapore, we had a great time and I enjoyed seeing and doing many things.  I had no expectations whatsoever in Malaysia and after doing some researching, I found a cheap flight and ordered tickets online to the F1 Grand Prix.  I wasn’t expecting too much from what I had seen but I did expect a typical F1 experience.  Unfortunately, whether it was due to the promoters or Malaysia itself, I was let down in many ways. 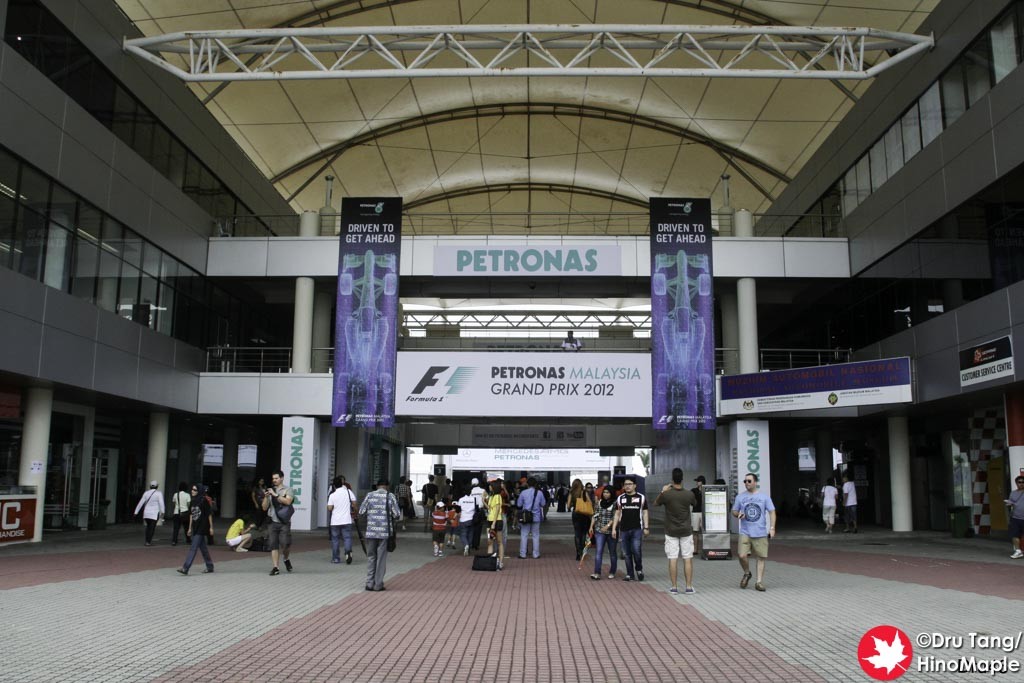 The atmosphere of the Malaysian Grand Prix was similar in many respects to the other Grand Prix I had visited.  The need for a party like atmosphere with many familiar overtones was dominant.  First, there were the typical shops where you could enjoy buying various F1 merchandise at F1 prices.  It is safe to say that almost every F1 race has the exact same shops when it comes to merchandise.  You will find shops that sell all of the various team clothing and accessories but you will be hard pressed to find a lot of it at the Malaysian Grand Prix.  I found that the Singapore GP was a little better overall in terms of what I could buy.  It could be because the F1 season is just starting when the Malaysian GP is being held so many of the teams don’t have enough merchandise on offer, but that is just speculation on my part. 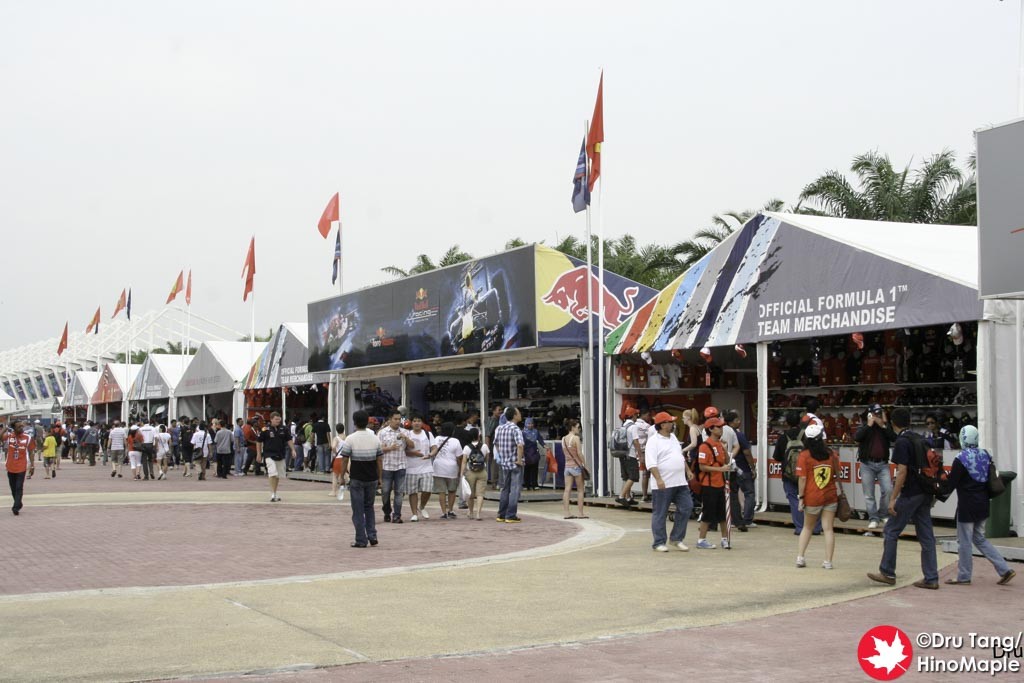 Shopping at the Malaysian Grand Prix

Then there is the food.  You can’t go to any F1 event without noticing the types of food that are on offer or trying it when you are there all day.  In Japan, there are a lot of standard foods that I eat at the race all the time and they are usually delicious.  At the Malaysian GP, I found the food to be sub-par for what I would like to eat.  While there are a lot of good things to eat, there was too much bad western food and the Malaysian food that was available was just average.  I didn’t mind it too the food in Malaysia too much but after eating at the Japan GP or even the Singapore GP, I was a bit disappointed with my experience here.  Maybe in the future the circuit organizers can improve their food offerings as other areas of Kuala Lumpur had very good things to eat. 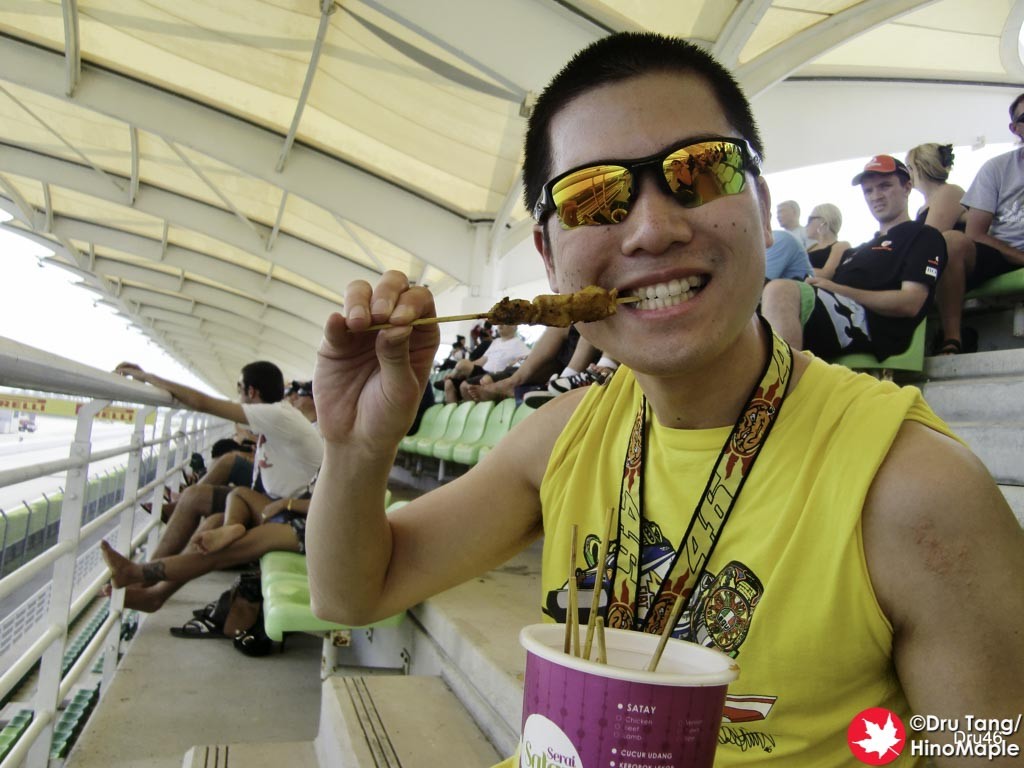 In terms of facilities, the Sepang International Circuit is a nice place.  The circuit is very interesting with a lot of good racing.  They have several sections and going to the GP is relatively cheap.  You don’t need to buy a ticket to just go to the races and enjoy the atmosphere.  The only time you need to show your ticket is when you head into the grandstands, but even then it doesn’t matter too much.  The layout is a little strange as they have a large parking lot that serves as the drop off and pick up point for the various buses.  You then walk up or take a shuttle up a hill that leads to the main entrance.  The main mall is basically a public area that has a welcome centre and shopping leading to the main grandstands.  It is a nice setup that allows people who haven’t paid for tickets to still experience a bit of the GP itself, but I was amazed that they didn’t have a few basic merchandise items that were exclusive to ticket holders. 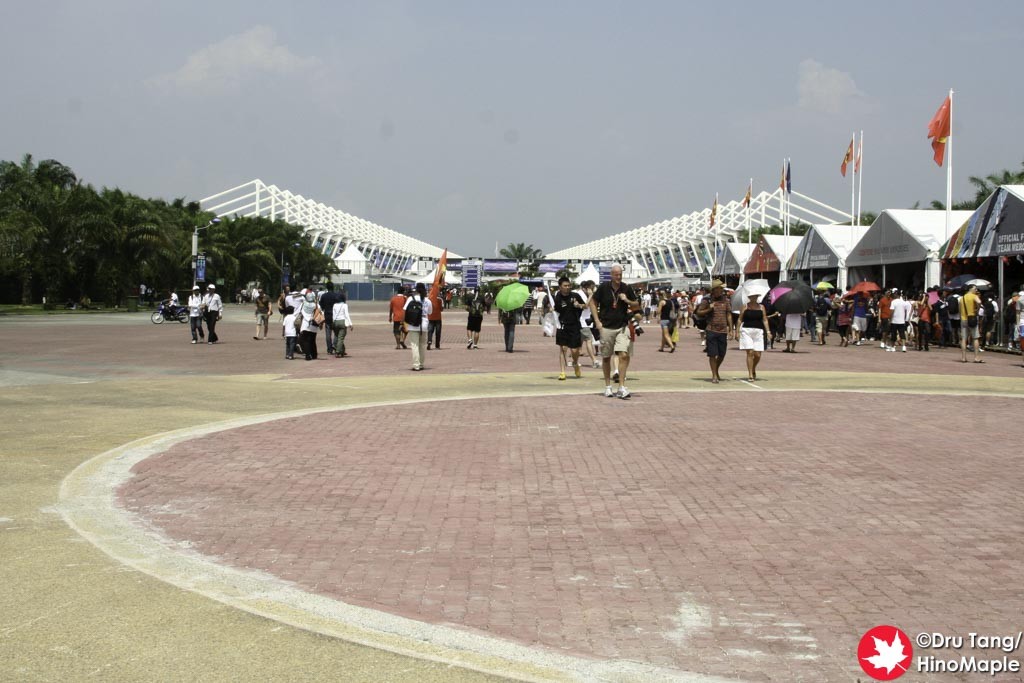 Once you are in the grandstands, you get to figure out where you are sitting, which is not very easy depending on which area you are in.  The signage was very poor for a world class circuit but that is very easy to improve if they invest a little money.  The main flaw to the design layout was the fact that the grandstands were sectioned off by security.  I had to cross security to get to my seats and to buy food, but if I wanted to go back and get a shirt or a program, I had to leave the security area.  While they did provide UV stamps so we could re-enter, it was very troublesome to get through security, and with the heat and humidity, I was worried my stamp would “melt” away from my sweat.  I do wish they had a few shops in the grandstand area, but there wasn’t a lot of space either.  While the layout of the plaza area wasn’t ideal, the seats were great.  I had a great view of the entire back half of the track from the back main grandstand.  The front and back straights were covered by a canvas roof, but the roof had two big flaws.  The first was that the roof wasn’t UV protected.  I continued to tan a bit in the sun even though I was in the shade.  It was unexpected but for a 13 year old circuit, I can’t complain too much.  The main problem was the rain.  While I was under the roof, the roof leaked a lot.  Whether it was the seam or the steel girder holding up the roof, during the rain it just dripped water all over me.  There were two or three seats that were really bad and I had the unfortunate luck to be in one of them.  Thankfully Petronas handed out free ponchos to whoever could get their hands on one and I had a small cover for the rain. 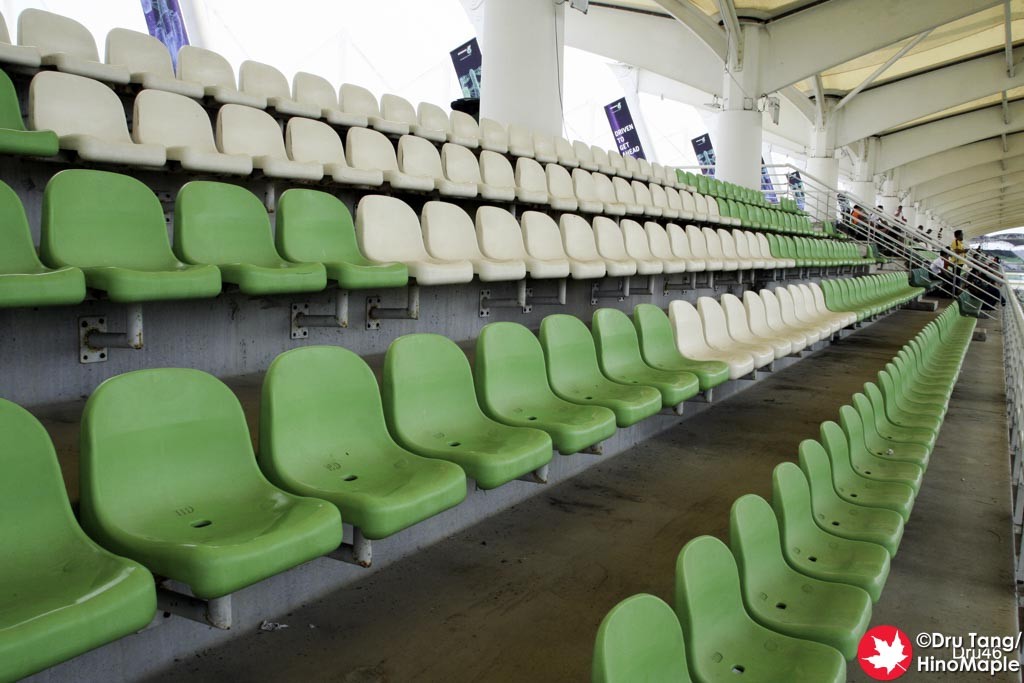 The race itself was pretty interesting.  There were 4 races that I knew of for that day.  The first was an amateur race that lasted just a few laps.  It was fun to watch but not the best race in the world.  Next was a Malaysian racing series, I think, with various GT cars.  It was a better race but half of it was run under a safety car due to a tremendous crash at the start of the race.  After the restart, it was somewhat procedural.  The last support race was a GP2 race.  It is the feeder series into F1 itself with many drivers in GP2 graduating into F1.  It is a bit of an up and down series with many drivers deciding to go up and then after failing to survive in F1 they return to GP2.  For the older drivers in F1, they tend to change series completely with little to no chance of returning to F1.  This is an unfortunately problem in F1 today with a lot of teams requiring drivers to bring sponsorship money into the team before they can be considered a member of the team.  It is an unfortunate problem of a world where the economy is still lagging and many car companies don’t have enough money to support their own teams. 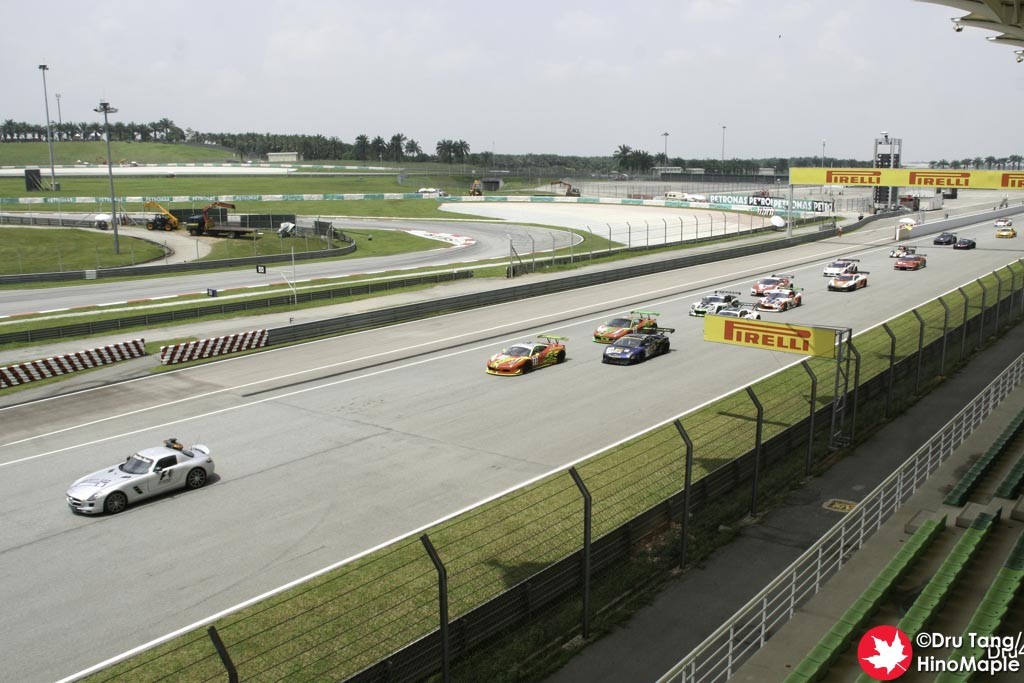 Support Race Under the Safety Car

The main event was, of course, the F1 Grand Prix itself.  The entire weekend was a build up to a race that started at 4pm on Sunday March 25th.  The hour before the race was a scorcher.  Over 30C and high humidity meant that I was sitting and sweating at the same time.  I kept as cool as I could and just relaxed for most of the day under the shade of the back grandstand.  As the race was about to get underway, a huge thundershower was rolling in.  It seemed okay at first and a little hard to see for me in my seat but some parts of the circuit had rain and others didn’t.  As the race got underway, people were cheering and watching intently.  After a handful of laps, and some frantic pit stops to change tires, the race was suddenly stopped due to the amount of rain flooding the track.  Malaysia is a country that expects rain and has good drainage but when there is a thundershower, all bets are off.  There was too much standing water so the race was red flagged and delayed almost an hour.  However, when the racing got back underway, it was very intense.  The rain was still falling when they restarted but it was lightening up.  It then stopped and allowed the track to completely dry by the end.  There were a few accidents on track but nothing that would completely stop the racing.  There was a big battle between the Sauber of Sergio Perez and the Ferrari of Fernando Alonso.  A typical David and Goliath battle where most of the people were cheering for Perez to slay Alonso and win the race.  Unfortunately, due to a small mistake at the end of the race and the team and driver agreeing to hold second place, Perez failed to win the grand prix.  It was sad but understandable for such a small team to value the safety of a guaranteed podium over the chance of a win. 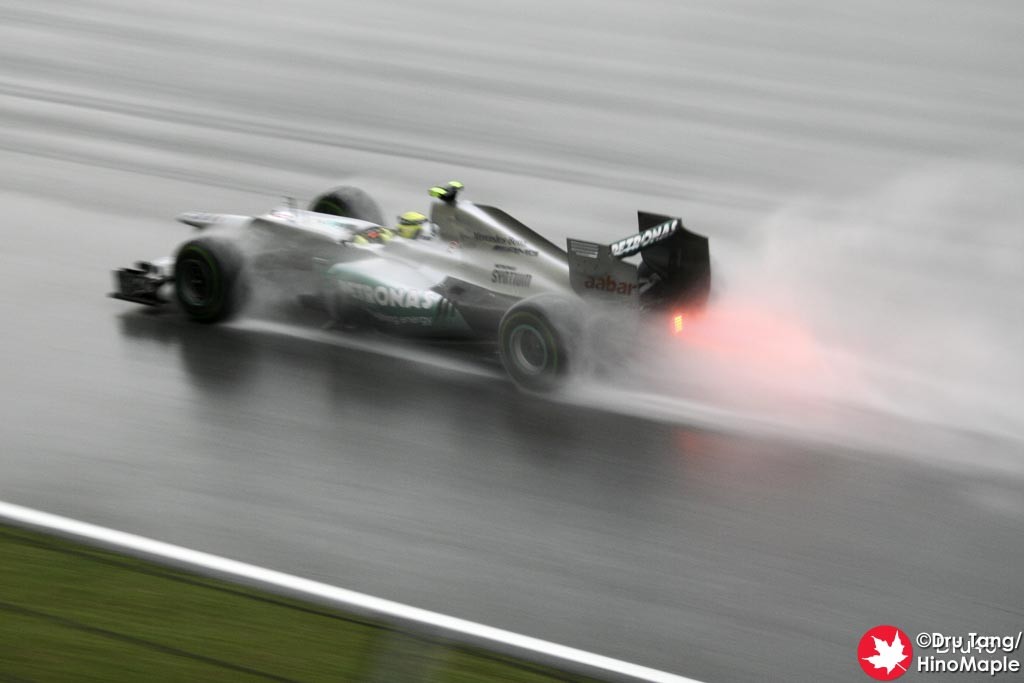 Nico Rosberg Before the Red Flag

Overall I would say the race was a lot of fun.  It met all of my expectations but unfortunately it didn’t exceed them.  My expectations were set a little low but I was expecting it to be a tough challenge to rival Singapore in terms of fun.  The circuit itself is not difficult to access and there are a lot of positives about going to a grand prix in a foreign country.  I don’t regret going to the Malaysian Grand Prix.  All of the problems I had with this race were pretty small.  While the problems were small, they all added up and they need to be improved before I consider going back for either F1 or MotoGP in the future but if they do fix enough of the small things in the next few years, I will be back for the races.  Otherwise, I’ll have to find another excuse to go to Kuala Lumpur. 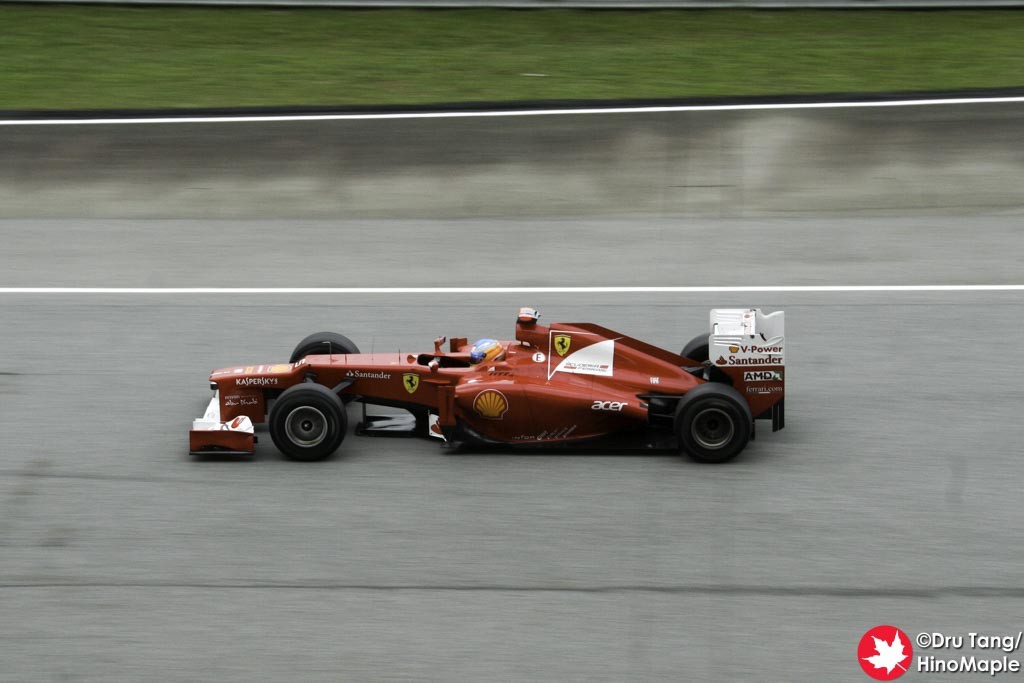 2012 Formula 1 Petronas Malaysian Grand Prix is part of a series of posts detailing my experiences of visiting various F1 races around the world.  To read more about the various races I have attended, please follow the links below: