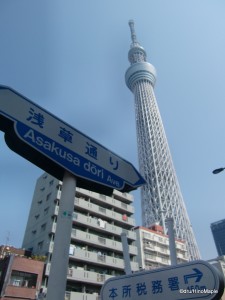 Tokyo Sky Tree is the newest landmark in Tokyo.  It is a culmination of planning and building that spanned over 5 years.  Tokyo Sky Tree was officially unveiled to the public when the designs were published at the end of 2006.  Tokyo Sky Tree is currently the tallest tower in the world and second tallest structure in the world after the Burj Khalifa.  Sky Tree was built because of the rapid growth of skyscrapers in Tokyo.  In the past, Tokyo Tower, which stands at 333m, was the tallest structure in Japan.  With an ever changing landscape and advances in technology, Tokyo Tower was quickly becoming a regular structure rather than the tall tower that was needed.  Tokyo Tower is a fully functioning TV Tower that broadcasts terrestrial television and radio programs across Tokyo.  With the large towers in Roppongi creating greater problems for Tokyo Tower, the need for a new taller structure was conceived and Tokyo Sky Tree was built. 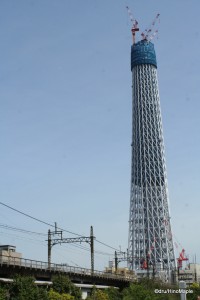 In 2008, the ground-breaking ceremony for Tokyo Sky Tree was held and the pace of construction has been furious.  Like many buildings, the foundation is the hardest part of any construction.  It took almost one complete year before the foundations were finished and the main structure could begin to be built.  From that point it was very noticeable that Sky Tree was growing daily.  It took two full years to reach a height of 600m and aside from a few moments where the tower seemed to stop growing for a month or so, it was very easy to see progress being made to the external structure of the tower.  Tokyo Sky Tree is topped by a large antenna that stands 36m tall.  The 36m tall antenna was built inside the base of the tower and jacked up to its final position.  It was about 10m from its final resting height when the 2011 Great East Japan Earthquake struck.  Thankfully the main structure held up and the tower structure was completed soon after checks were made along the entire tower. 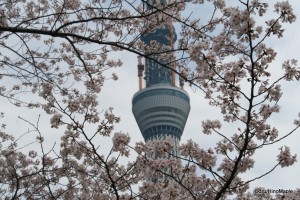 There is a lot of symbolism and technology within Tokyo Sky Tree.  The first aspect of Tokyo Sky Tree is the shape.  While most pictures will show a circular structure, it is far more complex than that.  The design was created to start as a triangular base as it slowly transforms into a circular design by the time it reaches the observation decks.  The triangular base was designed to minimize the effect of shadows on the surrounding area.  Whether this is true or not is unknown by myself as I don’t have the means to test it out.  The next piece of technology is the use of old technology.  It is often promoted by the designers that Tokyo Sky Tree was built using old ideas with modern technology.  Utilizing the ancient designs of pagoda in Japan, they created a centre column with the structure hanging from it at the top.  This allows the centre column to “float” independently from the outer structure and help protect it from catastrophic failure in the event of an earthquake.  Of course this is using modern upgrades to the design and modern technology and materials.  The final symbolism in the structure is the height.  Tokyo Sky Tree stands at 634m tall.  634 can also be read as “mu(tsu) (6), san (3), shi (4)” or “musashi”.  Musashi is the old name of the region.  Musashi Province was an area that encompassed Tokyo, Saitama, and part of Kanagawa.  It can easily be thought of as the entire region that also includes Chiba. 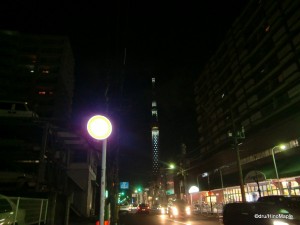 The official mascot of Tokyo Sky Tree is Sorakara-chan.  Sorakara-chan can be loosely translated as the girl from the sky.  The simple backstory of Sorakara-chan is that she found Tokyo because Tokyo Sky Tree was able to cut above the clouds and shine very brightly.  You can already find her items and souvenirs at the base of Tokyo Sky Tree before the tower has even been opened to the public.  It is a typical marketing ploy by the operators of Tokyo Sky Tree and she will definitely make money for them.  Tokyo Sky Tree is not just a TV tower.  It is also a full scale shopping complex.  The main floors are occupied by Tokyo Solamachi.  Tokyo Solamachi is the name of the shopping complex that occupies the main building at the base of Tokyo Sky Tree that stands a mere 7 stories tall.  Tokyo Solamachi isn’t very special as it consists mainly of a typical shopping mall but they have added a dome theatre and aquarium to the top floors.  It will be the focal point for the entire neighbourhood and create a bit of competition for neighbouring Asakusa and Kinshicho.  It is unlikely that the new area, coined “Sky Tree Town” by the developer will take off immediately.  It will take time to build up but it will be very popular once it opens in May. 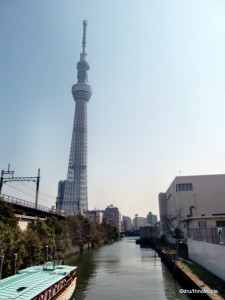 While Tokyo Sky Tree itself is complete, the entire structure and Solamachi won’t be open to the public until May 22nd, assuming there are no last second delays.  It will be a very popular destination at first and there are sure to be lines to go to the observation deck and lines to get into the shopping complex for the first year or so.  Whether or not it will give people enough reason to keep visiting is anyone’s guess.  It is likely that the complex will do well into the future.  It has the potential to draw a lot of people to the tower as it is located just a stone throw’s away from Asakusa.