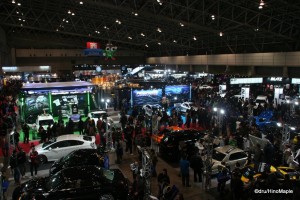 Last week I had written about going to the Tokyo Motor Show at the end of 2011.  In January 2012, a second motor show of the season called the Tokyo Auto Salon is held.  This is a very different car show compared to the Tokyo Motor Show.  The Tokyo Motor Show is a typical auto show that focuses on new cars and concepts from the major car manufacturers.  The Tokyo Auto Salon is a tuner car show that is similar to the SEMA show.  For those who are unfamiliar with the auto industry, a tuner car is any car that has been modified from its original form.  This can be anything from upgrading engine parts, changing the paint or any other part of the car.  It can be very subtle to very crazy.  The Tokyo Auto Salon is the best way to see all of the potential craziness people can do to their own cars. 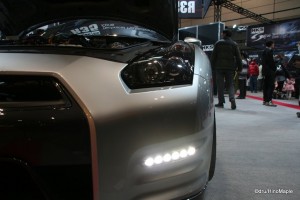 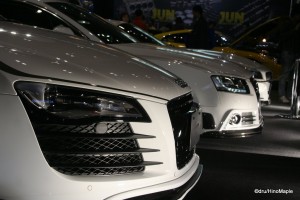 As I mentioned, the Tokyo Auto Salon is very different to the Tokyo Motor Show.  It focuses on tuner cars.  The entire Auto Salon in 2012 was loosely divided into sections.  There were the custom car areas, the manufacturer custom car division, accessories, sound systems, paint, and custom car displays.  While there are many sub-sections in each area, they generally kept close to their theme.  All of the major Japanese aftermarket tuners were at this show.        Many of the well-known Japanese aftermarket companies such as VeilSide, Tommy Kaira, and HKS were present at the show.  Wheel and tire manufacturers such as Bridgestone, Yokohama, BBS, and Rays were also present.  You could easily spend hours just visiting these booths to see what new and innovative products they had.  Each company had their own theme.  HKS was very much performance based while VeilSide was all about looks.  The major Japanese manufacturers had their own booths as well showcasing the products of STi, GD, Nissmo and others.  These names may not seem very familiar but companies like STi stand for Subaru Tecnica International.  They are subsidiaries set up by their parent companies to be somewhat independent but loyal to their parent company.  In fact, most of the companies were fairly loyal to one or two manufacturers.  RE Amemiya is a well-known tuner company that is known for their ability to tune Mazda RX-7s and RX-8s.  It provided a lot of variety into the designs of each car that can be both a blessing and a curse. 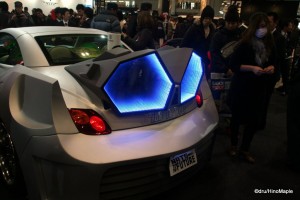 Nats to the Future

The other aspect of the show is to showcase individual cars.  At the Tokyo Auto Salon, some of the aftermarket companies brought cars to be judged.  Other individuals from around Japan also brought their cars to be put on display.  Most of the cars on display in the general area were street legal.  By far the most memorable was one by NATS (Nihon Auto College).  It is a school that teaches the students how to fix and modify cars.  They modified a Lexus SC430 (SoarerZ40 in Japan) to be a modern take on the original DeLorean from the “Back to the Future” movies.  It was a work of art and craftsmanship that was nearly unmatched in the entire show.  There were other great examples of their work that was present in the auto show but that one still sticks out in my mind.  NATS is a great college that probably doesn’t get much attention overseas.  It is a very creative group of students and teachers working together like a master and their apprentices.  In fact, I would say that most of the companies at the show acted in a very similar way.  From my very limited knowledge of the aftermarket industry, a lot of it is art with a healthy dose of mechanics.  With enough time and money, you could create anything you wanted but you still need the ideas to make something good. 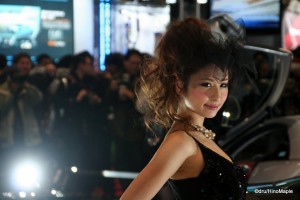 One other aspect of the show is the women.  No auto show would be complete without having beautiful women posing in front of the expensive cars.  The Tokyo Motor Show was the same yet very different.  The women at the Tokyo Motor Show had to either fit in with the theme of the manufacturer.  Many times you would see women in the strangest costumes just to fit the theme.  At the Tokyo Auto Salon, that seemed to be less apparent.  Most of the women at the show were there to get as many people to their booths.  You could tell which booth had a woman modeling by the crowds surrounding them.  If there was a large crowd, it was highly likely that there was a woman there.  It was a bit sad as the most beautiful women, rather sexy looking, were getting the most attention.  The women who dressed in a regular way or those who didn’t go the extra mile to look beautiful or sexy didn’t get large crowds of men with cameras in front of them.  It is an unfortunate part of life that men usually think predictably.  Each booth that had girls had a slightly different taste but in general.  When you see a few booths, you have basically seen all of the girls as they all have girls that are differentiated by the colour of their clothes and a little difference in taste or style but generally it is similar and gets numbing after a while. 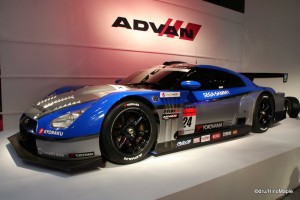 There are several final thoughts I have about the show itself.  My first thought is that it was cramp and crowded the entire time.  At the Tokyo Motor Show, I had a lot more energy to see the entire show whereas at the Tokyo Auto Salon, after an hour or so I was exhausted.  I would also say that the types of people that went to the show were different.  The Tokyo Motor Show is geared towards the average person.  I saw more families at the Motor Show compared to the Auto Salon.  I also saw more young people and “gangsters” at the Auto Salon.  While I would not say that they are gangsters, some of them did fit the bill in terms of style.  There were also more camera geeks who would do anything to push their way forward to get dozens of photos of the same girl.  It was annoying and difficult to manage.  For those who love fixing cars and seeing tuners, I highly recommend visiting the Tokyo Auto Salon.  In fact, you might enjoy it a lot more.  Unfortunately, since it is a tuner crowd, expect to see a plethora of Nissan GT-Rs, Toyota Prius’, and Mazda RX7s.  It is an unfortunate reality that domestic cars will get more attention as it is cheaper to buy a domestic car than an imported car and easier to get parts for it.  Either way, there are some great cars to see and if I had the time and patience, I would go for a second day as well.