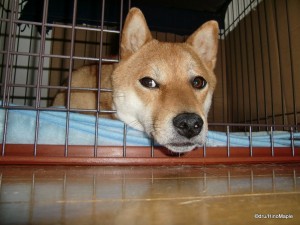 If any of you have checked out my other blog, “A Sox Life”, you will know that I had gotten a dog in December 2010.  I have been an avid dog lover since I was young and had a dog for most of my life.  I have spent years without a dog in Japan, but I always had one back home in Canada.  It is a difficult but happy event to get a dog in Japanand I never regret getting a dog.  Owning a dog, or a pet, in Japancan be a very complicated process.  The actual process of getting a pet and keeping them in your house/apartment is simple enough but it’s difficult to be done officially.

The first hurdle one must jump is the need for a place that allows pets.  For anyone looking for an active pet such as a cat or dog, you must find an apartment that allows pets.  Before moving to the east side of Tokyo, my apartment didn’t really allow pets.  The initial contract said pets were not allowed but after asking the company that leased the apartment to us, they said a small pet was okay.  My dog, a Shiba, is a medium sized dog in Japan, yet he is on the small side of that scale.  My old apartment was too small for a dog anyways so we found a place that did allow dogs, but my current apartment owner says that cats are not allowed.  Small dogs are fine, and he said a Shiba was fine too.  When getting a pet, you typically add an extra month or two worth of deposits.  This is due to the increased costs of fixing the apartment due to having a pet.  While it seems simple to find an apartment that allows pets, this is a very difficult thing to accomplish.  In a completely unscientific method based on my memory, 98% of all apartments don’t allow pets.  The ones that do typically allow only small pets, and if you have a big dog, you can almost forget about finding a place anywhere in Tokyo.  It is almost necessary to own your own house.  Even apartment owners are restricted by the building rules and they typically restrict the size of a pet. 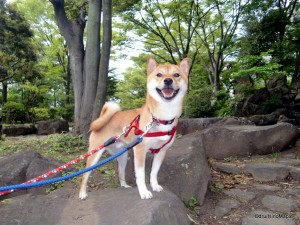 The second hurdle is to find a pet.  There are several places to get one.  The typical pet shops are the easiest, albeit expensive, places.  Personally, I refuse to purchase a pet from a pet shop due to the way they keep their pets.  The small boxes with windows where customers constantly bang on the window and the poor state they keep their pets is saddening to me.  I believe the major shops in Japan do a good job during the day but at night, who knows what they do.  I have also seen some of the small shops that are terrible.  When getting my dog, I looked at a website/NPO called Chiba-wan.  They are a group of volunteers that adopt cats and dogs from shelters and bring them to twice monthly events.  One event is geared towards small and medium sized dogs, and the other is for all sizes.  It’s a very well run organization and a network of nice people.  There are many other organizations but they are the only ones I know.  Typically, it will cost about 40,000 yen to get a cat or dog from them.  This is mostly in gifts and reimbursements.  Sox was adopted by the volunteer and he had to be neutered.  He also got an electronic chip inserted under his skin and the volunteer had to pay for food and such for the time he was with her.  Typically a person who is adopting the cat or dog will give a “thank you” gift of money to compensate the volunteer for the surgeries and food as well as a few other supplies so they can use it for future rescued pets.  Unfortunately the organization cannot rescue every pet as some are not capable of being adopted.  Some are too old and some are not cute enough.  Some are also too aggressive.  It is unfortunate but it is the only way for them to operate as there aren’t enough volunteers for these unwanted pets.  Some of the volunteers will rescue up to 5 pets on top of whatever pets they already have at home. 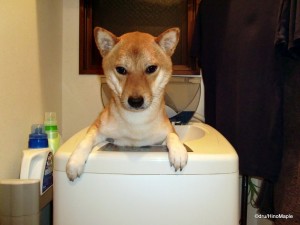 The only way to wash a dog... (Note: I didn't actually wash him here)

Once you adopt a pet, you have to register them.  For me, I had to wait a month as a trial period.  In this time, I can change my mind, but within a week, I knew he was going to be my dog forever.  It took a long time to register him, but it’s a very simple process.  Taking a few documents to the city hall and finding the appropriate window was simple.  My city actually has a dog event where they vaccinate and register dogs all at once.  It was pretty convenient to do it.  After that time, he was mine and everything was fine.  Of course that is just the beginning as with any other pet in any country, you need constant “maintenance”.  Finding a vet, a pet store for food, and other things like that take time.  In Tokyo, there are very few shops that sell pet items.  I found many places had a pet corner but the variety of goods sold was for small pets such as a chihuahua.  It took a month or two before I headed to another station and found a large pet store.  They had everything I needed and pets were welcome inside the shop.  Unfortunately I can’t bring my dog there as it’s a little far.  Thankfully it is probably one of only a few places that have a wide variety of items. 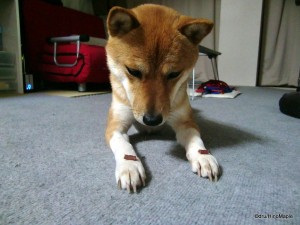 When owning a pet, you eventually have to leave your home and go somewhere else, be it for a vacation or to move.  It can be difficult to find a way around if you don’t have a car.  If you have a car, there is almost no limit in where you can go.  Without a car you are limited to where you can walk.  With my dog, that is roughly 5 km.  It can get a bit difficult to go places and with him, it’s difficult to take him on a bicycle.  Of course I can hold him but my cycling skills are no where near good enough to hold him in one arm and cycle at the same time.  I could put him in the basket but then I have to worry about him jumping out.  I’m also worried about him taking off as I ride the bicycle or him darting out in front of the bicycle and me hitting him if he runs alongside me.  It’s a difficult challenge that is not easy for either of us.  For those with a cat, it might be easier as using a hard cage isn’t too bad.  The other option is to get a cage and carry him around.  Unfortunately, it isn’t as easy as it sounds.  Having a big cage is heavy and cumbersome.  Sox is a little small but at just under 10kg, he isn’t light over long distances.  I could always purchase a stroller for cats and dogs but they are very expensive.  In reality there isn’t an easy way to travel with a pet if you don’t have a car.  If you have a very small dog though, it can be much easier as you can just stuff them into a bag and you are done. 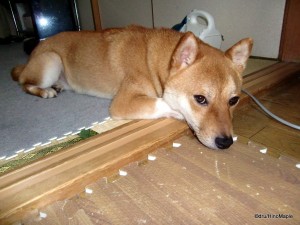 For those looking for a less traditional pet, things can be much easier.  Most apartment owners say no pets, but hiding a small pet is much easier than a cat or dog.  Cats can scratch a lot of things, and dogs can be noisy.  A small pet such as a gerbil or a small rabbit are much easier to maintain.  While you still have to clean up after them, as long as you have a cage and a few other things to keep them happy, you don’t have to worry too much about them destroying your apartment.  They don’t need to be walked everyday so the chances of the owner seeing your pet is also much lower.  Snakes, bugs, and fish are very similar as well.  As long as you can hide them in your apartment without the owner knowing, it isn’t difficult to keep one.  In Japan, I’d say fish are the third most popular pet with gerbils/hamsters/mice also being up there.  For many kids, they love to keep Hercules beetle or a giant horned beetle.  They often have a huge fascination with them and you can often buy them at shops around Tokyo. 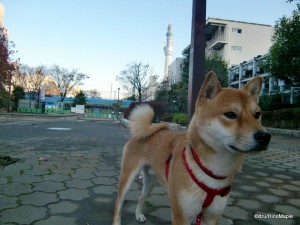 As a dog lover, having a dog is a life changing event.  It is almost always for the better.  Having a pet in Japan made me wonder how different things would be compared to Canada.  Aside from the need to find an owner who will allow us to have a dog, there really isn’t much trouble finding a place.  The only other problem is manners.  Carrying a dog to and from our apartment isn’t always easy and how to react when you meet other dog owners isn’t always set in stone.  It’s pretty similar and a dog lover in Japan is almost the same as a dog lover in any other part of the world.