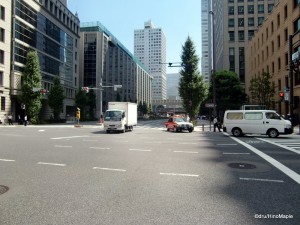 Otemachi is a small business district north of Tokyo Station.  By all means, it is not a place most tourists would ever consider visiting.  It is an area that is virtually shut down on Sundays.  It is devoid of any open shops and restaurants which makes looking for food a near impossible task.  While there is almost nothing to do on the weekends, it is an interesting place architecturally and they do have various events scheduled in the area. 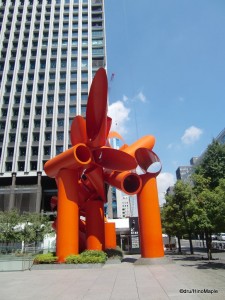 The first thing to understand when visiting the Otemachi area is to learn how to get around.  For most people, entering via Tokyo Station will be the easiest.  Entering via Otemachi Station will also be easy, but the labyrinth of underground passages makes this a very daunting task.  The street is much easier to get around, but due to the changeable weather at times, this is not always feasible.  Being close to the Imperial Palace, it is often rumoured that most of the tunnels around Otemachi were originally built in the build-up to World War II and that there are several secret tunnels still remaining.  Unfortunately, a walk through the tunnels of Otemachi is nothing interesting.  It is a typical labyrinth of access tunnels that will get you lost.  Otemachi Station itself is situated in a square shape around one block making transfers from one line to another very inconvenient. 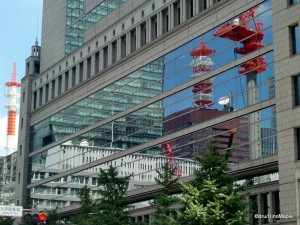 Construction is visible around Otemachi

Otemachi is one of the oldest areas of Tokyo and it is currently undergoing revitalization.  In many areas of Otemachi, you will see various construction sites and buildings in various degrees of completion.  Some of the older buildings will be around for many more years, but like the neighboring Marunouchi district, the old buildings have been destroyed or in the process of being destroyed.  If anything, you can get a great sense of Tokyo’s construction industry and how it functions when building high rises.  When visiting some of the newer buildings, you can find a lot of surprises.  The older high rises are generally closed to the public, but newer buildings are open with shopping floors in the basement.  As Otemachi continues to be revitalized, it is looking less and less distinct from neighboring Marunouchi and will soon be indistinguishable. 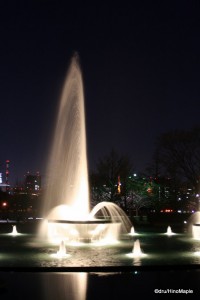 Otemachi, for tourists, is well known for being located at the entrance to the Imperial Palace East Gardens.  A short walk across the street from Otemachi is the main entrance to the East Gardens.  Located adjacent to the entrance is the Wadakura Fountain Park.  It is a beautiful park with many fountains.  It is just as beautiful, if not more, at night when the fountains are lit up.  While these are the large parks in Otemachi, Otemachi also has many tiny parks and areas to relax.  Similar to Marunouchi, this area has many secrets waiting to be discovered if you look for them. 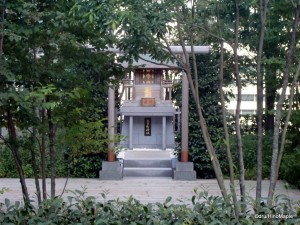 As I mentioned in the beginning, Otemachi is an area that can easily be skipped by a typical tourist.  Neighboring Marunouchi has more things to do while Otemachi is a true business district.  There are many offices in the area and very little else.  Most people will just pass through on their way to the East Gardens and that’s pretty much it.  For those living in the area, or rather working in the area, it can be a treasure trove of secrets.  You can find passages underground that you never knew existed.  You can find small parks that are populated only by people working the surrounding buildings.  You can also find the typical “slaryman” of Japan.  Unfortunately, you won’t see them in their natural after work environment, the bar.  For that, you’ll have to walk across Tokyo Station to the Yaesu district.