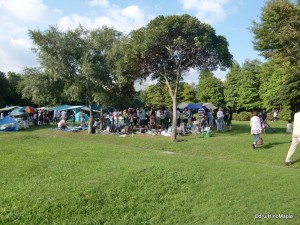 One of the few barbecuing areas in Tokyo

Tokyo is a tough place to barbecue.  Barbecuing back home in Canada involved a gas grill, a bunch of friends if they are available and a selection of meats and salads.  When someone wanted a steak, it was pretty easy to fire up the grill, throw on a couple steaks, and within 15 minutes, you were ready to eat.  No need to really do any preparations.  If you had a party, of course you had to prepare a lot but not that much.  If you wanted something good, you would have to marinate the meat overnight, and prepare all the vegetables and salads.  Grilling in your backyard was a very simple affair and something that people routinely did.  Tokyo, a city where there are relatively few, if any backyards, and if someone does have a backyard, it is usually very small.  Land space is expensive and prohibitive to having large yards.  Barbecuing in Japan presents its own unique challenges that must be met head first. 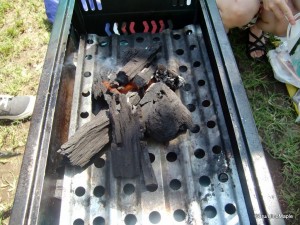 The first thing one must learn is that barbecuing in Tokyo is essentially illegal.  You cannot set up a barbecue on the side of a river or in a park.  It is illegal to have an open fire within the city limits of Tokyo.  Whether that applies to private property or not is unknown to me.  I have seen people with somewhat larger yards and balconies where they can barbecue, however being Tokyo and Japan, you do have to be aware of your neighbors.  One of my friends had bought a grill and started to barbecue in front of his house, outside his front door.  While the street in front of his house was primarily for pedestrians, as cars would not fit, his neighbors were polite but complained quickly.  After using it once, he never had the opportunity to use it again.  The only legal place to barbecue is within one of the city’s parks.  There are websites that direct you to the various parks within the city that allow people to barbecue.  Since Tokyo is such a large and dense city, they require reservations before you can barbecue at these sites.  The only problem is that these locations fill up very quickly and are usually reserved months in advance.  Unless you have connections or a bit of luck, you won’t be getting into these locations.  It can be a hassle to find a place in Tokyo for a barbecue, but thankfully there is one last emergency measure, an illegal barbecue.  There are just a few places around Tokyo where you can safely, yet illegally, barbecue.  I don’t recommend it but there are lots of people who do it. 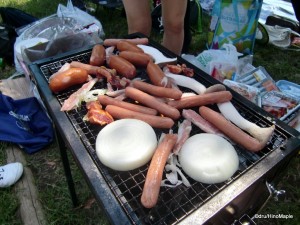 Grilling in a group is organized chaos.

The food and cooking style at a Japanese barbecue is slightly different compared to a typical American style barbecue.  I’m used to hearing about people grilling burgers, steaks, and hot dogs.  In Japan, it can be similar but in a very Japanese way.  I often see Korean style barbecue meats, or thinly sliced meats.  Seeing seafood is also very popular in Tokyo.  Vegetables tend to be the same.  Just putting raw vegetables on the grill and letting them cook.  Like most barbecues, you can grill almost anything you want.  One of the bigger problems with grilling in Tokyo is getting the fire started.  Coming from Canada, there is only one person I know of who has a traditional charcoal fired grill.  He has all of the items from the charcoal heater to the good charcoal.  In Tokyo, I had to learn how to set up a grill and get the fire going.  It is very common for people, including myself, to just buy charcoal and grab a bunch of old newspapers and figure it would be easy to start the fire.  I was very wrong and the first barbecue I had, it took about an hour to get it started!  The second time on was much easier for me.  I knew the idea of how to start it, but having a starter fuel is idyllic.  At the end of a Japanese barbecue, noodles and vegetables are brought out.  All grills come with a flat pan that is heated to create a griddle.  This griddle is used to cook yaki-soba.  Yaki-soba is a very traditional end to any barbecue in Japan.  If you ask any Japanese person what they should have at a barbecue, especially as a last dish, they will almost certainly say yaki-soba.  While I don’t like it, it is very common in Japan and should be expected. 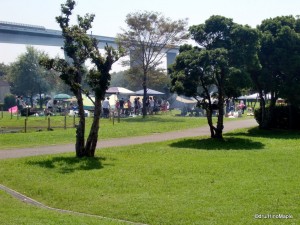 Like any barbecue, in the end, there are no rules in what you must do or how you do it.  A barbecue in America/Canada is essentially the same as one in Japan.  While the food is different the idea of getting together with a group of friends to enjoy a beautiful sunny afternoon is no different.  The logistics are much harder in Tokyo but on the plus side, you can drink alcohol in public so having a beer or a glass of wine at a barbecue is perfectly acceptable.  Having a loud group of friends laughing the afternoon away is no different between Japan and North America.  If you ever get a chance, you should try having a barbecue in Japan.  If you can’t have a traditional barbecue where you grill outdoors, you can always go to a yakiniku restaurant instead.  It doesn’t have the same appeal, but it is better than nothing, and you don’t have to prepare anything.