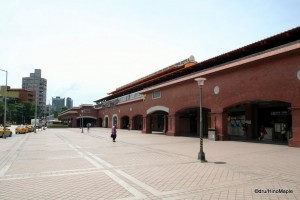 Danshui is a small resort town north of central Taipei.  It’s roughly 40 minutes north by train on the Danshui line.  It is pretty easy to get to Danshui but it does take a bit of time.  It’s a nice day trip to get out of the city and enjoy the coast.  Spending an entire trip in only Taipei itself can be a little daunting as city life can get a little stressful.  Danshui is the opposite.  It is a relatively tranquil area where life seems to slow down.  Danshui is known as a place for couples and it’s more famous at night.  It is also famous for being the hot spring town of Taipei. 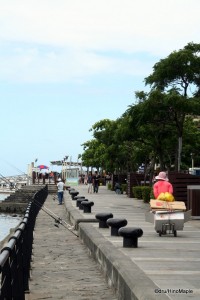 The first area people will explore from Danshui station is the waterfront.  There is a long coastal road that is lined with various little shops.  As you walk from the station you will see the mouth of the river as it begins to open up to the sea.  The road is pretty small and only local traffic uses it.  There are several shops with various amusement park style games such as basketball.  The entire waterfront is not complete as they were doing construction in many areas.  My guess is that they are trying to create a walkway from the station all the way to the Fisherman’s Wharf which is about 3km away from the station.  About 500m from the station is a small ferry pier which has ferries taking people across the river to “Bali” or up the river to the Fisherman’s Wharf.  I suggest taking the ferry to go up but we decided to walk so we could see more things. 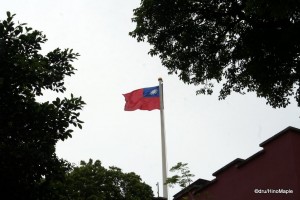 About a third of the way to the Fisherman’s Wharf is an old fort called Fort San Domingo.  It was constructed by the Dutch but from what I was reading, it was controlled mostly by the Portuguese.  I could easily be wrong as there was little information in English.  The actual fort itself was pretty interesting.  It is built on a small hill and the fortifications were simple.  The main fort was a simple castle like structure that housed a few rooms.  Within the complex, there were a few other buildings, constructed of brick.  You can freely walk around the complex and enter the various buildings.  There is a lot of information in English but very little was of interest to me.  It was mostly historical and from my memory, little explained the nature of each room we visited.  When I visited, they also had a special exhibition on Canada which was a little nostalgic for me.  I’m sure they switch the exhibitions from time to time.  It wasn’t a big exhibition but large enough to give people a glimpse into Canada. 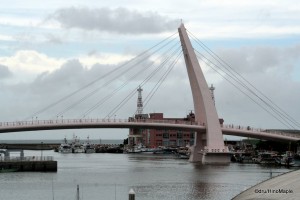 The other area of interest is the Fisherman’s Wharf.  It is located roughly 3km north of the station and it is a long walk.  I would highly recommend taking either a bus, the passenger ferry, or to rent a bicycle.  The entire wharf area is a big tourist trap.  It is popular among couples as it is a very romantic setting.  In the daytime, families are more prevalent, as are tourists.  It is more famous at night due to the lights.  The focal point of Fisherman’s Wharf is the Valentine Bridge.  It is a pastel pink bridge that is lit up at night and reminiscent of many other standard bridges in Eastern Asia.  While it is just a pedestrian bridge, it is fairly large for a pedestrian bridge.  You will see dozens of couples taking pictures in the area.  There are even several restaurants and bars on the main floor of the wharf for people to enjoy themselves.  If the noise is too much for you, it isn’t hard to walk a minute away and see an empty area.  It is a remote area of Danshui so other than the main central areas, there aren’t many people. 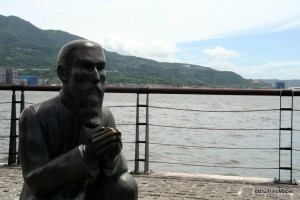 Art on the Waterfront

I mentioned that Danshui is a famous hot spring area of Taipei.  There are several hot spring hotels where you can relax and enjoy the hot spring water in your own hotel room.  From what I saw, there aren’t many onsen like bath houses.  Instead, they have expensive resort hotels with beautiful rooms and private baths.  If you have the time, I think it is a great place to visit.  Unfortunately I didn’t visit the resort hotels, but a friend of mine did.  She said the water was great and she enjoyed multiple baths during her one night stay.  From the pictures of the hotel, I think it was a great location and if I get a second chance to visit, I will probably try to stay a night or two in Danshui.

Danshui, Taiwan is part of a multi part series of my trip to Taiwan.  Please continue reading about  Taipei and Food in Taiwan.