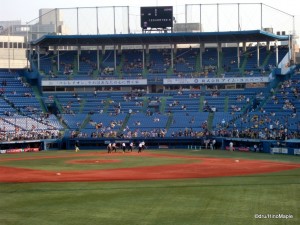 It has been a few years since I had last been to a baseball game in Japan.  I had always wanted to watch another game, and in fact I enjoy going to these games every year if possible.  It is not an easy task to get to a game and the two times that I did visit, they were different games.  The first time, I went to Chiba Marine Stadium in Chiba to watch the Chiba Lotte Marines.  That time I was somewhat behind home plate.  The next game was at Meiji Jingu where I watched the iconic Hanshin Tigers take on the Yakult Swallows.  I was sitting in the Tigers reserved seating near third base.  Both of those games were fun and exciting and I was able to enjoy the game as well as the fans.  On August 14, 2011, I watched my third baseball game.  It was the same game as before, Hanshin Tigers versus Yakult Swallows.  I was at Meiji Jingu again, but this time I was sitting in the outfield. 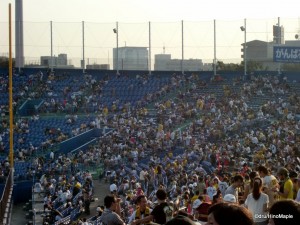 The outfield area is an open area where people can sit anywhere they’d like.  You basically show up when the doors open and grab a seat anywhere that is available.  Being a Sunday game during obon, I decided to head there early, but it was not early enough.  I arrived about 10 minutes after the gates opened.  There were no lines but at the same time, there were no seats.  Lots of people reserved seats and the only seats available were singles.  I was lucky enough to find a couple seats open in the top corner of the outfield.  Since I was in Meiji Jingu, it didn’t really matter where you sat as almost all of the seats were good.  While my seats were a little far from the infield, it was a good vantage point as I nearly had the same view as the pitcher.  It was much easier for me to tell if the pitch was a strike or a ball.  This made analysing the throws much easier. 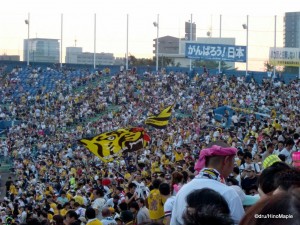 Fans are cheering at full force.

If you read any of my previous posts, you will know that the outfield is reserved for the hard core fans.  This is where people stand and jump all the time.  There is a small section for people to stand up in the back and there is usually a trumpet band as well.  This game was no exception.  It was literally standing room only.  The people around me were all crazy supporters.  A couple rows in front, we had a major Hanshin Tigers fan who would do a dance and help lead the cheers for each of the batters.  He constantly wore puppets on his hands.  These puppets were of the Tigers mascot and he would do a little dance with them.  Behind me, standing on the railing the entire game, was a typical Hanshin heckler.  He was hyper critical of the play.  He would shout crazy things and I think some of the kids shouldn’t have heard some of it.  To give an example, one of his more interesting rants was to tell the catcher to use his beautiful face to get a hit.  That way he would walk out to first base.  He taunted the Hanshin players when they made a bad play as well as the Swallows.  His “anger” was focused almost completely at the Hanshin players.  Hanshin is infamously known for having the most loyal, yet aggressive, fans in Japan. 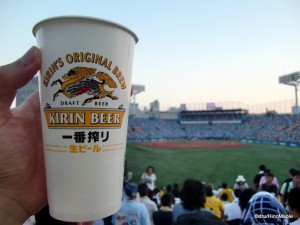 Beer, while expensive, is a tradition of mine at baseball stadiums.

While the hecklers are always present at the game, sitting in the cheering section was a brand new experience.  There is an energy that I can’t explain.  When I was in the reserved seats a few years ago, I was cheering with everyone but it wasn’t as loud.  The people weren’t really doing their best.  It was strange when we chanted for the ball to come as behind third base would have been a foul.  In the outfield, it was very natural to do it.  I learned a very valuable lesson as well.  For Japanese baseball, the fans carry plastic megaphones.  This isn’t so they can yell better, although this does happen.  It is so they can cheer and be noisy without clapping.  As I didn’t have my own set of megaphones, I had to clap only.  By the end of the game, my voice was raspy and my hands were red and in pain from all the clapping.  I highly recommend visiting the park and going to the fan section as you will get a completely different experience. 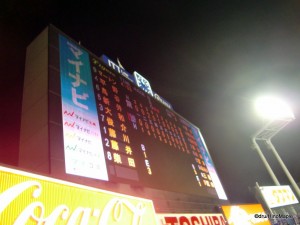 The game itself was very long.  It lasted over 4 hours to complete the standard 9 innings.  It started off well with Hanshin getting a 2-0 lead.  This eventually became 3-1 by the end of the first half of the game.  There were a lot of hits for both sides and a lot of misses.  Hanshin had capitalized on a few errors throughout the game but the final inning provided a lot of drama.  Hanshin had converted for 5 runs at the top of the 9th.  They were doing really well and all of the players were hitting well.  They had the game in the bag until the Swallows came up for the bottom of the 9th.  The crowd was ready to go home and call it a night but the Swallows had other ideas.  A couple of poor errors by the Tigers, along with 2 pitcher changes in one single inning lead the Swallows to come back.  For a tense 3 player run the score became 8-7 in favour of the Tigers.  The crowd were chanting “Only one more person”, then “Only one more pitch”.  It was heartbreaking to see Hanshin fail to get the necessary outs before they final player was finally struck out.  It was one of the tensest games of the night and Hanshin ended on top. 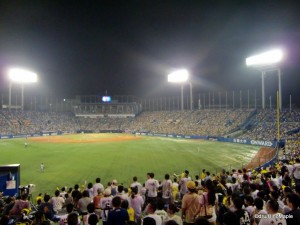 Watching baseball in Japan has always been fun for me.  I never expected it to be fun as I never enjoyed baseball, but going to a game has been fun since I went to my first game.  Sitting in each area is very different.  The “serious” people tend to sit behind home plate.  They don’t cheer so much but they are interested in the game.  Some of them are corporate seats/tickets, so the people aren’t as connected with the game or team as other fans are.  As you move to the reserved seats on the side, you have people cheering all the time.  They are also more serious but they are also fans of the teams they support.  Wearing the wrong colour in this area is a bad idea.  The outfield is where all the action is.  You will get the big fans wearing all of the crazy costumes.  You will see all of the flags being waved and be in the middle of the loudest cheering area in the stadium.  Each area is different and it is worth trying each area.  For a tourist just visiting Tokyo for a short time, I recommend getting reserved seats.  That way you can show up a few minutes before the first pitch and use the free time to do some sightseeing.  For others, the free seating area is great.  You can get there early, enjoy a few drinks, and just soak up the atmosphere.  Either way you will be entertained.

Japanese Baseball (Yakult Swallows VS Hanshin Tigers) (2011) is part of a series of posts on baseball in Japan and my experiences going to various games.  To read more about other games I have experienced, continue with the posts below: