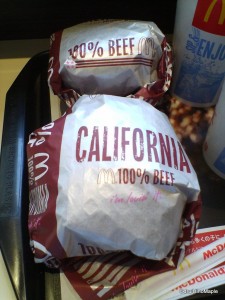 I mentioned that fast food burgers are a fusion of American and Japanese style foods.  In this post, I focus a lot more on the more traditional style of fast food burgers in Japan.  While they may not be as unique in the burger department, they do offer some interesting fare that should be checked out.

First Kitchen is to variety as MOS Burger is to quality.  First Kitchen has the largest variety of menu items of any of the major fast food retailers in Japan.  The standard fare at First Kitchen is the burgers.  Their unique take on the traditional burger is to slap a fried egg on top of everything.  The entire burger feels more westernized, in other words, dripping in grease.  It’s a nice way to enjoy a burger, but if you are thinking about a diet in any way, this place is the last place you want to go for a burger, aside from Lotteria, but I’ll get into that in a minute.  First Kitchen also has a variety of pasta dishes, hot dogs, and french fries.  Do be aware that there are two styles of First Kitchen shops.  One is the stand alone shop, which offers more variety, and then there is the shopping mall shop, which is more akin to a basic shop without as many options.  For me, the biggest draw has to be the french fries.  Unlike the other shops, First Kitchen offers various flavour powders.  The menu will be in Japanese, but they do have basic flavours such as barbecue.  Some of the more basic flavours you should try are the cream corn (corn pottage), consommé, and black pepper.  There are many more, and I’d highly recommend just ordering a bunch among friends and digging in.  They also offer free dipping sauces for fries, or you can add it to a burger if you wish.  These are usually located in the sauce bar near the cashiers, or trash bins, but not on top of the trash.  Basic flavours such as ketchup and barbecue are offered, but so are garlic mayonnaise and spicy mentaiko (fish eggs) mayonnaise.  It may sound disgusting, but it isn’t bad.  Like the fries, just grab a bunch that sound nice and try it out.  The powder/dipping sauce combination will vary and I have never found a single dipping sauce that goes well with every flavour of french fries. 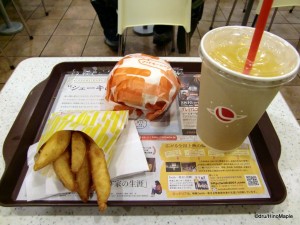 Lotteria is not exactly a Japanese fast food chain, but rather a Japanese-Korean one.  Lotte, the parent company, was started by a Korean man in Japan, before expanding into Korea.  Lotte is a dominant force in both South Korea and Japan, but the Lotteria chain is bigger in Korea.  Personally, I’m not a big fan of Lotteria.  Their burgers tend to be greasy, but they tend to change their menu often.  In general, their menu isn’t spectacular either.  It tends to be more middle ground than anything special.  They do have your typical Teriyaki Burger and Shrimp Burger.  They also add an egg on top if you’d like.  French fries and fried chicken is also on the menu, but these are also basic items.  There is generally more variety than McDonald’s, but they lack the ingenuity to create truly unique products.  McDonald’s Japan has a better chance at making unique products.  All in all, it’s nice to visit Lotteria from time to time, but in reality, I find it mediocre at best. 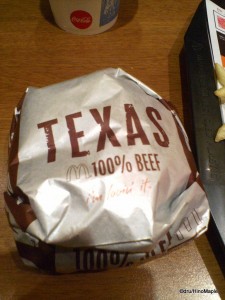 McDonald’s in Japan is like any other McDonald’s in the world.  They haven their own set menu, plus regional specialties.  Ronald is also a short Asian guy in Japan, compared to the tall American that you see in commercials.  The major menu items such as a Big Mac and Quarter Pounder are the same, but add a Shrimp Fillet-O and Chicken Fillet-O, and a Teriyaki Burger to the menu and you have McDonald’s main menu.  Each month, they also add limited edition burgers.  These vary from month to month, but every September, they release the Tsukimi Burger.  This is a basic burger with a fried egg on top.  It is one of their better offerings.  If you are in Japan for a longer visit, do check out McDonald’s and see if there is anything interesting that month.  You never know what you’ll find, and you may be in for a treat. 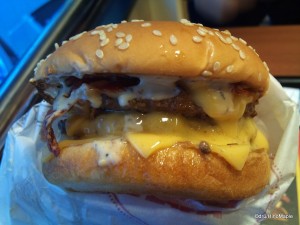 Fast food in Japan is great.  It can be healthier, but the options are there if you know where to look.  It’s also very easy to order.  Most shops have English menus as well.  Unlike restaurants, most shops have picture menus at the cashier, so you can easily point to what you want.  Generally, I only have problems when they ask something unusual such as “what flavour fries do you want”.  If anything, just follow some of the links and you’ll get all the information you need.