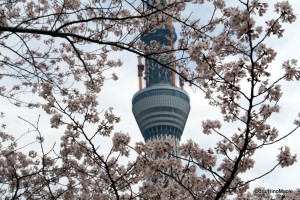 It is officially the end of the sakura season for 2011.  The sakura season began in early April and lasted for just under 1 week for the full bloom.  This year has been a very mixed year in Tokyo and Japan due to the Great East Japan Earthquake.  The sakura season in Tokyo and Japan are no exception either.  While things had started to return to normal at the start of April, things were not completely back to normal.  The state of Tokyo itself was still in a mild state of shock and the history of the cherry blossoms had reminded people of the traditional stories that had been passed down from generation to generation and taught in various textbooks and media. 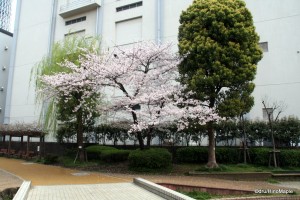 Aside from the actual beauty of the cherry blossoms, there is a lot of symbolism and many stories.  I have heard a lot of these and only found a little information in English that was easy to research and find information on.  Mortality is the main symbol of the cherry blossoms.  They have been a symbol of our mortality and how life can be very short yet beautiful.  The cherry blossoms start to bud and within a week of budding they are blooming.  Shortly after that, the spring winds blow the petals away leaving nothing but the nearly bare branches exposed for a short time before the leaves replace them.  It’s a very short process that takes only a few weeks.  If you are lucky, the cherry blossoms are in full bloom for almost two weeks, but for most of the time it is around one week.  This year the symbolism of mortality has been especially poignant this year due to the Great East Japan Earthquake (Tohoku Earthquake).  With over 10,000 people found dead at the start of Tokyo’s cherry blossom season, many people were still unable to get past the sadness that the country has endured for what was less than a month.  The region was also dealing with the ongoing nuclear crisis and wondering what would arise from such problems in the future.  Needless to say the atmosphere in Tokyo was far from celebratory. 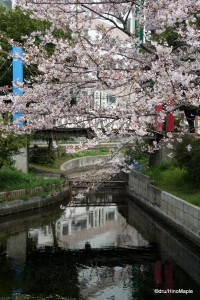 Sakura in the park

I mentioned two years ago that there was a fairy tale that highlighted the fact that many dead bodies were buried under the cherry trees and that their souls were linked to the trees themselves.  Since then, I have heard a few more stories that included the “fact” that the ashes of the dead were scattered around the base of the cherry trees as well.  The symbolism of this act was that the people who died would be reincarnated as petals within the tree itself.  This is also more so for those who had committed suicide or sacrificed themselves for their country such as those who died or committed suicide for Japan in war.  I still cannot find any information regarding this in any online source however this has been relayed to me by various students.  This is of course changing from person to person but the basics are all the same.  This also creates a tale for children that the trees themselves are haunted.  This is to keep the children away from the trees, especially at night.  Some stories include the fact that if you go to see the cherry trees alone at night, you will die.  I would theorize, as with many other tales, that this was to prevent children from going to see the cherry blossoms alone at night when it could be dangerous.  It is also another reason for many cities to illuminate the blossoms at night in order to “protect” people from being “killed” or “taken away”. 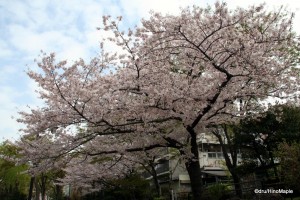 This year in Tokyo was very different indeed.  While I didn’t personally go to any parks to witness the cherry blossom parties, I did have a chance to walk around; see pictures from friends; and hear first hand accounts from my students and friends.  The hanami season (cherry blossom viewing/cherry blossom party) was definitely different.  There were less people and less noise.  Most of the famous parks were quieter than normal.  Most companies had cancelled their parties and most parties were of friends and families only.  The Governor of Tokyo, Mr. Ishihara, called on everyone to refrain from having hanami parties and to respect the dead in the difficult times.  There were many opinions about this action and I will refrain from voicing mine as much as possible.  This basically caused a lot of companies to cancel their plans, if they had any, and most of the parks that lit up the trees at night were dark.  Several parks had signs that requested people to avoid having parties under the cherry blossoms and the few parties that I did see were very quiet affairs.  Rather than the raucous parties where people drink excessively, I would imagine that people just enjoyed a few drinks and enjoyed the chatting more.  Of course I wasn’t there so I can’t truly comment on the outcome.  It could well be that there were some groups that were pretty loud but I can’t say for sure.

Unfortunately, the parks were not as busy as a regular year.  This could also be a blessing for some however it was still busy.  Unlike most years where you would be hard pressed to find a good spot to enjoy the cherry blossoms, this year you could find spaces without looking too hard.  The party mood was definitely more sombre than normal however it will be an anomaly.  I’m sure that by next year the parties will return and the drunken mess will be back.  Tokyo will be its regular happy and raucous self.