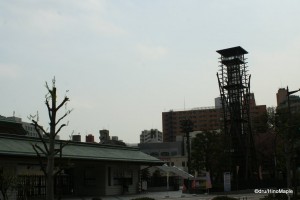 Ryogoku is part of the Shitamachi area of Tokyo.  The Shitamachi area can simply be thought of as the eastern area of Tokyo if you draw a line, north south, from the centre of the Imperial Palace.  It has often been referred to as the old area of town and where you can meet many new characters.  In the past it has been populated by the lower class of merchants and to this very day the entire area has a friendlier and more forward style of life compared to the west which tends to be more high-brow.  Ryogoku can now be considered part of the Shitamachi sould for many reasons.  While the old centre was in Ueno, the heart appears to be in Asakusa, the body in the surrounding suburbs, and its soul lies in Ryogoku.  Ryogoku has one major claim to fame and it has to be the Ryogoku Kokugikan. 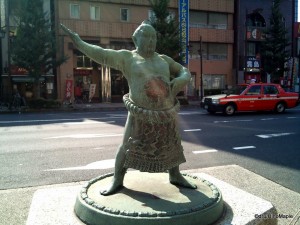 The Ryogoku Kokugikan is located on the north side of Ryogoku Station.  It is the main arena for all sumo tournaments in Tokyo.  There are 3 tournaments a year in Tokyo, January, May, and September.  Visiting Ryogoku during any of these months is a wonderful experience whereas visiting on other months will be special, but not as interesting.  During the tournament month the entire front fence of the stadium is adorned with tall colourful banners for each of the Sumo stables.  Each stable has its own banner and they proudly display it during the tournaments.  During the tournaments, it’s not uncommon to see hundreds of people, if not thousands, lining up outside and around the stadium.  The people who are lining up are generally trying to get tickets, enter the stadium, or just get pictures of the sumo wrestlers as they enter or leave for the tournament.  Within a year of living in the area I have seen many sumo wrestlers at the stadium.  If you happen to be in the area in the afternoon, you have an even greater chance of seeing them at the train station, but don’t expect to see the top Ozeki and Yokozuna.  They tend to get their own cars or have others who drive them.  Sumo is a very old and respected sport in Japan, and part of that tradition dictates that they must live in the old traditional styles of Japan.  This includes their clothing as well as their ability to drive.  Most sumo are not allowed to drive as this goes against the tradition.  There are instances where they do not wear their traditional clothing, but this is not very often and they have specific reasons for this. 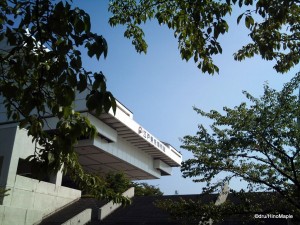 While Ryogoku is defined best by the Ryogoku Kokugikan, it isn’t the only important thing in the area.  Next door is the Edo-Tokyo Museum.  Edo is the old name for Tokyo and the museum itself is a look into the past of Tokyo.  It is located in a very unique building.  It was designed to look similar to an old style store house but the best way to describe it is to imagine a roof structure on 4 pillars.  The museum is located inside the roof structure and there is a large open area around the pillars.  It’s best to be seen with pictures in order to understand it.  The museum itself can be centred on one floor located in the “roof”.  While there are special exhibits on the main floor, most tourists will want to visit the Edo museum upstairs.  This is a very interesting museum.  There is a full scale replica of the original Nihonbashi bridge, albeit cut off due to space restrictions.  They detailed it perfectly.  The entire area is primarily lined with miniature models.  Everywhere you go you can see miniature models of what Tokyo looked like during the Edo era.  While most of the descriptions are in Japanese, the intricate detail of each model is amazing.  Unfortunately, photos are very difficult to take inside due to the lighting.  They utilize a very dark mood which makes most photos without a tripod nearly impossible.  The main floor adds a bunch of life sized replicas of the way of life in Tokyo.  They include the pre-war and post-war eras.  It’s amazing to see some of the artifacts in the museum from old bicycles to bombs and even a replica of a house built after the war.  The admission is worth it for those who want a little culture, but if you aren’t interested in culture, you might want to skip this museum. 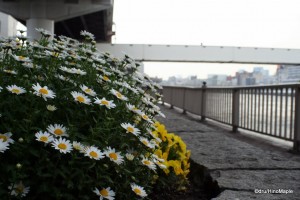 Heading east of the station, along the train tracks, will take you to a large wall.  This is actually a dike built by Tokyo to keep the flood waters of the Sumida River out of the city.  It’s fairly easy to climb this wall and get to the riverside.  The riverside called the “Sumida River Terrace”.  This is a long promenade that stretches for kilometres in each direction.  The section around Ryogoku stretches from a point several hundred metres to the south and about a kilometre to the north.  I will detail as much as possible in a future post, but the area immediately around Ryogoku is worth mentioning here.  If you start at the train tracks themselves, you will be greeted by two things, the Sumida River Art Gallery, and the water bus terminal.  There is a small port used on weekends and holidays for river tours, but due to the relative lack of tourists in Ryogoku, I rarely see the ferries stop in Ryogoku on days other than weekends.  The Art Gallery is a public art gallery that showcases various pieces of art done by people of all ages.  It’s interesting to see some of the pictures the school kids in the area have drawn as well as some of the old pictures of the region.  The information on the pictures are difficult to understand as it can be a little sparse or completely in Japanese.   Most of the art is located on the dike wall but that is not the only place to look for art.  On the floor itself you can see pictures of sumo wrestlers and on the railing before you fall into the river are various metal depictions of sumo moves.  These are all very interesting and extremely informative.  Spending a lot of time to enjoy these depictions and to learn the typical moves in sumo is enlightening.  It is something that you cannot experience at the Ryogoku Kokugikan as the Kokugikan is used for show rather than education.  There may be information on this inside the Kokugikan, but I haven’t been inside so I can’t comment on this. 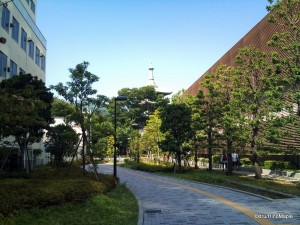 There are still many other things to see and do in Ryogoku.  You can take a small tour of the area and see small shrines and parks.  Unfortunately, they aren’t as significant as many of the other parks and temples in other areas so they tend to be skipped.  The good point is that when you enter, there won’t be many people so you can enjoy the park as if you were the only one there.  I highly recommend spending a few hours just touring the area, especially to the north.  You can also try some chanko nabe.  It’s a type of hot pot where they boil a bunch of food together.  It’s a traditional sumo dish and being Ryogoku, many past sumo wrestlers have started their own shops.  It’s very easy to find a shop everywhere.  The charm of Ryogoku comes from being part of Shitamachi and the prestige of the sumo.  It can make any visit extremely memorable.