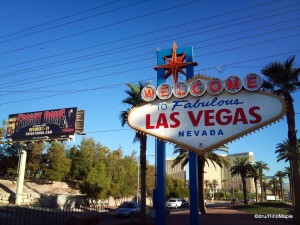 Sin City, Vegas, Disneyland for adults, these are all names and slogans that I have heard for Las Vegas before I ventured there this year.  I had a short vacation to visit Las Vegas for 3 nights in October.  For most tourists, Las Vegas consists of just the strip, with little side adventures on the side.  It’s a city that really never sleeps, and it’s a place where your senses will be overloaded.  My flight into Vegas was at night and I landed around 11pm.  It was a nice flight and I flew over the strip on the way in, providing me with a good view of the strip, albeit from an aisle seat.  My expectations of Las Vegas was a city that never sleeps, has lots of entertainment, and a place that will suck up all of my money as fast as possible.  It didn’t disappoint. 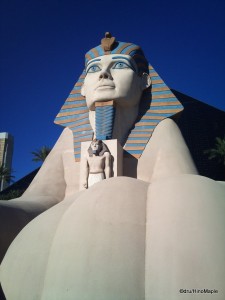 I didn’t get a chance to see all of Las Vegas as it was my first time, and I didn’t bother to rent a car.  I stayed at the Luxor hotel.  It’s a hotel that is connected to the Excalibur and Mandalay Bay, and part of the MGM group.  The Luxor is the hotel that is in the shape of a big black pyramid with a light on top.  The theme is Egyptian, and overall, I’d say it’s a small hotel.  The Mandalay Bay is a bigger and classier, while I found the Excalibur to be kitschy with its medieval theme.  When gambling, I found the Excalibur to be better as they had some cheap tables that I preferred, and the Luxor was good as the casino area was small, making it easy to find tables I liked.  Unlike some of the bigger casinos, the atmosphere was very different.  The service in the Luxor was good overall, but I was disappointed to see that many regular shops closed at night, and only the bars and clubs were open.  I wanted to be able to get a nice meal late at night, but I was surprised to see so many places closed around 10:30pm.  Like most hotels, the Luxor has its fair share of shows, but I won’t go into detail here. 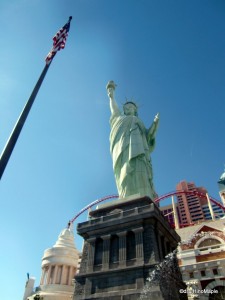 The location of the Luxor, unfortunately, wasn’t good.  It was a great point for me to walk over to the “Welcome to Las Vegas” sign, which was a good kilometre of so.  It is located across from the airport and all of the big hotels are located in the centre of the strip, about 30 minutes north of the Luxor, on foot.  The good thing was that being in the southern end of the strip it wasn’t too busy, unlike the portion between New York New York and the Bellagio.  If I had to choose another hotel next time, I’d probably stay somewhere more central so that I didn’t have to walk too much.  Walking is a great way to see the strip, but I can’t imagine doing it in the middle of summer where I hear temperatures reach 40C.  I would definitely recommend getting some lip balm as you are in the desert.  I had a tough time keeping hydrated and I damaged my lips pretty bad.  The walking didn’t help either. 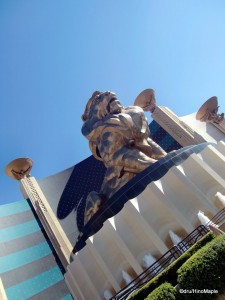 One of the bigger annoyances on the strip was the peddlers.  In the day, you will see a bunch of people just standing with big chests of ice and water.  It’s essential and I’m sure they get a lot of money selling water between the hotels.  Their prices are very reasonable when comparing it to the hotel prices.  The other is the stripper peddlers.  Up and down the strip, particularly between the MGM Grand and Planet Hollywood, there are dozens of people trying to give you small cards with phone numbers and pictures of strippers.  If you are looking for that sort of thing, that’s fine, but if you aren’t, it can be a big annoyance as they never give up.  The constant flicking of the cards to get your attention is mind numbing. 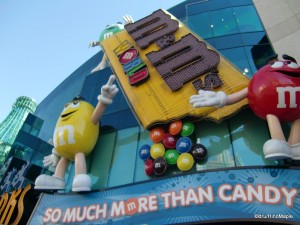 If you plan to watch some shows, there are plenty of places to visit.  I’d recommend visiting Tix4Less, which has many shop locations along the strip.  I ended up paying for VIP service as I didn’t want to wait an hour for discount tickets and it was well worth it.  You don’t have to buy tickets in advance, and you don’t have to buy tickets at the box office either.  Often, you can get shows at a discount, at least $20 off, and up to 50%.  Some shows do sell out, so it’s best to be there early, say 9am when they open.  If you go there that early, you probably don’t even have to line up.  Just buy your vouchers at the discount shop and convert them into real tickets at the box office.  It takes a bit of time to do things that way, but the savings can be worth it. 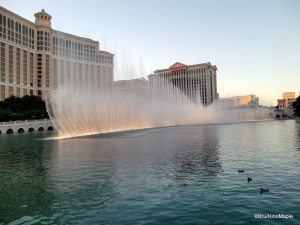 One of the main things to enjoy on the strip is to visit the Bellagio hotel and watch the water show.  It was made famous by Ocean’s 11, and it’s still a very popular show.  When watching the show on Ocean’s 11, you can’t fully appreciate the power of the show itself.  The noise of the jets and the sound of music is amazing.  I would recommend watching it, especially on your first visit.  I also recommend heading into the Wynn as it was one of the most elegant hotels I visited on the strip.  Many, such as Paris/Bally’s were old and the theme was interesting, but depending on what you want to see and do, sometimes that’s not a good thing. 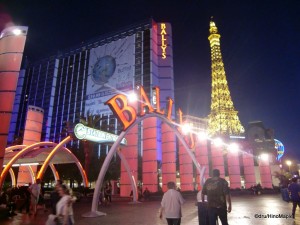 For those going to Las Vegas, you have to plan a little on what you want to do and what you want to see.  A few days are generally more than enough when you are there. I’d suggest wearing good shoes and prepare to party.  Going with the right group will make a huge difference.  A fat wallet also helps.  I highly recommend trying to stay somewhere between New York New York and the Wynn as everything else tends to be a bit far.  After a few days, I started to get sick of Las Vegas and needed to find a place to hide out.  It’s difficult to find a quiet sanctuary along the strip, and I’m sure that if you are out in the suburbs, it’s very different.  Even though I’m living in Tokyo, the strip is very different.  It’s closer to being in Shinjuku’s Kabukicho all the time, but without the “danger”.  There is such a thing as too much.  I’d love to visit Vegas again someday, but it definitely won’t be anytime soon.  Living in Tokyo, Vegas is too far to visit easily, and it’s too busy.  When travelling, I have come to enjoy getting out of the city and into the countryside.  Isolated areas where few people go are more interesting for me.  Maybe you’ll see that more often in my near future travels.