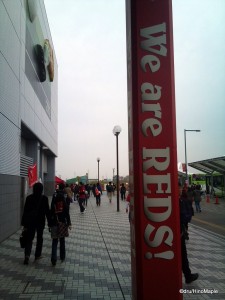 On November 14, I had the pleasure of being able to watch another football game in Japan. It was only my fourth time to ever watch live football in Japan, and as with my other experiences, this didn’t disappoint. In my previous visits, I had been to Ajinomoto Stadium in Chofu, west of Tokyo. This time, I decided to north to Saitama to watch one of Japan’s biggest teams, the Urawa Reds. The Urawa Reds are one of the most popular teams in Japan, and their following is huge. Those who were born in Saitama are supposed to love the team. Those living in Tokyo and even Chiba like the team. Their fans always make the journey to watch their team play no matter where they play. The supporters are very vocal and it can be deafening to just be in the stadium as the team is playing. This was all at Ajinomoto Stadium, so you can imagine what it might be like at Saitama Stadium, the home of the Urawa Reds. 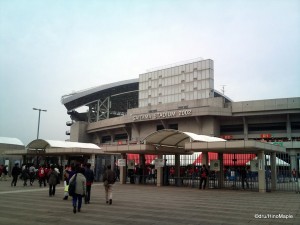 Getting to Saitama Stadium is very easy. Within Tokyo, taking the Toei Metro’s Namboku Line, you are directly connected to the Saitama Railway which terminates at Urawa Misono Station. This is the closest station to Saitama Stadium. It’s also a 20 minute walk from the station to the stadium. The first thing you will notice when you leave the station is that the entire area is a sea of red. No matter which way you look, you will see red everywhere. The station has various signs promoting the Urawa Reds. One of their slogans, at least for 2010, was “We are Reds”. It’s entertaining, but it isn’t the destination of the day. The signs and the walk to the stadium definitely make one excited, but unfortunately, it’s a long walk with few signs between the station area and the stadium to keep you interested. The area between the station and the stadium is nothing more than a broad walkway with a few street vendors along the way. There isn’t much to see, but if you are hungry, it’s best to buy something there. Once you reach the stadium entrance, everything becomes more expensive. 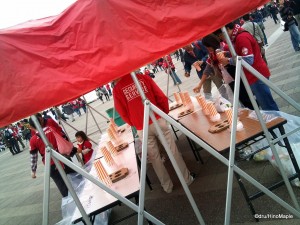 Once I got to the gate, I took a little time to enjoy the atmosphere outside. There were various street vendors selling beer and food. They even had a tent for people to transfer any liquids they had into free cups. Due to safety concerns, plastic bottles and cans are not allowed into the stadium. They do check your bag to ensure you don’t bring anything dangerous into the stadium. When I arrived, they even had a small jazz band playing music, and all of the band members were wearing Reds shirts. I doubt they could afford jerseys for a short show like that. The next thing to do was look for the merchandise. At the time I went, they had a large portable with various goods at discount prices. Due to the time in the season, they were trying to sell their 2010 merchandise before the end of the season so many things were 40-50% off. If you time your visit right, you can get some good things. 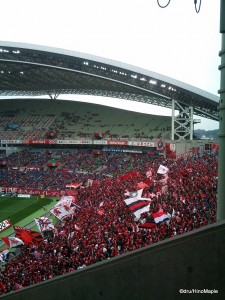 After that, I finally decided to head in. The game was a Sunday afternoon game, and they were playing Kyoto Sanga, one of the lowest ranked teams in J1. Kyoto Sanga was facing relegation into the J2 league as they were in the bottom 3. It was a must win for Kyoto. The entire stadium was obviously painted red with everyone wearing red jerseys. Even in the upper deck, it was hard to find someone who wasn’t wearing red. For the day, the only colour that was not allowed was purple, the colour of Kyoto. In fact, because it was Saitama Stadium, the supporter’s section was extremely small. They took up just one section of the entire stadium. If it was a bigger team, such as FC Tokyo, or Gamba Osaka, they would get at least 2, maybe 3, but not much more. The last game I saw was in Ajinomoto Stadium, and the reds took up the entire section behind the net, and even a little more towards the sides. It was almost impossible to see the Kyoto supporters in Saitama Stadium, but they were there, and they did their best to support their team. 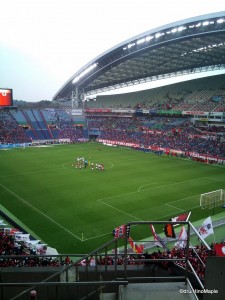 Kyoto Sanga Supporters (In the distance)

The game itself was relatively predictable. With the mid ranked Urawa Reds playing the low ranked Kyoto Sanga, one could almost predict the outcome of this game before it even started. From the kick off, the Reds controlled the ball and kept it moving. They had more chances to score, but Kyoto kept capitalizing on turnovers for short chances. It was a tug of war between the two teams, and while the Reds were winning on the field they just couldn’t get the ball in the goal. At the 25 minute mark, the Reds finally converted and scored their first goal. Needless to say, the entire crowd jumped to their feet shouting in joy. I could barely hear the crowd as I was screaming way too loud to hear anything else. In fact, I screamed so loud, I almost lost my voice! High fives were exchanged between me and my friends, and I even got those around us, pretty much only behind us as those in front didn’t turn around, to also give high fives. Everyone was happy, but the game was far from over. By the second half, the game seemed to have changed. Urawa wasn’t playing as hard as before, and the opportunities didn’t materialize as much as it should have. For the team, they seemed to have stopped trying to score, and played for a 0-1 win. It was a tense second half, and by the end of regulation time, it was announced that they were adding 5 minutes of extra time. For a game that had minimal stoppage, 5 minutes was extremely strange. I thought that 2 minutes would be the most, but 5 minutes was unimaginable. I was talking to my friend about how the refs probably wanted to give Kyoto a chance to tie, but just as I was saying that, the Reds scored for a second time leading to a second round of cheers. By the time everyone had settled down to continue watching the game, the refs blew their whistles and the game was over. 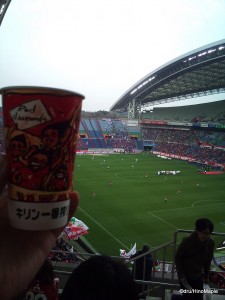 While the game was over, the crowd wasn’t ready to go home yet. In the upper deck, a lot of people were heading out, and people were trickling out of the lower bowl. For those in the supporters section, not a soul had left. They were still singing and cheering and the action wouldn’t stop until all of the Urawa Reds players came out and saluted them. All of the players did their ceremonial salute to the stadium. As in Ajinomoto, the team came out, bowed, and raised their arms to the air as the crowd chanted in unison. It’s difficult to describe the chant, other than it was a long “oh”. You do have to visit the stadium itself to understand it.

Saitama Stadium is one of the only, if not the only, stadium in Japan that is dedicated to only football. The seats are very close to the pitch and all the seats are good. While I was in the upper deck, because I am a casual fan, it’s nearly impossible to get into the lower bowl for a reds game, unless you know someone. It was a lot of fun and I highly recommend going if you can. The only sad part was the fact that there are no beer girls in Saitama Stadium. Unlike Ajinomoto, they don’t make a lot of money on beer as everyone watches the game. Why drink when you should drink after the game. Needless to say, I had a great time and I’ll definitely go again if I get the opportunity. I’m still an FC Tokyo fan as I started out watching them. My second team will now be the Reds.

Japanese Football aka Soccer (Kyoto Sanga VS Urawa Reds) is part of a series of posts talking about the football games that I have attended.  To read more about these games and football in Japan, please follow the links below: