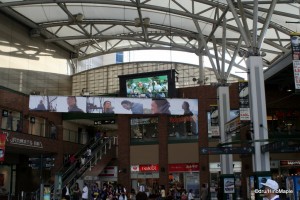 Nagasaki is a small city located in Kyushu, southern Japan.  It is often one of the most overlooked cities in Japan as it’s far from Tokyo.  It is one of the most historically important cities in Japan, but a city without the traditional culture of Kyoto, or the hustle and bustle of Tokyo.  It was one of the very few ports that allowed trade with the Europeans from the 16th to 19th centuries.  When visiting Nagasaki, you can easily see this influence in the architecture.  In the modern era, Nagasaki is more infamously known as being the second and last city to be bombed by an atomic bomb.  While the bombing in Hiroshima is well known, very few people outside Japan remember that a second bomb was dropped in Nagasaki.  When people hear this, they tend to be a bit surprised. Nagasaki is a very different city to Hiroshima.  Rather than promoting peace through education, they have decided to grow past it, and much of the city focuses on its history with the Portuguese and Dutch.  That’s not to say that they don’t still remember and commemorate the tragedy of the Nagasaki Bombing. 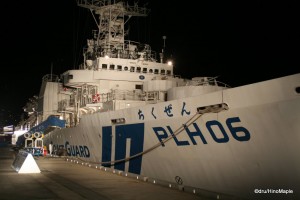 The first thing to know about Nagasaki is that it’s a hilly town.  Getting around town can be difficult as you have to climb up and down various hills.  If you are staying in the main area, there is nothing to worry about.  You can easily walk from Nagasaki Station to wherever you need to go, without taking the tram or a bus.  However, if you are carrying bags, it’s a good idea to take public transportation.  The station area is a very busy area that is full of cars and people.  It’s the centre transfer point as the final stop for the JR lines is Nagasaki Station.  You must transfer to one of the many buses, or the trams to get anywhere else within the downtown core.  Walking south along the harbour will take you to Dejima Wharf, and a nice park.  This area is a great place to relax during the day.  There are a few large shopping malls between the park and the station, but once you cross into Dejima Wharf, you suddenly enter a different world. Dejima Wharf is like any typical tourist wharf area.  There are boats and lots of bars and restaurants.  It’s probably one of the nicest places I’ve seen and I’d love to go back and enjoy a day just drinking on the wharf.  Just past the wharf is a nice large park that is on reclaimed land.  It’s where the Japanese Coast Guard moor their various ships and also for summer festivals.  When I went in July 2010, they had a big summer long festival where you can get all of the local foods, get free entertainment, and enjoy fireworks from time to time.  It was a bustling place with thousands of people enjoying themselves. 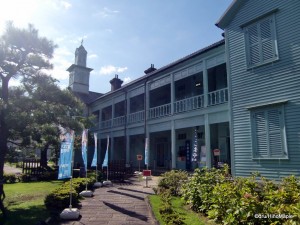 Next to the park and wharf is Dejima itself.  Dejima was a colony/prison island for Europeans.  When the Portuguese and Dutch did their trading during the isolation period in Japan, they were limited to this island.  Today, you’d be hard pressed to tell that it was an actual island.  The river that isolated the island is only several metres wide, and it doesn’t look that deep or dangerous.  The waters were very calm and no dangerous animals in sight.  In fact, as Nagasaki grew over the years, so did the land area.  Dejima used to be an island that was surrounded by Nagasaki Bay, but they have since reclaimed the land and the entire area is surrounded by land.  The most interesting aspect of this area is that they still had some old warehouses and churches in the area.  If you are walking along the river, you can see the old buildings.  The entire Dejima area is now a museum and you can enter the museum itself, but you must pay an entry fee.  Inside, you will be able to see some scale models of the island from the old days, and you might see some artefacts of the island as well.  Personally, I didn’t bother to enter, but if I return again, I will. 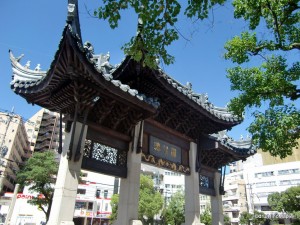 Nagasaki is well known for its Chinatown.  There are three famous Chinatowns in Japan, Yokohama, Kobe, and Nagasaki.  The Chinatown in Nagasaki is probably the smallest of the three, and it wasn’t very special.  It’s a nice place and easily visited within 10 minutes.  There are the typical Chinese red gates throughout the area, but at night, they have special lights at the top of the gates within Chinatown with various pictures of dragons and tigers.  The entire area felt like a typical Chinatown tourist trap.  Various Chinese restaurants and some medicine shops were the main attraction.  For those who aren’t into visiting Chinatown, if you head a little further north, you’ll run into the shopping area of Nagasaki. 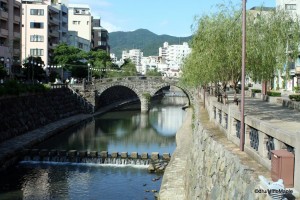 The shopping area of Nagasaki is a nice place to relax during the day.  At night, it’s busy and difficult to get around.  I’d suggest avoiding it after 4pm if you are looking to have a relaxing trip.  If you continue north along the shopping arcade, rather than east-west, you will come to a nice small quiet street where you can see various small shops selling crafts.   The character alone is worth a short visit as you never know what treasure you will find there.  Heading in this direction will also lead to Meganebashi, or Spectacles Bridge.  It’s supposedly the oldest stone bridge in Japan, and the water is so clean that on a sunny day, the reflection in the water with the arches makes the bridge look like a pair of spectacles.  The area itself is very clean and you can view the bridge from two areas, one that is level to the bridge deck itself, and the other is from the river.  It’s a nice place to visit, but in reality, nothing special.  If you do have the time, please go and visit the landmark, but if you don’t have the time, don’t worry about missing it.   It’s not a must see in Nagasaki.

This is Part I of a two part series on Nagasaki.  Please continue reading Part II.