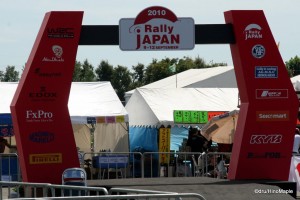 September 2010 marked my third trip up to Hokkaido and my first ever trip to a World Rally Championship (WRC) race. It was the first time in two years that the championship held an event in Japan, and as with tradition, the race was held in Hokkaido, Japan’s northern island. I had no idea on what to expect and just went for the fun and the chance to be up close to some of the drivers and co-drivers. I was extremely surprised by how much I enjoyed the event. The event itself is staged over 4 days (Thursday to Sunday) with Thursday being a ceremonial start and super special, and Sunday being only half a day. As with most race events in Japan, there were the plethora of die hard fans in the area, but there were also a few of the casual fans as well. 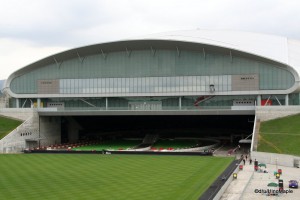 If you have read my previous blog posts, I have been to both F1 and Moto GP races in Japan. WRC is a very different type of event. Whereas F1 and Moto GP consist of 3 days, the first day is for the die hard fans only, and for those looking to do some shopping. The second day is for the big fans to enjoy qualifying and of course, do more shopping. The Sunday is the day that all the action happens. For the WRC, everyday is an event. Racing started on Thursday with two special stages inside Sapporo Dome. Sapporo Dome is a large futuristic looking dome that is home to the Sapporo Consolade FC and the Nippon Ham Fighters (Baseball). The inside was set to the baseball configuration. When the time comes to convert to a football field, the football field is actually rolled into the stadium, rotated, and the seats adjusted to fit. For the WRC, they just removed the baseball field, opened the bay doors, and did most of the racing inside, with just a little outside. They held two stages within the dome itself on each day, for a total of 8 stages. On the other days, aside from Sunday, they also held service at the service park. Think of it as a pit lane for the cars, but with much more time. 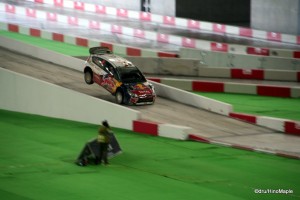 To go any further without explaining WRC would be pointless. WRC, in its standard form, consists of 3 days of racing. Each day is split up into several stages. Each stage is a run on closed roads where the drivers are allowed to go as fast as possible. Once they finish the stage, they have to drive themselves to the next stage. At certain points of the day, they return to the service park, which is effectively a temporary garage. The cars drive in and the clock ticks down. They are given an allotted amount of time to fix the cars so that they are ready for the next set of stages. By the end of Sunday, they are quickly serviced and scrutineered. This is a basic rally. When I went to the rally, I went for two days. Rather than actually going to the rally itself on the first day in Hokkaido, I went to a small park that overlooks Sapporo Dome. I did get a chance to tour the outside of Sapporo Dome and enjoy the sights. If you do go to Sapporo for the rally, you don’t technically need a ticket to see the drivers, nor do you need a ticket watch the actual race. If you want to guarantee that you can see the drivers and the race from a good seat, you will have to pay for tickets. 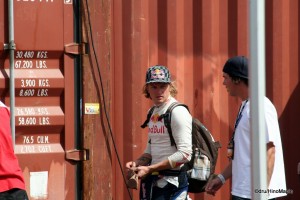 The service park is where most people will want to go. While the Sapporo Dome stages are great, the majority of the fans will be at the service park waiting patiently for the drivers to enter. Depending on who is there, and at what time, you will have a good chance to get an autograph from your favourite driver. When I arrived on Sunday morning, I was surprised to see a car at the service park. It was Kimi Raikkonen. He unfortunately spun his car after misunderstanding a pace note read to him by his co-driver and beached it on the side. He couldn’t continue on his own, so he had to retire. When I arrived, he was still giving a small debrief to the crew and the crew had just started preparations to pack the car up and bring it back to Europe. For the die hard fans, they could just sit and watch him for hours as he relaxed and had a drink. It’s interesting to watch them relax as they really do look like a normal person. In fact, he reminded me of me when I was doing a track day in Vancouver several years ago. 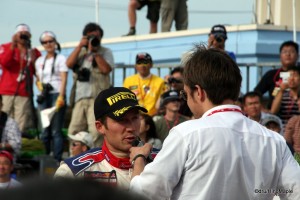 The WRC, as I said, is very different to other motorsports. It’s a family sport, rather than an elitist sport. All of the drivers and co-drivers are friends, of course to different levels, and they are all very close to each other. In MotoGP, things are similar as the MotoGP riders are the father figures to the lower classes. In WRC, due to the small numbers of drivers and co-drivers, it’s easier for them to talk to each other, and it’s possible for them to bond. This is one of the main reasons the press says Kimi Raikkonen is happier in WRC and probably won’t be going back to F1 unless the money is truly that good. At the end of the rally, all of the drivers must drive through the ceremonial start/finish gate. Without doing so, they technically don’t finish the rally and would be listed as a DNF. For fans, this is a great opportunity to get up close. In F1, you are lucky to be close enough to see their faces as you are generally located across the track when they do the podium ceremony. In MotoGP, due to the crowds, they have to keep you 10 metres away, and the riders are a couple meters up on a platform. In WRC, you are no more than 5 metres away, at level, and the drivers can come really close to you. I was literally only 1 metre away from the drivers after the podium ceremony. 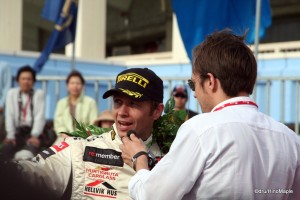 My most memorable experience is the fact that Petter Solberg finished second. He is one of the most recognizable faces in the WRC, at least to fans, and one of the most personable ones too. During the podium ceremony, he was the first to run at the crowd and throw some champagne on them. The other drivers and co-drivers soon followed suit and my side of the podium was getting into the champagne fight as well. I got a good amount of champagne dumped on me by Julien Ingrassia, the co-driver to Sebastien Ogier, the winner of the 2010 Rally Japan. After champagne is dumped on you, or sprayed if you are a driver, it’s not a great feeling. It is fun to do, but you feel very sticky afterwards. Thankfully, I didn’t get the full brunt of a shower as there wasn’t enough champagne to spray everyone. However, I did smell of champagne for the rest of the day. Afterwards, I hung out at the service park for about an hour. I quickly headed over to the Petter Solberg World Rally Team (PSWRT). Within minutes, Petter Solberg arrived and started signing autographs. I stayed my place and sure enough, he headed over. I was busy taking pictures, but my girlfriend was lucky enough to push her way forward to the fence. Needless to say, we got our program signed and it was a very happy moment for us. I came within feet of what I consider a great rally driver, and one of my motor sport heroes. I quickly got out of the mob as I felt I had enough and wanted to let others get a chance to get an autograph as well. I’d swear that Petter stayed for 20 minutes trying to sign as many things as possible. If you are a true fan, you’d be camped out in front of their tents waiting for them to arrive. If you do that, you’ll more than likely get an autograph or two. 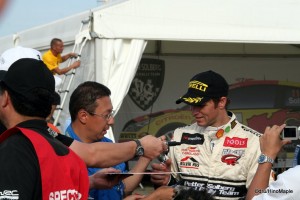 In general, the WRC is an experience that I’ll always remember. It’s not for everyone, but if you do enjoy rally racing, you MUST go. If you are just an average race fan, it may not be so interesting, but it’s worth the trip. While the Rally Japan will not be the same as going to the French Rally, or anywhere else, it’s still something to see and do.