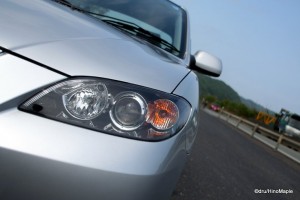 For those of you who have been reading this blog for a while now, you know that I have had many trips in and around Japan, along with many road trips.  I have been taking road trips almost every year now on either a motorcycle or in a car.  In 2007, I took a trip to Hokkaido by motorcycle.  It was my first road trip, and a terrible one at that.  I was alone, cold and wet.  For my second trip, I rented a car for just a day and drove up to Nikko.  The route brought back a few memories of my trip to Sapporo, but with all the comforts of a car.  It was a pretty easy trip, but it taught me the pain of driving in the city, and trying to return to the city on a Sunday night.  One word can sum up that experience, traffic.  Last year, I had my epic adventure, and the last one on my bike.  I took a trip by ferry and rode my bike around Shikoku for two weeks.  It was a wonderful holiday that restored my faith in driving and riding in Japan.  It helped a lot that I went with a friend from Osaka.  Recently, June 2010, I embarked on my big road adventure of the year.  I headed to the San’in region, along with Hiroshima.  What follows is a recounting of what happened as we conquered the roads that lay ahead of us. 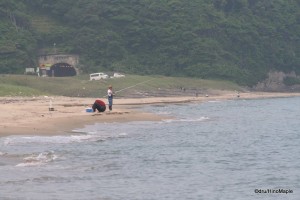 As many of you know by now, I have written about my adventures in San’in already.  I have talked about Tottori and Shimane.  My journey started with a flight from Tokyo to Tottori.  I left in the early morning and had time to spend an entire day in Tottori city.  I visited the Tottori Sand Dunes and that was pretty much it.  The actual adventure didn’t start until the next day.  We got up early again as we had a long day of driving ahead of us.  Thankfully, we had two drivers, one being myself, and the other being my friend from Osaka.  We rented a Mazda Axela, which is a Mazda 3 in North America.  It was a little big for what we needed, but we were expecting a total of 4 people in the car, but one person bailed as she booked the wrong tickets for the trip.  The car itself was big for what we needed.  We could have gotten a compact car instead of this one, but the added size made the trip very comfortable.  When we got the car we spent a few minutes fiddling with the GPS navigation system before we took off.  The GPS was easy for us to understand, but it would take at least 2 more days before it was easy to use.  If you ever rent a car in Japan, be sure to learn a little Japanese, or have a good understanding on how to guess the menu system.  It was difficult to use, but we all had various degrees of Japanese knowledge which helped us a lot. 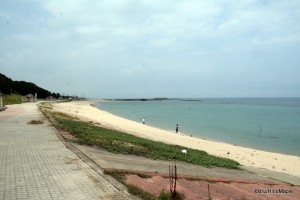 Our first leg of day 1 was a trip along the coast.  We started with a short drive on the mainland to avoid the traffic and made good time.  We reached our junction, ignoring our GPS all the time.  We had our own route planned and the GPS was guiding us to the “best” route but not the most scenic.  Thankfully, we had enough knowledge of the road to navigate smoothly and soon enough we were pros at navigating.  When we hit the coast, we took our sweet time and stopped at a couple beaches. We got our feet wet and took many pictures.  It was a perfect start to the day.  Driving up and down the coast on the Sea of  Japan is amazing. I have heard from many motorcycle riders that the coast is amazing, and I would have to agree.  I would love to just rent a car, or even bring a bicycle to the area and just enjoy the trip.  I was told by a friend that taking the train is also spectacular, but I tend to get a little antsy on trains after a few hours.  At least with a train, I could drink alcohol and not worry about getting into too much trouble. 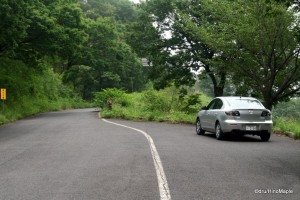 My friend from Osaka did the first leg of driving.  He handled the coast very well, which was pretty easy.  There weren’t too many turns and the signs were easy for us to read.  We had one tough section through a small town called Hawai.  The pronunciation is the same as Hawaii, and the town played with that name a lot.  Everywhere you went, you saw Hawaii signs and tourist attractions that were a little tongue in cheek with references to the beautiful island resort.  After the town, we switched drivers as my friend had bad experiences driving on small country side roads.  It was my first time to drive in a few months and over a year since I had last driven on the left side of the road.  It was a little shaky at first, but I got my road legs back very quickly.  Aside from getting used to the car, which happens with almost any new car I drive, things were easy.  We were quickly headed down the road that we chose, but we soon reached what looked like nothing more than an access road.  Being in the countryside of Tottori, some of the main highways between cities are more akin to an access road rather than a true road.  Unlike North American streets where designated highways must meet a certain criteria, in Japan, it just indicates the road.  Our first “moment” came as this access road was about 1.5 lanes wide and we came across a truck.  It was a big truck and a challenge.  I was facing the challenge of passing this oncoming truck with only a few centimetres on both sides of the car.  The truck driver was kind enough to stop on the side and let me do all the work, but considering his side had a wall, and mine a drop into a field, it wasn’t that bad.  Creeping slowly, I passed my first hurdle.  Little did I know, this would only be the beginning of our journey of the day. 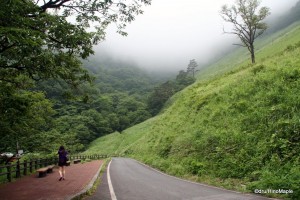 The route we took to Daisen, our first real destination, was simple enough and only a few points of caution.  My map had a few warnings that the road we were about to embark upon was closed during the winter months due to the weather.  This didn’t worry me too much.  We had a nice car, supplies to keep us fed and hydrated, and lots of time.  By the time we reached the road, things changed very quickly.  The first challenge of a small countryside road was past, but we had another road that was also only 1.5 lanes wide.  Being the countryside, and having seen the last stretch of road, I thought that this would be a short stretch of narrow roads.  I was wrong.  We also had to contend with a few construction signs with which we had no idea what they meant.  After our trip, we reviewed photos of the signs, and the sign said that cars were not allowed in, but when we went, it had a sticker on top saying it was “cancelled”.  Essentially, we got lucky.  We ended up doing most of the trip up and around Daisen on the narrow style road.  I have had experience on these types of roads before in Canada.  In Victoria, there are a few nice places like this.  The road is narrow and the vegetation is abundant.  On this road, it was the same.  The overgrowth from the bushes and trees made it a challenge to drive.  Being a kinder driver, I took a little more time to get around, along with the fact that I was worried about oncoming traffic, whatever it may be.  We spent roughly an hour or so going up, down, and around the north side of the mountain in what was one of my toughest drives ever.  The road was immaculate, and the beauty of the forest was unrivalled.  If I had the chance to skip that area, I would probably say no.  It’s something that has to be seen and experienced.  Before long, we were at Daisen-ji and taking a long deserved break from the car.

Note:  This is part one of a two part series.  Please continue reading about this adventure in Driving in Japan (2010) [Part II].
For further reading about the San’in region, please follow the links below:

About Touring in Japan (English): http://www.e-wadachi.com/howto/map_e.html

How to Cycle Around Japan (This is for cycling, but it’s very useful for driving as well): http://www.e-wadachi.com/howto_e.html