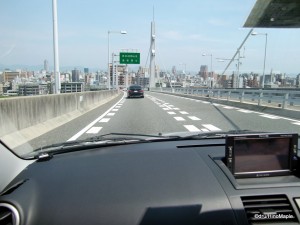 Almost 2 years ago, I wrote my first blog post on Hiroshinma and Miyajima.  I wrote about my 2007 trip to Hiroshima.  Recently, I had the chance to go back after nearly 3 years away from Hiroshima.  Each time I have visited Hiroshima, I have seen it through different eyes.  On my first trip, it was my first year in Japan, and I didn’t speak much Japanese.  I was with a friend of mine who didn’t speak any Japanese and we had a hotel room that wasn’t in the best location to do anything in the city.  It was a good location as it was close to Hiroshima Station, but far from the night life.  On my second trip, I stayed in the same hotel, but I was with my girlfriend, so the experience was also unique.  Travelling with different people to the same place will inevitably give a different impression on you.  This time, I travelled with an old friend from Vancouver who is living in Osaka, and a friend I work with in Tokyo.  This was our last stop on a great adventure that started in Tottori and ended in Hiroshima. 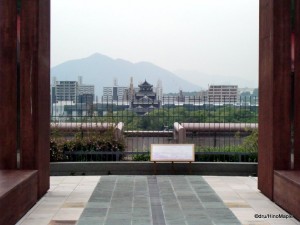 On this trip, we drove into Hiroshima rather than taking the train.  We were coming from Izumo and spent the morning and early afternoon driving.  The approach into Hiroshima from the north-west was amazing.  We drove through a tunnel that basically cut through a mountain and under a park.  The exit into the city shot us out of the tunnel and directly onto a bridge that took us over a river and into the heart of the city next to Hiroshima Castle.  We headed straight to the station to get some tickets, which we failed at, and then on to the hotel.  If there is anything I hate more, it’s driving in major Japanese cities, especially around the station.  It’s a big mess of intersections that leave you wondering how to get from A to B without killing yourself.  We thankfully arrived at our hotel safely.  Our hotel was located on the edge of the Hiroshima Peace Park, which made for a great staging area for our adventures in the city itself. 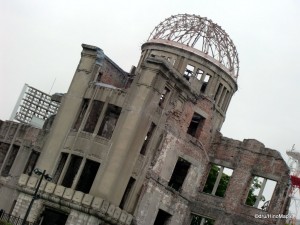 The city hasn’t changed much, if at all.  It is the same city that I remember when I first visited.  Things look familiar, and staying in a newer area meant that I could get familiar with the surrounding area a lot more.  Hiroshima Peace Park is still a must see for a first time visitor.  The need to educate oneself on the horrors of an atomic bomb in an urban area is something that must be seen and experienced.  I’m not sure how other tourists feel, but I am always humbled to the point of near depression when I visit the park.  The symbols you see are all of peace and destruction.  You will see objects of twisted metal, earthen mounds to symbolize death, and various objects to symbolize the hope for peace.  I didn’t go to the peace museum again as it was something that I would not enjoy.  It’s something that should be done once in your life, but that’s all I can handle. 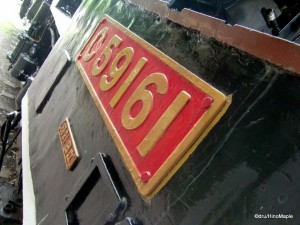 On this trip, I had a chance to walk around two new areas.  The first is around Former Hiroshima Municipal Stadium and along the river towards Hiroshima Castle.  The stadium itself is not an important place to be anymore as the Hiroshima carp have moved out to be closer to Hiroshima Station.  The stadium is now closed, and I don’t know what they’ll do with it in the future.  The area behind the stadium, near the library is an old train called C59161 or C59 for short.  It is an old steam locomotive that has been mothballed next to a library.  The locomotive is open to the public and you are free to climb into the cab area and take pictures.  Inside the cab, it’s a little dirty, but it’s a fun place to be.  There weren’t many people when I went, but I went on a weekday, so things may be different on a weekend.  The river behind the train is also nice. It’s good for a walk and there are several joggers in the area.  I found it to be a nice relaxing place that is away from the noisy streets near the stadium. 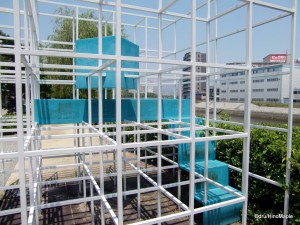 The other place that I had the joy of discovering is a river that is located near Hiroshima Station.  Heading south from the station, you will soon run into a river.  You can’t miss it as all of the trams cross over it.  Walking along this river for an hour or so is wonderful.  The banks are lined with trees here and there, and there are a few pieces of art.  I learned a little about the Kappa, a strange little devil-god that looks like a cross between a turtle, a frog, and a human.  While most people won’t have the time to go for a walk in this area, I do recommend it for people going to Hiroshima to work/live in the area. 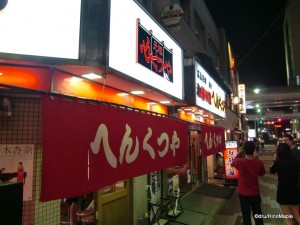 As I mentioned, everything else in Hiroshima hasn’t changed.  The area around Ebisucho is still a hangout for good food and the sex trade in Hiroshima.  There is one shopping arcade that goes from the Peace Park towards the station that is nice to visit.  I found a nice park that went parallel to the shopping arcade that is near the peace museum.  It’s interesting as it has a few trees that survived the atomic bombing.  I wouldn’t consider this area to be of special interest as it’s not special.  There aren’t too many pieces of art, but it’s nice.  When going to Hiroshima, I always recommend going around and just exploring.  Pick a direction and just go.  You’ll always find something interesting no matter which direction you go.

To read more about Hiroshima and the surrounding areas, please visit the following posts on Dru’s Misadventures: