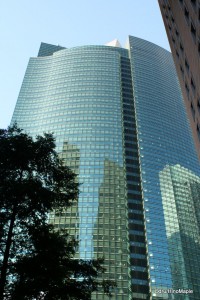 Shiodome is one of the most modern looking areas of Tokyo.  It was once an old train terminal that has been redeveloped into a modern city within Tokyo.  There is no real way to describe this area, other than to say that it is awe inspiring.  There are many ways to enter the Shiodome area.  The easiest is to use the JR lines and use Shinbashi Station.  The station is located on the corner of the Shiodome area.  The station is also served by the Ginza and Asakusa lines if those are more convenient for you.  The best way to enter the area is to use the Oedo line.  The main reason to use the Oedo line is because you will start off under Shiodome.  The Oedo line’s station is located in the centre of the area and as you head up into the area, you will slowly get an idea of what Shiodome really is.  The Oedo line itself was built deep underground.  Regardless of which exit you take, you will start off with nothing more than a few hallways before you slowly make your way to the surface.  Each set of escalators will take you to the next level.  Think of it like peeling leaves off an artichoke.  You reveal more and more until you can see the entire place for all its glory. 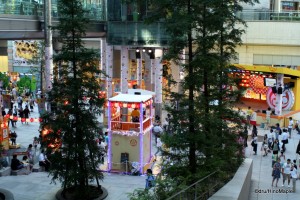 Plaza in front of Nittele (This is a temporary special event)

The first layer that you will happen upon is an underground shopping complex.  Do beware that if you head in the wrong direction, you will be heading towards the residential district.  This area is not as interesting, but still worth a quick look.  You will be amazed by the vast area that you can wander that is completely underground.  Each building in the area has its own set of artwork, or something interesting to see.  Most of the buildings have their own restaurants within the basement area, and there are various shops located in the basement concourse.  Heading in the direction of “Shinbashi Station” is the easiest way to see everything, but if you do reach Shinbashi Station, you will have gone too far.  The underground area also has a few interesting plazas to see.  One of those plazas has an interesting dome object that doubles as a waterfountain.  Beware as the signs are written in Japanese with minimal English warning you of when the fountain show will begin.  The underground plazas are especially pretty in the Christmas season.  The Dentsu building, located on the north-east corner is home to an annual light display that is popular among couples during the Christmas season.  It’s common to see couples enter a small teepee shaped metal tent and press a button.  This will randomly make a set of lights turn a specific colour that coincides with their fortune.  Some couples will press it together to see if their fortune is good as a couple or not.  Obviously this is not a real indicator of luck, and everyone just enjoys it for the fun.  Generally, the lines for this attraction can be extremely long during the Christmas season. 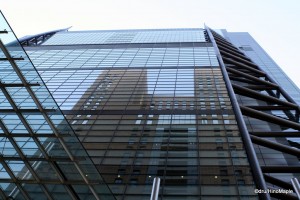 One of the more interesting things to do is to visit the Nittele Building.  This is the headquarters of Nippon Television.  They do all of their broadcasting from this building, and film various shows as well.  It’s very common to see newscasters, weathergirls, and various celebrities filming live segments for the news or morning programs.  They also hold various concerts at times with musicians of all calibers performing.  The largest concert that I have seen was one for Arashi during their annual 24 hour telethon.  They also included a 3D segment of the concert.  Like the FujiTV studios in Odaiba, the Nittele studio also has various activities throughout the year in a concourse near the station.  It’s a great way to check out some of the television culture while you are there.  If you want to get on TV, it’s best to arrive in the morning as they always have segments being filmed throughout the complex.  If you aren’t interested in the Nittele building, it’s still a great place to visit for the building and architecture around it. 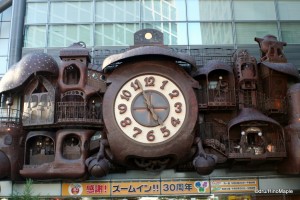 If you make your way up to the Yurikamome Station from the Nittele Building, you will be taken to a sky walkway.  The route to access this walkway, next to the Nittele Building, is a set of long escalators which provide a view of the central complex.  It is also a lot of fun to ride up and down the escalators due to their length.  If it’s busy, it isn’t as much fun as you can’t really play on it and take fun pictures.  At the top of the escalators, you will be able to see one of Hayao Miyazaki’s works.  He designed a large clock that performs every hour.  If you have ever seen one of his films, you will easily recognize his style of art within this clock itself.  It can be a little busy during the performance, so get there a few minutes before to get the best viewing locations.  Do note that it’s best to go during office hours as there are less people watching the show.  Once you reach the sky walkway area, you will be presented with a maze of walkways.  All of the walkways connect the various buildings high above the street.  Glass walls were built into the walkways to protect you from falling, or prevent you from jumping onto the street below.  There aren’t many support beams to block your view, so you’ll be able to see everything that’s around you.  The best time to visit the walkway is at night.  Once the sun goes down, fluorescent lights turn on giving the area a futuristic feel.  You cannot imagine the different tone the area takes up when things are dark. 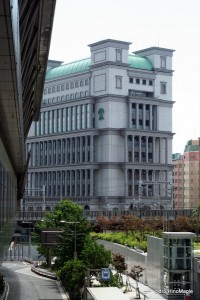 Shiodome is a very interesting and futuristic looking area.  The buildings may look normal at times, but they also have a certain aesthetic that can’t be explained.  The area is very stale due to the lack of greenery, but the dynamism of the area is unique and intriguing.  Like any other area of Tokyo, the area has two different sides, if not three.  There’s the daytime, the nighttime, and the overnight side.  In the day, things are bustling with people moving from A to B.  The TV studio is running at full blast producing morning shows, and the shops are open.  At night, people rush home or head to the bars.  The atmosphere is a little quieter, and things look extremely different.  Overnight, the area is deserted.  You can walk around and not see anyone, although this is rare.  It can almost feel like a ghost town.  I wouldn’t recommend staying overnight in the area as there aren’t many people around.  Enjoy it during the day and at night, but return home by your last train.  If you did get stuck, get out and head over to Shinbashi.  They have a lot more happening all night.