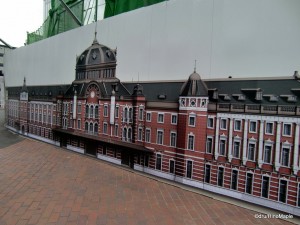 Tokyo Station is probably the most misunderstood station in Tokyo.  It is often referred to by visitors as “Tokyo” as it’s the first station people arrive at when taking the Narita Express.  Since Tokyo is actually a very large metropolis with many city centres, it’s easy to understand why people would get this wrong.  Tokyo Station itself is separated into two distinct regions.  The east side of the station is an older area called Yaesu.  This is the connection of Tokyo Station to Nihonbashi, which is the “true” centre of Tokyo, and Japan.  On the west is Marunouchi, a rejuvenated area that has lots of new skyscrapers, enough to challenge Shinjuku in terms of size.  Unfortunately, this area has been overlooked by many people, including myself, but as of late, it has been getting more and more interesting each year. 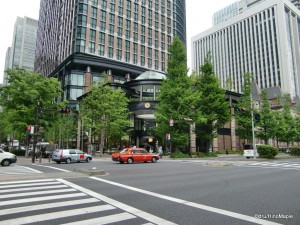 The east side, as I mentioned, is not very interesting overall.  It is where you can find cheaper eats and lots of salarymen and OLs.  If you want to see what a typical Japanese worker looks like, this is your best bet.  Of course, almost every area of Tokyo will allow you to see these people, but in terms of Tokyo, this is where you will probably see the most.  You will see many men in black suits, white shirts, and ties walking with their attaché case.  Women can also be seen sporting black suits, usually with skirts instead of pants, black tights, a white blouse, and plain pumps.  The main reason to enter this area is to find cheap food, and possibly some interesting shops.  Generally, there isn’t much to see or do for the average tourist.  You are better off staying on the west side where all the action tends to happen. 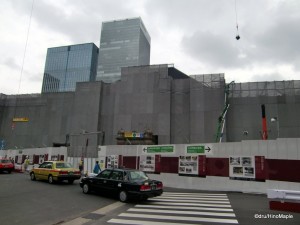 The west side of Tokyo Station, also known as Marunouchi is one of the newest areas of Tokyo.  It has been undergoing a renovation of sorts with various old buildings being torn down and new skyscrapers going up in their place.  Walking out of the station can be a challenge as they are now working on the station’s entrances and various buildings within eye sight of the exit.  The first thing you do when you exit the station isn’t to walk out too far, but far enough and then to turn around.  The station has a very old history, being originally built in the late 1800s.  During the war, the building was destroyed, but rebuilt at a smaller height immediately after the war ended.  The building itself is still very beautiful showing some of the architecture of the time.  If you enter from this entrance, you can still have a small feeling of being in an old train station, compared to some of the more modern stations that have a colder feel to them.  Do note that they are currently doing renovations to the station itself, but it is scheduled for completion by the end of this year. 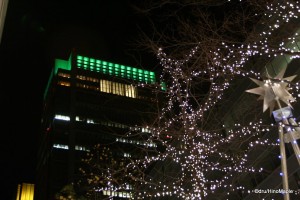 The area near the station exit has several new buildings for which you can pick and choose which one you wish to visit.  Unfortunately, they are all very similar to each other.  The good thing is that they are all very new and it can be interesting for a quick visit.  There are also various floors with restaurants and cafes for which you can drop in and get a nice meal.  Unfortunately, the prices for the meals are a little expensive, so you should be prepared to spend at least 1000 Yen per meal at lunch, more if you want dinner.  If you do go shopping, you will be able to see various European brands and other high end brands as well.  Marunouchi is not for the cheap shopper.  The good thing is that it’s very architecturally beautiful.  With the buildings being new, you get a great chance at seeing the latest building designs in Tokyo.  Shinjuku’s skyscrapers were primarily built in the 70s, and you can somewhat see that reflected in their designs.  Marunouchi does the same, but with an emphasis on recent designs.  The interiors are also unique within Tokyo, so a walk inside is always recommended.  If you do have the time, walking out towards Yurakucho will bring you to the Tokyo International Forum.  This building is a conference centre that mainly serves for business conferences.  You won’t be seeing too many conferences that are open to the public, or ones that are popular with the public.  This may change in the future, but I personally doubt it. 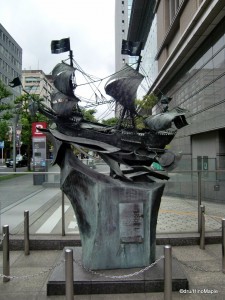 Art in and around Marunouchi

Marunouchi is also known for its art and events.  Since the rejuvenation started to finish, the various buildings within Marunouchi have grouped together to put on new events and to present art.  There was a campaign where they had various artists put a design onto a cow and placed them throughout the area.  It was similar to other various public art projects where the money raised went to a specified charity.  In the last few years, they have created one of the most popular Christmas events in Tokyo.  Along one of the main shopping streets linking Marunouchi to Yurakucho, there are various public artworks on display.  This street is also popular around Christmas as they have one of the biggest Christmas light displays in Tokyo.  This is in conjunction with the display around the Imperial Palace.  From around mid-November till about December 28th, the entire area of Marunouchi is lit up with Christmas lights.  These light displays are nice and worth a visit, but after one visit, it’s unlikely to change much in the future.  They tend to recycle the lights, and instead of trying to arrange them in a different way, they tend to use the exact same style of display.  I do recommend visiting Marunouchi at night as the feel can also be very different, but do note that things are much quieter as it is still a traditional office area.  You can enjoy a little in terms of a night life, but it still can’t compete with the traditional night spots of Tokyo.