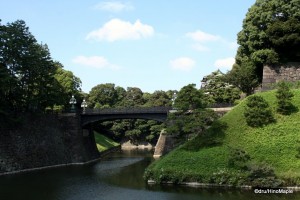 Famous bridge for pictures at the Imperial Palace

The Imperial Palace is one of the biggest tourist spots in central Tokyo.  It is the home of the Japanese Imperial Family and home of one of the most beautiful parks in Tokyo.  The area itself is somewhat difficult to reach, but the area also provides one of the most unique views of Tokyo.  The most famous way to reach the Imperial Palace is to exit from Tokyo Station, Marunouchi Exit, and head down the biggest street.  This will lead to the main entrance of the palace.  Following this road will take you to a vast open area with no buildings.  This is the Imperial Palace.  Once there, you will see a small park full of cherry trees on the east side.  This is one of the most beautiful views for cherry blossoms in Tokyo.  It is always popular, but do be aware that security is very heavy and they will tell you if you are doing something wrong.  There is also a major street running straight through the middle of this area called Uchibori Dori.  On the west side of this street is the main entrance to the Imperial Palace.  This area itself isn’t special as almost all of it is full of gravel.  You can walk up to the inner moat of the inner palace grounds, but that’s about it.  You can take photos of the palace from behind the moat.  It is popular to take pictures of two famous bridges, but access onto the bridges and into the palace is extremely limited.  Twice a year, you can enter, but you will still be restricted to specific areas, and if you take the tour, the chances of English guides is low to none at all.  If you do head over, January second is a good day to visit as you can enter the inner grounds a little and you can see all of the dignitaries from around the world visiting the Emperor and wishing him a happy new year.  Many of the dignitaries will be wearing their traditional clothes as it would be an official visit.  If you are lucky, when a new Ambassador visits the Emperor for the first time, they usually take him or her from Tokyo Station to the palace by horse and carriage.  It’s a unique experience that I hope to experience once, but I haven’t been that lucky. 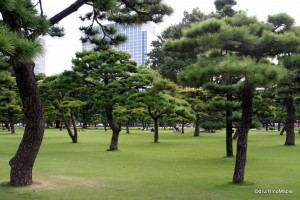 Free garden in front of the Imperial Palace

Just north of the main entrance is the Imperial Palace East Gardens.  I have not had the luxury to visit this area yet, but it is the home of the original Edo Castle.  The Imperial Palace itself sits on the property of the original Edo Castle.  This was the main castle of Tokyo that was destroyed either in the late 1800s or during World War II.  Unfortunately, the information on the internet is not very clear on an exact date of destruction.  Today, the East Gardens are open to the public, but the sights are no where near as grand as in the past.  The old castle is nothing but a stone foundation, but the gardens are sure to be nice.  Visiting this area, you are sure to get away from the hustle and bustle of the city and be able to relax.  If you were hoping to see a real Japanese castle, unfortunately, you have to leave Tokyo to see one.  If you have the energy and the time, heading a little farther north, you will come to the Nippon Budokan, or Budokan for short.  This is one of the most famous concert venues in Tokyo, and also the biggest martial arts arena in Tokyo.  It was originally built for the 1964 Tokyo Summer Olympics, but it is also a very popular venue for artists.  There are several famous places to play a concert in Tokyo, and the Budokan is one of them.  Tokyo Dome and Jingu Stadium are bigger and more famous, but you’d have to be a huge star to play there.  If you are lucky, you can always buy a ticket to see one of the judo competitions.  It is said to be one of the most interesting places to see judo. 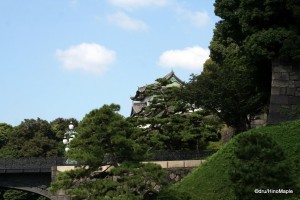 View of the Imperial Palace from the public areas

While the Imperial Palace is a famous spot for tourists, many locals take advantage of the palace grounds as well.  It is a popular spot for cherry blossom viewing and seeing the autumn leaves.  There are hundreds, if not thousands, of cherry trees located on and around the Imperial Palace.  During the cherry blossom season, the cherry trees are lit up at night and people jockey for position along the moat.  It can create a very nice and interesting picture.  The biggest draw for locals is the road encircling the palace.  The road goes around the palace in a ring for 5 kilometres.  This provides an ideal location for people to go running.  It’s most popular for people to head to Takebashi Station, walk to a nearby sento (public bath), change and go for a run.  When they have finished, either 5/10/… km run, they return, take a shower, and head back home.  If you are a runner, this is the once place you must go to enjoy a nice morning, afternoon, or night run.  The most popular way to run around the palace is to go counter-clockwise.  You start off from Takebashi Station and head uphill until you are near Hanzomon Station.  From there, it’s downhill to Sakuradamon Station.  Because the uphill is steeper going counter-clockwise, it’s easier, so most people go this way.  Also, at night, if you go clockwise, you will have many headlights pointed in your face.  This makes it difficult to see with the glare.  There is one thing you must be careful about, and that’s the pollution.  When running in other areas, there is less pollution.  When I had run in this area, I didn’t have problems as I am used to Tokyo, but after this run, my clothes were covered in a thin, or thick depending on your viewpoint, layer of soot.  This can be disgusting to most people, do be prepared.  The good thing about this is that you can see a lot of Tokyo in a short time, and experience another aspect of Japanese life.  Running is now a major pastime for many Japanese people, and it’s growing. 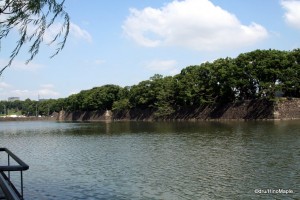 The main moat around the Imperial Palace

Is the Imperial Palace worth a visit on your next trip?  Many people say yes, but for me, it’s 50/50.  I think it’s a nice place to go, but I wouldn’t put it high on my list of places to visit.  You can do many things there, but you are still extremely limited, and you may be in for a disappointment.  If you go expecting nothing, you will probably enjoy it a lot more.  If you go expecting to be wowed, you will probably be disappointed.  Just go and have fun as always and you will be fine.