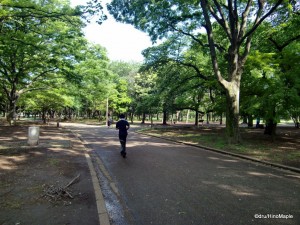 The Imperial Palace is the most popular place for running, but it is not, by far, the only place to enjoy a run.  There are countless other locations that make for a good run.  In central Tokyo, there are three good areas for running.  The second most popular place, after the Imperial Palace, is Yoyogi Park.  This is a large public park that is free to enter.  The closest station, for most people, would be Harajuku Station.  The park is located just behind Meiji Jingu, but be aware that heading into Meiji Jingu, and running, is not allowed.  The main entrance to Yoyogi Park is located on the south side, across from the Yoyogi National Stadium.  If you don’t see it clearly, you aren’t really at the entrance.  The other way to tell you are going to the wrong place is to look for the large wooden Torii (gate).  If you see that, that’s the route to Meiji Jingu and the guards will probably stop you from entering.  The park itself is a nice short run.  Upon entering, just keep going straight and you’ll naturally enter the inner loop.  This loop is less than 1km long, probably about 700m.  It’s a nice loop and you’ll be able to enjoy the various people relaxing in the park.  You’ll be within eye sight of the large fountains, and you’ll be able to see various school kids practicing their drama skits.  You might be lucky to see maids, various costumes, and idols getting their pictures taken.  It’s a popular site for this.  If you are lucky enough, you can even enjoy the cherry blossoms.  Overall, the park is nice as it’s fairly shaded in the summer, but due to the number of people relaxing, it can be a little difficult to enjoy it all the time.  It’s not perfect, but it’s still great.  If you are staying in the Shinjuku or Shibuya region, Yoyogi Park is very close and easy to reach without any travelling. 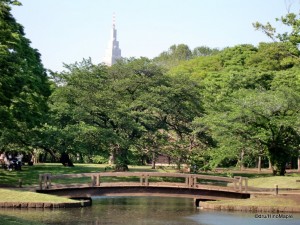 Next door to Yoyogi Park is Meiji Jingu Gaien.  This is a large complex of greenery and sports stadiums.  It was built during the 60s for the 1964 Olympics.  Since then, the buildings have been maintained and the area has become one of the centres of sports in Tokyo.  While Tokyo Dome is the home of the Tokyo favourite, Yomiuri Giants, Meiji Jingu Gaien is home to the Yakult Swallows and the Emperor’s Cup final for the J-League.  For runners, there is a major loop road that provides a good circuit for running.  The loop is roughly 1.5km in distance and generally surrounded by trees.  Since the road is a loop, the inner sidewalk has almost no traffic to contend with making it an ideal place to run.  In the middle of the loop, there are courses for kids to learn how to ride a bike, various baseball teams walking to and from the many baseball fields in the area, and lots of security keeping an eye on people.  I would still recommend this loop for running, but due to the popularity of the area for families and others, it may not be the best for all people.  Also beware of the Swallows games as it will be extremely busy near the start and at the end of the game itself. 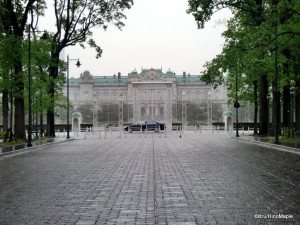 Located next to Meiji Jingu Gaien is the Akasaka Palace (State Guest House) and Togu Palace, home of the crowned Prince Naruhito, the heir to the Japanese throne.  This is a very ideal running route, in my own opinion.  This route is around 5km in length with no lights.  It is similar in distance to the Imperial Palace, but far superior.  The route itself isn’t very busy as most Japanese people avoid it.  When running, I usually encounter serious runners only.  The main reason only serious runners tend to use this route is the fact that there are two significant hills.  While the Imperial Palace has only one hill, which isn’t very steep, the two on this route are fairly significant.  The first hill is located on a small section on the east side between Aoyama-dori and an elevated highway.  This is also the most dangerous section of road as the sidewalk is very narrow.  There is barely room for one person to run, so passing oncoming runners can be a challenge.  Thankfully, this section is very short.  On the opposite side of this stretch of road is the other hill.  It is not as bad as the eastern section, but still a good workout.  Generally, the area has a nice wide sidewalk for 90% of the route and lots of police and cameras.  Unfortunately, the scenery can be a little sparse due to the high walls keeping people out of the palace grounds.  The only interesting thing to see would be the Akasaka Palace.  If there is a head of state visiting Japan, such as the US President or the Queen of England, they will be staying in the Akasaka Palace.  During this time, there are state flags everywhere and extra security.  Don’t let that detract you from running around the palace.  It’s still nice, even with the police watching you as you run.

If you are adventurous, and in need of a marathon run in Tokyo, doing all three of these parks, along with the Imperial Palace is a great way to see everything and do minimal stopping.  This route will be in the neighbourhood of 20km to do a loop of each on, but may not include a return trip.  Be aware that brining money for a train to get back, or a few hundred yen to buy a drink at various vending machines or convenience stores is advised.  The summer can get very hot and humid, so keep hydrated.  Other than that, be adventurous and have fun exploring the city on foot.