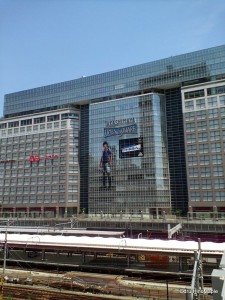 You all know what time it is.  It’s World Cup time.  Most of the world is watching the World Cup these days and Japan is no exception.  Since 1998, Japan has been in the World Cup tournament consecutively.  In the 2002 World Cup, Japan and South Korea hosted the tournament leading to football (soccer) fever.  From what I’ve been told, Japan was painted in a sea of blue, the colours of the team.  Their nickname is Samurai Blue, and during any World Cup, this slogan will be shown everywhere.  After the Japan and South Korea World Cup tournament, Japan’s football team has been held to a very high standard.  The team has been through its ups and downs, and unfortunately, it’s in a down at the moment.  The star player, Shunsuke Nakamura is out with an injury and probably won’t return in time.  The entire squad is not doing very well losing every game leading up to the South African tournament.  The sentiment before the World Cup started was that Japan would either lose, or draw all of their matches.  With the first game against Cameroon ending with a big win for Japan, hopes are up for Japan.  It’s very possible that they will qualify for the next round, but Japanese people are still grounded in the team’s chances.  Regardless of their realistic predictions, Japan is still cheering their team and hoping for a good result.