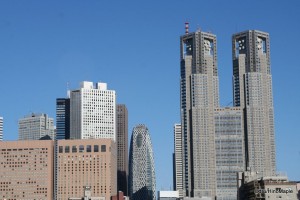 View from my Apartment

In September of 2005, I arrived in Tokyo for the second time in my life and for the first time, I would live in Japan.  For the next five and a half years, I would live in a tiny apartment in Shinjuku.  Technically, I lived in Shibuya, but in reality, I lived closer to Shinjuku and I would later realize that it was impossible for me to explain where I lived if I said Shibuya.  Shinjuku was the best word to use and explained my location perfectly. 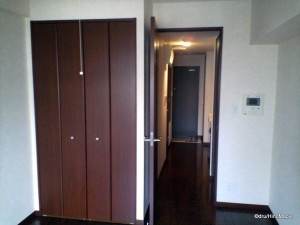 My tiny apartment, after moving out.

As I said, my apartment was a tiny 23 square metre apartment.  My bedroom itself was a paltry 10 square meters or 107 square feet.  Yes, it’s tiny. It cost me about ¥100,000 a month and I lived on a busy major arterial road.  Did I mention that I also lived with my girlfriend?  It was a cramped place that really wasn’t suitable for two people.  It was barely enough space for one, but it was home.  The apartment wasn’t as bad as I made it out to be just now.  While it was tiny, and it was expensive, the price of the apartment was mainly due to the location.  I was fortunate to live only 30 minutes away from Shinjuku, and that’s on foot.  I could easily find a great restaurant and getting out of town was easy.  Every weekend, I would walk into Shinjuku and enjoy the various shops.  It was busy, but not terribly so.  Over the five years, I got to know Shinjuku very intimately.  I know every corner and every path around the station.  Shinjuku Station is one of the most complex stations in the world, but for me, it is a simple place that takes but a second to get around.   If things did get too noisy, it wasn’t too hard for me to find a small quiet oasis just a month away. 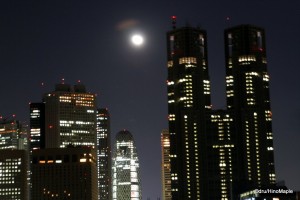 The cost of living is not as high as you would expect.  Everyone says that living in Tokyo is very expensive.   For the first while, I would have said that’s true, but if you are smart and know where to go, you can live relatively cheaply.  The other advantage for me was that I lived in a tiny apartment.  It may be tiny, but the cost for utilities was equally tiny.  I was also very fortunate in that the quality of restaurants were very high.  You generally get what you pay for.  If I wanted to splurge and eat something nice, I could easily go to Shinjuku, or somewhere in my area to find something wonderful and romantic.  If I needed something dirt cheap, that was also available.  There were also a few grocery stores where you can get food at a very reasonable price.  Surprisingly, for such a central location, there were lots of options, but only a few that were worth a visit.  Thankfully, I lived outside the Yamanote line, which meant I had more choices.  Those who live within the Yamanote line are saddled with a cost of living that’s MUCH higher.  I was also fortunate that my favourite grocery store wasn’t such a major chain.  Major chains in Japan tend to have somewhat higher prices for some strange reason.  If you ever do decide to live in Japan, walking around the neighbourhood for at least a radius of 2km is necessary to find all of the cheapest places you need. 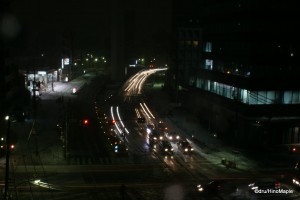 Traffic late at night, with snow.

The biggest problem for me and my apartment was the noise.  My balcony was adjacent to a major street. There were cars on the street at all hours of the day.  Ambulances, police cars, fire trucks, and even gas vans would blast be my apartment at all hours with sirens blaring.  In Tokyo, the gas company has the same status at times as an emergency vehicle.  I believe this is mostly to prevent major explosions from a pipeline, especially with buildings packed so closely together.   In the beginning, it was very cool to be able to hear all of the strange sirens of Japanese emergency vehicles, but after a year, it did get annoying.  By far, the most annoying sounds were the loud scooters, bosozoku bikes, and decotora.  Bosozoku are a type of teenage motorcycle gang, which is like recruitment to the Yakuza, but that’s not always the case.  They have very distinct bikes with no mufflers.  Their trademark is to ride around and make as much noise as possible.  While coasting to a stop, they will rev their engines as loud as possible, even though it does nothing but hurt the engine.  The decotora are trucks that have paintings on the side and hundreds of flashing lights.  Think epilepsy inducing strobes.  These trucks are usually okay, but at times, they add noise makers that “pop” as they use the engine brake.  It was the loudest engine noise you could ever think of.  I did get used to the noise, but it didn’t help me to get a good night sleep either. 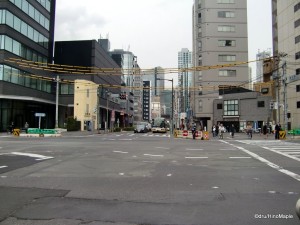 While the street was a pain due to the noise, it was also a blessing.  I had one of the best views of Shinjuku.  I could look out everyday and see the Tokyo Metropolitan Buildings.  Each night, the buildings would be lit up and the colours would change every so often.  It would sometimes change due to a specific event, such as women’s day or earth day.  It was very nice.  I would also be able to see the changing skyline as new buildings would be built.  During a few storms, I had the privilege to see lightning and rain falling down as if God was angry at the world.  It was an amazing site, and living somewhat high above the street gave me a great view of things.  I even had a view of a major highway construction project that has lasted well over my 5 years at this apartment.  When I moved in, they were in the process of building an underground highway.  When I left, they completed the highway, but they were still doing the arduous process of fixing the roadway itself.   They were placing all of the overhead wires underground and beautifying the entire street.  Alas, I believe it would take another 2 to 5 years to complete everything.  I guess I may never see the final product. 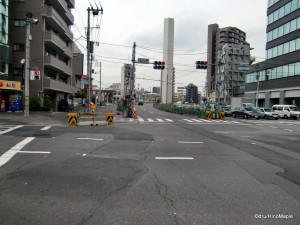 One of the toughest things to get used to was the lack of greenery.  While the area was super convenient, it was also lacking trees and shrubs.  There were several parks in the area, but none of them were within a short walk.  The definition of a park is very different in Tokyo.  A park can be nothing but gravel paved into a square which is only good enough for a game of catch or other simple small area sports.  There were no chances to play touch football or even futsal.  It took a couple years before I was used to this.  It was also impossible to get out of town easily by car or on foot.  The west side of Tokyo is a large metropolis.  The north and west sides are much easier to get into the countryside.  This was part of the reason I sold my motorcycle last year.  The only consolation prize was that it was extremely easy for me to hop onto a major train line, or even get to the Shinkansen to get out of town, but that usually left me in a similar looking area, a major city. 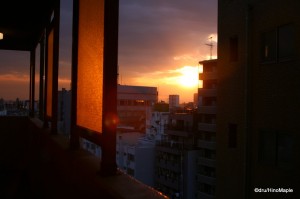 Sunset from my apartment building.

All in all, living in Shinjuku is great.  I loved it and I will definitely miss it.  I wish I could continue living there, forever, but the cost and size was too much.  I found a great place on the other side of town, and now I get to start over again.  I’ll be learning more and more about the east side.  Over the next year or so, expect more information about eastern Tokyo.