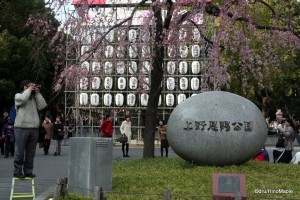 West of Ueno Station brings you to Ueno Park.  This is probably the biggest reason people visit Ueno, at least as a tourist.  The park is one of the largest in Tokyo.  The park area itself contains a temple, a zoo, three museums, and various activities any other park would have.  The park itself is nothing special.  There are few places to actually enjoy a nice picnic.  Most of the paths in the park are paved, with little to no areas to sit and relax.  It’s a very typical Tokyo park.  The best time to visit the park itself is during the cherry blossom season, in spring.  There are over 1000 cherry trees in the park allowing you some of the best views of the park itself.  During the cherry blossom season, the city brings in extra lights to light up the cherry blossoms at night.  While most parks do the same, Ueno Park is one of the most beautiful to see.  As with any other park with lots of cherry blossoms, the park will be extremely busy at the peak of the cherry blossom season.  It’s advised to be careful as you will more than likely have to navigate between people to get around.  At night, it can also get very noisy as many office workers are drinking and fairly drunk at that time too.  Many people do avoid the park for this very reason.  The daytime is still very tame, but in true Japanese tradition, at least nowadays, it’s best to see the blossoms at night. 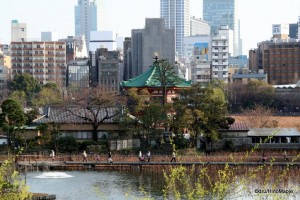 Ueno Park has four major religious structures.  The first you will encounter, near the entrance, is Kiyomizu Kannondo Hall/Temple.  This hall is famous once a year for its “Dolls Funeral”, or Ningyo Kuyo.  This funeral for dolls is related to the Hinamatsuri.  The Hinamasturi is a “Dolls Festival” where Japanese people display dolls for a happy life for their daughters.  It’s an elaborate festival that is celebrated at ones home.  There can be several dolls, and when Japanese people get older, they must decide what to do with them.  Some believe that they are spirits and must be treated with respect.  Due to this superstition, they cannot throw them away.  Several temples and shrines around Japan hold a type of Ningyo Kuyo each year in order to wish them luck in their next life.  The Ningyo Kuyo at Kiyomizu Kannondo is not very large, but there are probably hundreds of dolls, including stuffed animals such as Mickey Mouse, that are “cremated” at this time.  It can be interesting to watch, but I believe there are more interesting versions outside Tokyo, but unfortunately I do not know them.  Next Hanazono Inari Shrine, which is dedicated to the Inari, or fox.  These shrines can be very interesting as they tend to have several red gates and stone foxes with red bibs.  Toshogu Shrine is the next religious building.  It’s a small shrine located deep within the park.  It is linked to the shrines in Nikko, however this shrine is not as grand.  Unfortunately, I have never been to the shrine itself, but it is recommended to enter nonetheless.  The last religious structure to visit would be Benten-do.  It’s a hall dedicated to a female Buddhist god.  This hall is supposed to be popular for various reasons; probably wealth and knowledge, but unfortunately, I have forgotten the true meaning.  I have also heard that couples should avoid going to this hall together as it could create bad luck for their relationship. 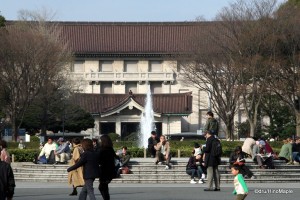 In terms of museums, you have the Tokyo National Museum, The National Science Museum and The National Museum of Western Art.  The Tokyo National Museum is located at the northern end of Ueno Park.  It is the biggest and most important museum of the park, for obvious reasons.  On display are various paintings, writings, pottery, and of course the standard statues of various eras.  It’s a wonderful way to learn and hopefully appreciate the history of Japan.  It can be difficult to visit the entire museum in just a couple hours.  I would suggest arriving somewhat early and to allow yourself enough time to take your time throughout the museum.  If science is more interesting, the National Science Museum is an interesting place to visit.  They have various exhibits in and around the museum itself.  It is a relatively compact space and worth a visit with children.  The quality compared to a science museum in your own hometown will depend on what is available.  Many of the exhibits are interactive, as any good science museum is, but do look at their website and see if they have anything you’d be interested in seeing before heading in.  The last museum located in Ueno Park is The National Museum of Western Art.  I have never ventured inside the museum; however, there is a famous sculpture by Rodin, “The Gates of Hell” located outside the museum itself.  This gate alone is worth a quick walk up to the museum.  There are also a few other sculptures located around the National Science and Western Art Museums that are picturesque. 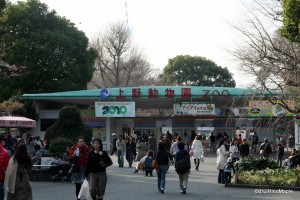 Ueno Zoo is a popular destination for people, especially for Japanese people.  It is split up into two sections that are separated by a monorail.  Within the main section is a 5-storied pagoda.  It can be impressive.  The west side of the zoo, there is a children’s zoo.  This is mainly a petting zoo for children to hopefully enjoy feeding various small animals.  The zoo used to have a panda, but unfortunately, it died a little while ago.  The zoo is a popular place on weekdays for schools to have a field trip.  It’s also popular among locals on dates, or bringing their families for a nice day out on the weekends.  As you approach, you are sure to hear and see lots of kids.  Bring your patience cap when you visit and all will be fine. 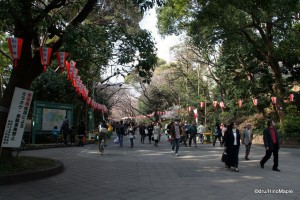 Ueno Park is a wonderful place to visit.  You can spend as little as an hour just wandering around, or up to a several days exploring all of the nooks and crannies that are to be found.  If you are visiting during the day, it is lovely.  There is a down side to the park when things get dark.  Because it’s an open and public park, it never truly closes.  It is open 24 hours a day, so when the sun goes down, all of the homeless people in the area venture into the park.  They can come out of nowhere and set up a small “tent” out of cardboard boxes.  It’s a little scary at first, but you have to realize that homeless people in Japan are very different than Canada, or America.  They tend to be very quiet and to themselves.  As long as you don’t stare, you’ll be fine.  You can even strike up a conversation with one of them if you dare.  Either way, Ueno Park is something you should see, especially if you are in the area.

This is part of my series on Ueno.  Please continue to read more about Ueno at Ueno – Corin Street, Tokyo Bike Town and Ueno – Ameyokocho.