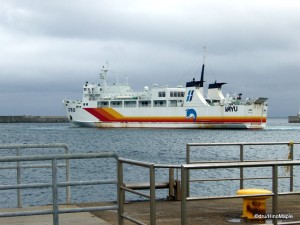 Ferry from Oma to Hakodate

Taking a ferry in Japan can be a completely new experience for anyone.  Taking a ferry in any country can be new.  Previously, my main experience on a ferry was in Vancouver.  Sailing between Tsawwassen and Swartz Bay (Vancouver to Victoria) was a common experience.  It is only an hour and a half on a large sized ferry.  Usually there is a cafeteria and lots of seats to relax.  It plied the waters of the Georgia Strait and went between Mayne and Galiano Islands.  The trip was just over an hour and a half and it was a beautiful trip.  You can see the beauty of the natural forested islands.  The trip itself was generally calm, but at times, it could be rough.  As a motorcyclist, it was also great because you could easily get a spot on the ferry at anytime.  First off, you are usually the first to board the ferry.  You were boarded at the front of the ferry (first to exit) where no other cars could park.  From there, you had a wooden block placed under your bike for safety.  The car deck was also very flat as there were no places for tie downs. 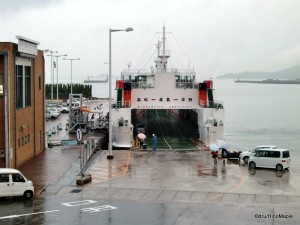 My other experience on ferries was between Dover and Calais in the 90s.  My first crossing was in a hover craft.  Unfortunately, I heard the sailing has stopped.  The hover craft was a nice experience, but nothing to call home about.  It was noisy, bumpy, but fast.  It was akin to being on a small prop plane.  The second trip was on a standard ferry.  I was on a tour, so we walked on.  There was a nice large shop and by the time you finished exploring the ship, it was pretty much time to disembark.  I can’t remember the time it took to cross, but it should be about an hour and a half as well.  Finally, I had a chance to take a ferry between Hong Kong and Macau.  It was so long ago that I can’t remember it very clearly.  It was, for the most part, a short and forgettable experience.  Out of all of my experiences, I’d say the Dover Calais trip on a regular ferry was the best. 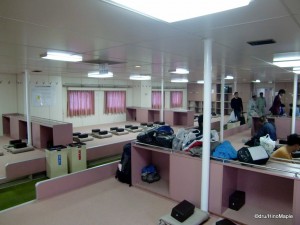 Tatami room of the ferry

Japan is a whole new breed of ferry services.  It is distinctly Japanese.  I have only taken ferries because I was travelling on my motorcycle.  The first trip was a short hour and forty minute ferry ride.  It was between the fishing village of Oma and Hakodate, Hokkaido.  This short ferry ride is a typical ferry in Japan.  It is not too big and not too large.  The car deck was somewhat dangerous on a motorcycle, but I had a nice small area to park.  They would put a towel over my bike to protect it, and tie it down on both sides.  This is a very common thing to do in Japan.  Usually, motorcycles are the first to board, but it doesn’t mean they are the first to disembark.  Generally, they are the last, as the door can be in a difficult position.  It really depends on the ferry, as always.  The trip itself is not special.  There is nothing to really see until you reach Hakodate.  I’d say it was somewhat boring as well.  My second trip on a ferry in Japan was from Tokyo to Tokushima, as chronicled in my Shikoku adventure.  This is a very different breed of ferry.  It is much bigger.  There are two car decks, but only one is for passenger cars.  These ferries are mainly for transporting cargo, rather than passenger traffic.  However, they double as passenger ferries to service long haul routes.  During the busy times, there are dozens of motorcycles strapped to each other with barely any room to walk between each bike.  Thankfully, they still tie them down regardless.  This ferry has all the amenities to survive for weeks, if you have to.  The ferry from Oma to Hakodate had very few amenities.  Mainly drinks, some snacks, and maybe a little alcohol, generally nothing special.  It also smelt bad.  The ferry from Tokyo to Tokushima was a luxury liner compared to the other ferry.  Depending on the ferry, you might get your own restaurant, but both offered vending machine food, desert snacks, alcohol, and alcohol snacks.  You could also buy ice cream, play slots, and take a bath.  While the toilets weren’t great, you had pretty much everything you could need. 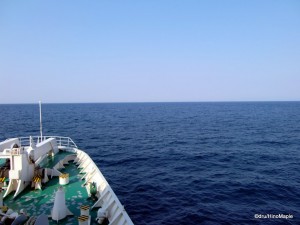 View of the Pacific from the ferry

In general, ferries all over the world differ slightly from each other.  When travelling long distances, it’s always important to know what to bring and to always be prepared for rough seas.  I was lucky that I rarely travelled in rough seas.  Most of my trips were nice and smooth, with only a couple on rough seas.  I would highly recommend a nice leisurely trip on a ferry if you can afford it and have the time.  It’s a great way to relax and just think.  However, as most people who visit Japan come for only a week or two, it’s not the most viable option.  For those living in Japan, it’s a great way to have a new experience in life, and I highly recommend it.