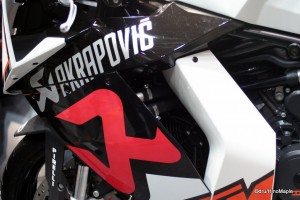 From March 26th till the 28th, the 37th Tokyo Motorcycle Show was held at Tokyo Big Site convention centre.  It was my annual pilgrimage to check out the new bikes being offered in Japan.  With the worst recession in years happening in 2009, I wasn’t expecting much out of this year’s motorcycle show.  It is true that the show was noticeably smaller, but it was much better than I could have expected.  All of the major motorcycle manufacturers were there, including all of the big name foreign companies.  It was a very important marketing campaign for most companies as the riding season has pretty much begun in Tokyo. 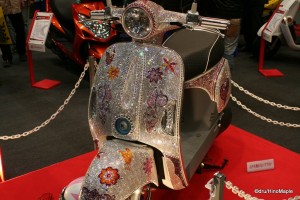 The motorcycle show has occupied the same two halls at Tokyo Big Site since I came to Japan.  They take over the lower floors of the West Hall, an outdoor parking lot, and the roof of the West Hall.  It may not be the biggest motorcycle show in the world, but it is a very interesting one.  The show itself is centred in West Hall 1 and 2, which form a U shape around the atrium.  Upon entering the ticketed area, you are funnelled into West Hall 2 where you are immediately greeted by motorcycles.  Generally, the manufacturers line the outer wall of both halls, while parts and accessory companies take the middle.  Lining the inner wall are the local companies that sell things such as T-shirts, insurance, and magazine subscriptions.  You will almost always find people on the outer wall, rather than the inner wall.  For this year’s show, Hall 2 was dominated by foreign manufacturers, and Hall 1 was more domestic. 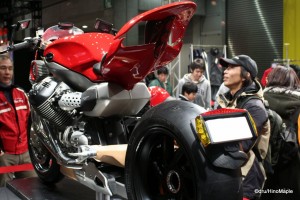 There are many things to do, other than just look at bikes while at the motorcycle show.  Most manufacturers hand out surveys, in Japanese only, where you put your name, address, and what you liked about their booth.  In return, you can get some free things, such as a catalogue.  It may not seem like much, but in good years, you can get pins and file holders.  Sometimes you spend the time to fill out a form only to discover you got something you didn’t want.  If you can’t read Japanese, you are better off not trying as they will send you junk mail if you don’t tick, or leave empty in some cases, the correct box.  The only downside to this aspect of the show is that people just mill about within the showcase making it difficult to take pictures and look at the bikes.  At the Tokyo Motorcycle Show, you can also test ride many of the new bikes.  Behind the halls, there is a parking lot where they do test rides of various motorcycles.  They even have starter lessons on scooters.  This year, they added a used bike display where you could actually purchase a used motorcycle.  I generally don’t go outside as I usually don’t have the time or patience to wait for a motorcycle to ride.  If you are like me, and finish the show within half a day, you can spend a lot more time following the scary men who take pictures of all the bike girls.  It’s a phenomenon that follows every motor show in Japan.  If there are nice cars, there will be nice women dressed in next to nothing, helping to display the bikes.  It can be difficult to see the bikes when they are “on display”, but if you are finished with the show, it can be interesting. 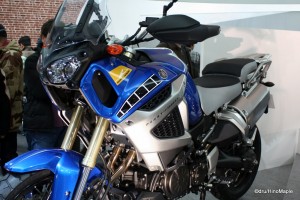 This year’s show, as I mentioned, was better than I expected.  All of the major manufacturers were there.  There were some very interesting new bikes.  The Japanese manufacturers weren’t very interesting, but they did provide a few new variants of their base bikes.  Yamaha finally unveiled their Super Tenere bike that was created for the Dakar Rally.  It wasn’t as cool as the concept version, but it did look ready for the Dakar.  It still had the “first edition” stickers all over it enticing more people to pay for it.  The best concept was by Moto Guzzi.  They produced the V12 LM which was, albeit impractical, a very interesting bike.  The tail was shaped like a bird, and they included bird cut outs on the tires.  Unfortunately, they forgot to put a nice headlight on the front, but that’s just my opinion.  There were several other cool race versions from other manufacturers, and there were the obligatory MotoGP bikes that were on hand.  Yoshimura had their typical display with the same standard Suzuka 8 Hours Superbike. 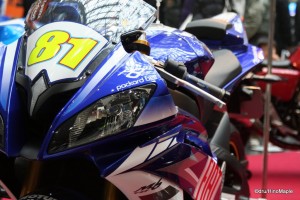 While the main focus of the show is on the bikes, there are displays showcasing the various circuits of Japan.  Generally, Ebisu, Tsukuba, and Motegi are represented by booths.  The others can be found in pamphlets given out at other various booths.  If you are into custom motorcycles, there is always a custom bike show, usually in the Atrium.  The police are also on hand to show off their riding skills, which are excellent, and to promote safety when riding.  If you are in need of help, JAF (Japan Auto Federation) provides demonstrations on how they can pick up your bike if it won’t start.  If you are a bike nut, and you are in town during the Tokyo Motorcycle Show, this is a must do on the list.  It’s easy to visit in the morning, and still have time to look around Odaiba in the afternoon.  Hope you can make it next year.