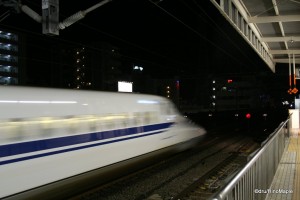 Travelling by train in Japan is one of the easiest, yet most complex things to do.  It is a must for anyone who visits Japan. Going to Tokyo, or even Osaka, you are generally better off using the trains.  Travelling by car can take a lot more time.  While the most used trains are in Tokyo, the most famous train line is the Shinkansen.  This is Japan’s high speed rail line, which happens to also be the first high speed rail line in the world.  It was opened before the Tokyo Olympics, and has been expanding ever since.  The most famous image of the Shinkansen has to be that of the 0 series.  These were the original trains that have only recently been retired.  As of December 2008, these trains were taken out of service.  All of the other trains have remained, but each year, several of the older trains have been retired. 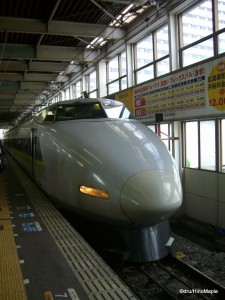 The first Shinkansen line was the Tokaido line.  This is the most famous line as it helps tourists head from Tokyo all the way to Kyoto, and for business travellers as it connects Tokyo with Nagoya and Osaka.  While all of the trains are called “Super Express”, this moniker can be confusing.  The Shinkansen is a super express, relative to regular train services.  When taking the Shinkansen, it’s very important to know which train you are taking.  A Nozomi, Hikari, and Kodama are all very different.  When using the JR Pass, the Nozomi is off limits.  If you do take this train, you might end up paying for the full fare regardless.  This is due to the sheer numbers of people using these trains.  Thankfully, the Hikari is still pretty quick with only a few extra stops, compared to the Nozomi.  The only downside is that travelling to Hiroshima and Hakata, in Fukuoka, is a little difficult. 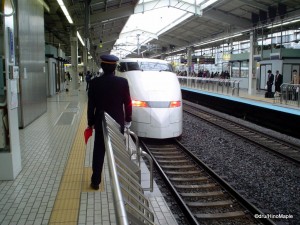 The second Shinkansen line is the Sanyo line.  This is essentially an extension of the Tokaido line.  This allowed the line to connect Fukuoka, in Kyushu, to Tokyo.  Unfortunately, the trains can take around 8 hours to connect both cities making it impractical for most travellers.  Flying is still the best, but Hiroshima can be better than flying, due to airport locations.  When travelling along the Tokaido/Sanyo Shinkansen, there are several trains you could use.  The oldest currently being used is the 100 series.  This is styled like the 0 series.  These trains only travel along the Sanyo portion for Kodama (local) services.  It stops at every station, so the chance of riding this is pretty low for the average traveller.  The 300 series is the next oldest of the trains.  This series was fairly popular, but as I am writing this, they are slowly being phased out.  Currently, they are used for Kodama and Hikari services, with an occasional Nozomi.  This was the first Shinkansen that utilized a wedge style nose, rather than a “bullet” style nose. 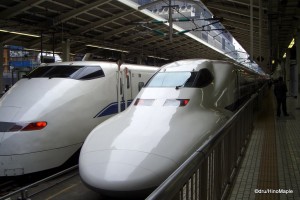 In Japan, one of the most famous Shinkansen has to be the 500 series.  It is the most unique Shinkansen for its styling.  These trains have a sharp pointed nose, grey and purple colouring, and resemble a fighter jet, rather than an airplane or train.  Prior Shinkansen were made to resemble airliners.  The 500, while striking, was not very popular with customers.  It was very fast, but it was like a Ferrari.  It was relatively small inside, due to the tube like shape of the body.  The windows were smaller, it was darker inside, and a little noisy as each car had its own engine.  Few of these trains were made, but it’s still a popular train for train spotters.  The recent designs along these lines are the 700 series.  The 700 was the first duckbill styled Shinkansen.  The N700 is an evolution of the 700 series with more emphasis on comfort.  The N700 is also the first Shinkansen to be all non-smoking.  They do have smoking rooms.  In the older trains, there are smoking cars.  Entry into these cars is only for smokers.  Anyone else would be forced to leave, not by the train staff, but by the amount of smoke inside the car.  You can literally see a thick haze of smoke, and you can smell it in the adjacent car.  The N700 is quickly entering service and will be the main workhorse of these lines.  While the windows are a bit smaller than the 700, there is wifi access, for a fee, and two prong outlets in each row.  They are definitely thinking about their businessmen. 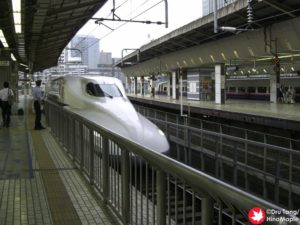 Connecting to the Sanyo Shinkansen is the Kyushu Shinkansen.  Currently, this Shinkansen line is under construction, with the southern portion complete.  This will link Hakata with Kagoshima, a city in the south of Kyushu.  At this moment, the line is running from Kagoshima to a point roughly half way to Hakata, the end of the line.  By the spring of 2011, this line is expected to be completed with through service to Osaka starting.  This line uses the 800 series of trains, which abandoned the duckbill style of the 700 series.  These trains have a more European styling, and the interior is said to be nicer than other Shinkansen trains.  When the line is completed, N700 trains will be used as well.  This will make it very easy to reach Kagoshima for most travellers.