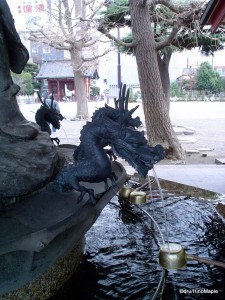 When people think of Japanese temples, they think of Kyoto.  Not everyone has a chance to go to Kyoto.  If you only have a week in Japan, sometimes you can’t afford the time to go to Kyoto.  While it can be done in a day using the shinkansen, sometimes it’s much better to just relax and visit a few temples around Tokyo.  That way, you can take your time and save a lot of money on train fares.  In Tokyo, most tourists will only visit two temples; Sensoji in Asakusa, and Meiji Jingu in Harajuku.  Technically, Meiji Jingu is not a temple, but a shrine dedicated to the Japanese religion of Shinto.  Often overlooked is the temple called Zojoji.  It is much smaller than the other two, but due to it being left off most major tour books, it’s a great place to see a temple without the hustle and bustle of the other two tourist spots. 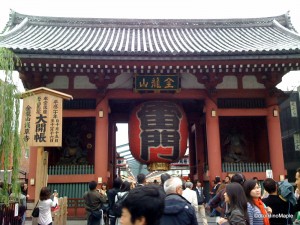 The first things to know when talking about temples and shrines are, what is a temple, and what is a shrine?  In a few simple words, a temple is dedicated to Buddha and a shrine is dedicated to a Shinto god.  It can be very difficult to know which is which, but in Japan, the easiest way to tell the difference is to look for the torii.  If there is a torii gate, a wooden archway near the entrance, it’s a shrine.  If there is a pagoda, or a huge statue of a Buddhist deity, it’s a temple.  In reality, there is no easy way to distinguish one from the other without research or looking at everything extensively.  Generally speaking, once you see a few of the temples and shrines, you tend to understand what the others will look like.  After visiting the these three temples in Tokyo, you don’t have to visit Kyoto, but as always, things are always slightly different, or they might have that one unique factor that makes it stand out.  Kyoto is still a very important place in Japan, and it’s still highly recommended.  If you don’t have time to make it out there, don’t feel too sad, but if you do have time, I would always recommend heading there. 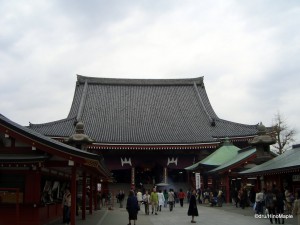 Sensoji is probably the most visited temple in Tokyo, and the oldest.  When arriving at Asakusa station, it’s very easy to get disoriented.  They have finished some remodelling of the station to make it easier for people to find their way to the temple, but once you are on the street, you can still be a little disoriented.  Finding your way to Nakamise Shopping Street is the best way to get to the temple.  There is a large Buddhist style gate called Kaminarimon, with two large wooden statues inside protecting the temple.  This is the start of the shopping street, and the approach to the temple itself.  The shopping street is great for the usual souvenirs that you’ll need when you go home, so be sure to buy everything here.  Other areas of Tokyo don’t always offer this type of touristy garb.  You can easily buy rice crackers and yukatas, along with other cheesy Japanese stuff.  Do note that most Japanese people will only buy food, and rarely, if ever, buy the other stuff.  The temple itself is beautifully bathed in red paint.  Being a big tourist attraction, you can buy an “Omikuji”, which is a fortune.  They generally include English.  First, put your money into the donation box; then shake a large metal tin.  After shaking, turn the tin upside down and shake it until you get a stick.  This stick tells you which drawer to open to get your fortune.  It’s pretty simple and once you are there, you can watch others do it first and just copy them.  They should have English on the reverse of the fortune, or a translation somewhere nearby.  Do note that if you get one with okay, or bad luck, you are supposed to tie it to a post so that it doesn’t follow you.  If you have good luck, you are supposed to keep it in your wallet for one year.  Next, you can enter the temple itself.  There really isn’t much to see.  When you enter, you can only stay in the front entrance portion of the main hall.  Here, you can toss some money into the donation box and pray for whatever you like.  Also note that it’s better to throw a coin with a hole in it as it’s considered lucky.  5 and 50 yen coins are the only coins to have a hole in them.

This is Part I of a two part series.  To continue reading about the Temples of Tokyo, continue to Part II.