If you haven’t heard yet, there is a huge Gundam machine on display in Odaiba, Tokyo.  Gundam is a very famous Japanese anime that began in 1979.  By and far, Gundam is the biggest mecha anime ever, and continues to draw huge numbers of fans.  The hardcore fans themselves can spend thousands of dollars on fan goods alone.  To give you an idea on how popular it is within modern Japanese culture, people will dress up as their favourite characters when there is a cosplay event, toy models of virtually every character has been sold at one point or another, countless T-shirts are created, and even mobile phones with Gundam logos sell out quickly.  The TV series, unlike American cartoon series, has evolved over time, and many of the characters have changed.  This has allowed the following generations of children to also enjoy and love Gundam, making any Gundam even a family affair. 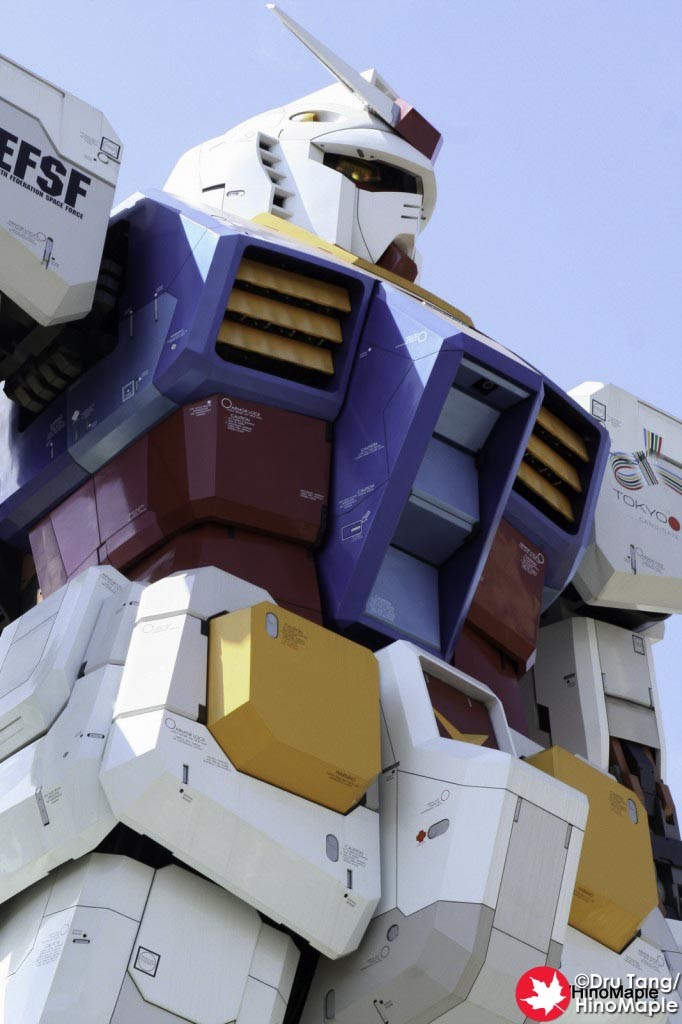 Close-up of the Gundam

From July 11, 2009, Shiokaze Park became the home of a life sized Gundam.  The biggest fans of the series flocked to the park on opening day to take various pictures of the robot.  It was built to celebrate the 30th anniversary of Gundam.  Since then, thousands, if not hundreds of thousands of people have gone to visit the robot.  Standing at 18 metres tall, it can be seen from the Yurikamome Line as you cross over Rainbow Bridge.  Your best bet is to get off at Daiba station and walk the rest of the way to the statue.  It is located west southwest of the station, at the corner of the island.  Going on the weekend guaranteed a crowded area.  The main approach to the Gundam is through the park itself.  You will have a nice opportunity to enjoy a nice view of Tokyo and Rainbow Bridge as you head towards the Gundam.  The entrance itself is located behind the Gundam.  You can also visit the official goods shop, but due to the line up to get inside, I didn’t venture in.  The main courtyard itself is not so special.  On the outer edges of the courtyard are food stalls and various activities for young children.  It isn’t that interesting for adults, but children will have a great time. 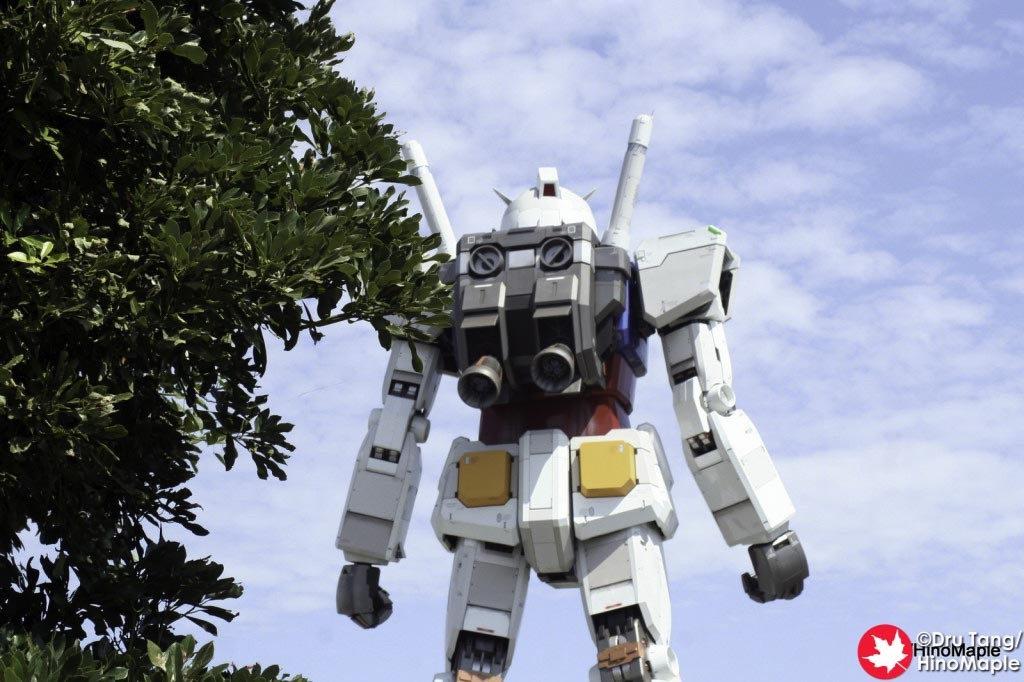 Approaching the Gundam from behind.

The main attraction is the ability to walk up to, touch, and take pictures as you walk under the Gundam.  It can take roughly 10 minutes to get through the long line, but the workers themselves are very good at directing people and keeping the line going.  Every 30 minutes, there is a small light show as the Gundam itself moves a bit and lights up.  The main event, however, was at night from August 20th till the 23rd.  If I read the information correctly, there was a laser light and music show surrounding the Gundam on each night featuring different music.  This was the only event where you had to pay to see the Gundam, but I’m sure it was an interesting concert to say the least.  Everything else about visiting the Gundam is free.  If you do have a free day, or just want to enjoy the view of Tokyo, please head out to Odaiba and see the Gundam while you still can.  Do be warned that the Gundam Project is scheduled to end on August 31st.  What will happen with it after that is anyone’s guess. 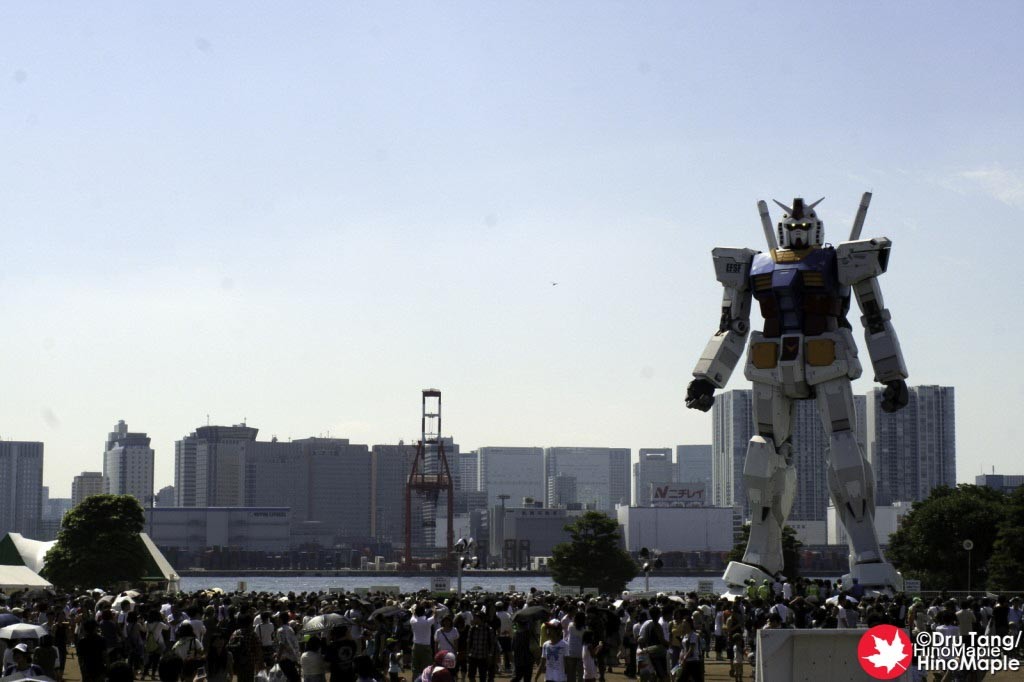 Famous shot of the Gundam in the square.

Note (15/05/2012):  The Gundam Project in Tokyo has ended.  The life sized Gundam has been taken down and moved twice.  In 2010, the Gundam was moved to Shizuoka, near Higashi Shizuoka Station for the summer.  After that exhibit ended, the Gundam was put back into storage before a final decision was made to place it back in Odaiba.  The life sized Gundam is back on display at the DiverCity shopping mall in Odaiba.  Located behind the FujiTV studios, you can now visit the Gundam for free with few lines as well as head into DiverCity to see a Gundam museum, eat at a Gundam Cafe, and buy Gundam toys.  The entire experience is being called GundamFront.

Also Note:  I had a link to the Gundam Project website, however they have removed the website and linked the URL to a University’s website.  If they decide to add a new official website, I will link to it here.