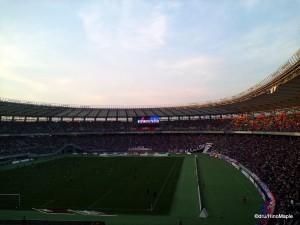 This year, 2009, I have had the luxury of attending two football games in Japan.  Last year, I wrote about my experiences to see football for the first time. This time, I had a different experience.  I was lucky enough to introduce a couple friends to FC Tokyo, and more recently, I was able to see a game as an Urawa Reds fan.  Generally, my first experience with FC Tokyo was how things were in 2009.  When attending a game, once you reach the stadium, you have to head into the stands where you’ll get your seat.  Then, just wait and enjoy the game.  FC Tokyo still runs “You’ll Never Walk Alone” and they still salute the crowd after every game, regardless of the results.  Since I was in the visitors side for a game this year, this post will reflect the feelings and emotions of the opposing time. 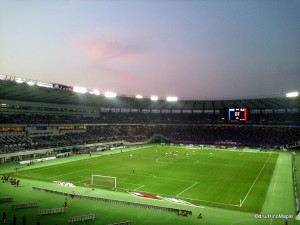 On November 8th, I headed into Ajinomoto with a friend of mine.  We were meeting a couple of Japanese guys who are big Urawa Reds fans.  Since it was Urawa, the entire visitors section was full.  It was all red and black, the team colours.  There were the die hards sitting in the front row behind the goal and a bank of over 10 huge flags.  There were also various flags of other countries flying in the main section.  Essentially, if it was red and black, it was flown.  The flag of Yemen, or the old German flag, was also flown because of the colours.  The significance of the country itself wasn’t important.  Getting to the stadium early, as in any other game, is important if you want to get good seats.  Roughly an hour before the game starts, the cheering starts.  There are a few dozen different chants that the crowd does.  There is generally a leader in the main stands along with a drummer to keep the beat.  There may be more than one drummer.  There are a few basic cheers and everyone has to stand and do the cheer.  The Japanese guys I was with were a little sad as the cheering had been started a little early for their tastes.  You need a little energy for the game as well. 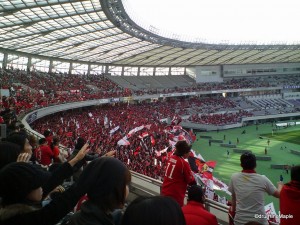 During the singing of “You’ll Never Walk Alone” for FC Tokyo, the Urawa fans went crazy.  Lots of comments talking about how stupid it was to sing the song, and when they talked about FC Tokyo, they cheered and whistled as loud as they could.  It’s nice to see that they’ll do anything to support their own team.  Upon the kick-off, the cheering subsided so that the fans could watch the game.  The flags were down and only basic cheers could be heard.  Everyone was at the edge of their seats hoping a weak Urawa would be able to beat FC Tokyo.  To give a little insight into the game, both Urawa and FC Tokyo were in trouble.  Urawa is in a sort of rebuilding season, and FC Tokyo’s main ace was injured, and their top foreign player left to play in the Middle East, for more money.  However, FC Tokyo had recently won the Nabisco Cup, so they had the advantage of momentum.  The first half of the game was pretty boring.  FC Tokyo dominated the game with several shots on goal, but Urawa was limited and trapped in the mid-field.  For the second half, the game remained the same, but Urawa made one excellent play where a couple of strikers broke free of the defence and scored.  The crowd was ecstatic and the cheering was deafening; soon after, FC Tokyo also scored, but it was an off side goal.  By the end of the game, Urawa kept their 1-0 lead and won the game.  Obviously, the Urawa fans stuck around and saluted their players. 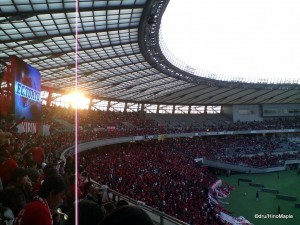 In general, the FC Tokyo fans are never very loud.  They enjoy the games and they cheer on their players, but I think the visiting teams are always louder.  They tend to be more focused compared to FC Tokyo.  I’m sure the FC Tokyo fans are also louder when visiting other stadiums, but at home, it’s sad to see they aren’t close enough to shake the stadium.  I still highly recommend going to an FC Tokyo game.  It’s very close to Tokyo itself and the team is still pretty good.  If you have a free afternoon/evening, it’s only 20 minutes from Shinjuku Station.  You don’t need to buy tickets ahead of time, but do wear blue.  Avoid any other colours or you might have to buy your own jersey.

Japanese Football aka Soccer (Urawa Reds VS FC Tokyo) is part of a series of posts talking about the football games that I have attended.  To read more about these games and football in Japan, please follow the links below: