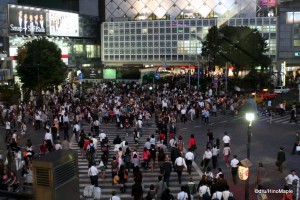 Shibuya is one of the most iconic places in Japan.  It was predominantly popularized by the movie “Lost in Translation” and “Fast and the Furious: Tokyo Drift”.  Both of these movies showed sections of what some people call, the busiest intersection of the world.  Unfortunately, neither of these movies truly tells of the real character, or life of Shibuya.  The modern reality is that a lot of people hate Shibuya because it is mainly a high school and college hang out.  However, Shibuya is definitely one of the places that tourists should visit in order to understand the various subcultures of Tokyo itself.

The first thing that must be done in Shibuya is to find an exit, or to find a meeting spot.  The Hachiko Exit and the Hachiko statue is the most famous meeting spot in Shibuya.  In October 2009, the movie Hachiko: A Dog’s Story, staring Richard Gere will be released, retelling the story of Hachiko. 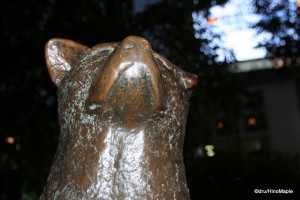 In 1924, Hachiko was brought to Tokyo by his owner, Hidesaburo Ueno, a professor in the agriculture department at the University of Tokyo. During his owner’s life Hachiko saw him off from the front door and greeted him at the end of the day at the nearby Shibuya Station. The pair continued their daily routine until May 1925, when Professor Ueno did not return on the usual train one evening. The professor had suffered a stroke at the university that day. He died and never returned to the train station where his friend was waiting.

Hachiko was given away after his master’s death, but he routinely escaped, showing up again and again at his old home. Eventually, Hachiko apparently realized that Professor Ueno no longer lived at the house. So he went to look for his master at the train station where he had accompanied him so many times before. Each day, Hachiko waited for Professor Ueno to return. And each day he did not see his friend among the commuters at the station.

The permanent fixture at the train station that was Hachiko attracted the attention of other commuters. Many of the people who frequented the Shibuya train station had seen Hachiko and Professor Ueno together each day. They brought Hachiko treats and food to nourish him during his wait.

This continued for 10 years, with Hachiko appearing only in the evening time, precisely when the train was due at the station.

Commemorating this real story, there is a statue of Hachiko just outside the train station.  If you want to see Hachiko himself, you can go to the National Science Museum of Japan in Ueno where his body was stuffed and put on display.  The other major meeting spot is at the West Bus Loop where there is a statue of the “Moyai”.  It is a gift from the island of Nijima that resembles the Moai of Easter Island.  This is generally an easier place to meet people, but it isn’t as convenient. 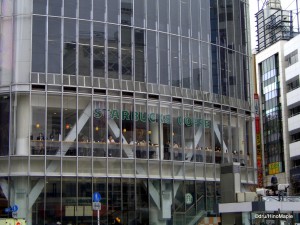 Tsutaya at Shibuya Crossin (Credit to a friend for the picture)

The Hachiko exit not only provides a quick look at the statue of Hachiko himself, but you can also board an old style train car, and see one of the most famous spots in Japan, Shibuya Crossing.  This is a typical scramble crossing, but what you don’t realize is how busy it is.  During the day, it is busy, but manageable.  At night, once the bars start opening up, the crossing becomes a chaotic sprint to get from A to B.  Many tourists will head through taking video of this crossing.  It’s not something people enjoy doing everyday.  One of the best vantage points of the crossing is at Starbucks, situated in the Tsutaya building on the North West corner of the intersection.  Do beware that this Starbucks is extremely popular and always crowded.  Finding a window seat can be a challenge in itself.  The good thing about this building is that it provides a great way to start exploring Shibuya.  Whichever way you go from here, you’ll see different sides of the city, and different cultures.

This is Part I of a III part series.  To continue reading about Shibuya, please continue on to Part II and Part III.