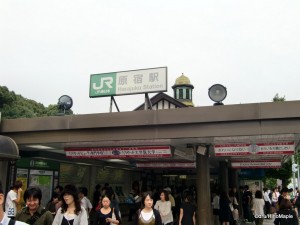 Harajuku is a place where you can see almost everything Tokyo has to offer in a small compact area.  You will be able to see the old Japan, namely Meji Jingu, one of the quietest and biggest shrines in Tokyo.  You can also see almost every type of fashion that Japanese boys and girls love.  You have the goth lolitas, cheap and trendy, hip hop, and expensive and glamorous.  Harajuku was popularized in Gwen Stefani’s “Love. Angel. Music. Baby.” album that was released in 2004.  This included four back up dancers of Japanese descent who dressed in a stylized Harajuku style.  While their style is far from what you’ll see in Harajuku itself, Harajuku’s fashion can easily be said to be the inspiration to the Harajuku Girls fashion.

If you head to Harajuku, I’d recommend going early and having a nice walk around Meiji Jingu.  It is a long walk from the station to the main temple, but it’s much better in the morning when it isn’t too hot.  The opposite can also be said about the temple in the winter time.  Going in the afternoon when it’s a little warmer might be better.  It’s best to avoid this temple in the rain.  I will write about Meiji Jingu in greater detail in a future post. 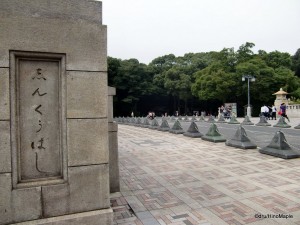 Funku Bridge (Where the goth lolitas used to hang out)

Most people who visit Harajuku go for one major reason.  They want to see all of the goth lolitas.  Several years ago, there were lots of people in Harajuku that dressed up in gothic style clothes, or even as lolitas.  It’s not uncommon to see people in maid outfits as well.  If you do a search for Japanese Punk, or Goth music, you can see a sampling of what some people wear in Harajuku.  By and far, the biggest name in Japanese Punk, although you could say glam rock or “visual-kei” is Gakt.  He is a very eccentric man who is a bit of a narcissist.  Unfortunately, I haven’t seen too many people dressed up in Harajuku.  I’m guessing that the police have cracked down and forced them to find a new place to hang out.  They may have also been pushed out by the tourists and their inability to just enjoy themselves.  I would imagine that there are still many of them hanging about around 5pm on weekdays, and in the afternoons on the weekend.  You may even be lucky to find a few people with signs promoting “Free Hugs”.  This was a popular thing to do for these kids a few years ago, and a few people still do it.  Today, I tend to notice more foreign people dressed up as goth lolitas rather than Japanese people.  If you are still interested in looking for these people, the best place to see them is on a small bridge leading to Meiji Jingu.  If you don’t see many people, aside from the tourists, you came at the wrong time, or the wrong day.  Diligence is very important if you must see them. 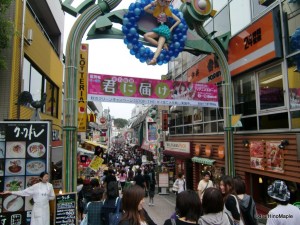 The most famous street in Harajuku is Takeshita Street.  It’s located in front of the Takeshita Exit from the station.  This street is about 400 metres and closed to all traffic.  At all times of the day, this street is crowded.  On weekends, you’ll be lucky to move up or down the street without breathing down someone’s neck.  It’s a very hectic street that isn’t for the light hearted.  However, this is the centre of the teenage fashion in Harajuku.  You’ll be able to see everything from maid outfits, to S&M style clothing, and even some cosplay outfits.  One of the more famous things to do is to line up and buy a crepe.  Being the teen heaven that it is, crepes are the perfect date food, or just a nice desert with friends.  It’s far from the French version of crepes.  These crepes are a little heavier, rolled with lots of cream and stuffed with a few pieces of fruit.  You can also buy savoury crepes with ham, lettuce, or even cheese.  If teen fashion isn’t really your thing, but finding a good deal is, look north along Takeshita Street and somewhere along the middle of the street, you’ll find Togo Shrine.  This shrine, in and of itself, isn’t that important.  However, if you are there on first Sunday of the month, it’s worth a short visit to see the flea market.  It is famously known for selling antique furniture, but you can also find a lot of interesting old things that aren’t priced at flea market prices.  Do feel free to bargain, but don’t expect them to do too much.

This is Part I of a II part series.  For more on Harajuku, continue reading Part II.