Roppongi is a somewhat seedy area of Tokyo that is extremely popular with foreigners. When I came to Japan, over 3 years ago, Roppongi was undergoing a revitalization of the neighbourhood. Roppoongi Hills had just opened and it was suddenly a place for the rich and famous to visit. However, there was still a large club district where there were dozens of clubs that attracted many foreigners. 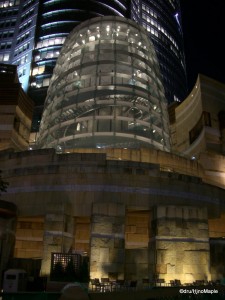 The first place people usually think of when they talk about shopping and Roppongi is Roppongi Hills. It is an upscale shopping mall and business complex that opened in 2003. It’s a large labyrinth of walkways, stairs, and shops. Finding your way around this shopping complex is difficult to say the least. Finding Roppongi Hills is also a challenge. Depending on which train you take, Roppongi Hills isn’t located near the station, so check the maps or you could easily get lost. However, if you take the correct train, you will be greeted by a large glass atrium that is very picturesque. The main attractions of the complex aren’t the upscale shops. Rather, the first is a large open terrace that goes up and down over the complex. It’s a nice place to see some interesting art and enjoy a nice stroll. There is a famous spider sculpture that can be eerie, yet it’s perfectly harmless. The roof will also allow you to enjoy the view of Tokyo Tower. If you head down from the terrace, you’ll reach a nice small garden with lots of plants and flowers. It’s a beautiful place to visit during the cherry blossom season. In the winter, there are hundreds of lights within the park and also throughout the complex. If you head up, way up, you will reach the Mori Art museum and a viewing centre. Beware though as you have to pay to see the view. The last attraction is the TV Asahi building. It houses a few displays of current TV shows airing in Japan as well as a gift corner. If you venture outside near the car park entrance, you might see some film crews with some Japanese talents.

If you walk around Roppongi Hills, you will have a nice time enjoying some of the new shops that have popped up in the area. They tend to be high priced boutiques that offer some nice goods that may not be easy to find anywhere else. You will also run into the Chinese embassy. It’s best to not head too far down that road as there really isn’t much to see. However, on the TV Asahi corner of the complex, you will be able to go to the Blueman Group theatre, a nice large Tsutaya bookstore, and Azabu-juban.  Do note that the Blueman Group will have their last Tokyo show on November 29, 2009.  Be sure to catch the show while you can.  Whether or not they’ll have a new show or what will replace them in that theatre remains to be seen. 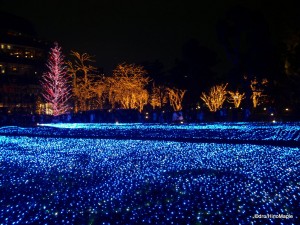 In 2007, Roppongi Hills had some competition. Roppongi Hills was built by Mori Building, one of the largest development companies in Japan. Their arch rivals, Mitsui Fudosan decided to literally go across the station, buy a disused military base and build a “cousin” complex to Roppongi Hills called Tokyo Midtown. It was an ingenious idea as the area was already growing rapidly, and demand for high end shops were growing. It was also a very risky adventure as it could easily flop. Thankfully, things went well, and both complexes are thriving. The main theme of Tokyo Midtown was to promote lesser known high end brands. Tokyo Midtown also has a large underground eating area and prepared foods section. You can buy almost anything that you could imagine. The main attraction for the budget conscious is the large garden behind the main entrance. The garden measures a 40,000 sq metre garden that is wonderful to just wander around. While it’s more of a park, it’s still very beautiful and full of couples during December as they have a huge light display. In a corner of the garden, and underground, is the Suntory Museum of Art. It is a direct competitor to the Mori Art Museum, and in many cases, people say its better. Lastly, Tokyo Midtown is also the site of the Ritz Carlton Tokyo. It’s the first one in Tokyo, but probably not too interesting for most people. 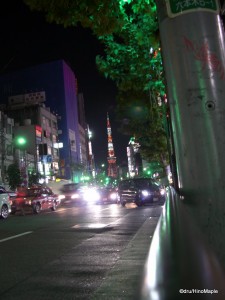 Looking to Tokyo Tower from Roppongi

I mentioned, at the beginning of this post, that Roppongi has undergone a transformation from a club district to a high end shopping district. While that is true for the most part, there is still a sizable area for clubbing. The original meeting spot of Roppongi was at the Almond café. It is on the corner of Roppongi-dori and Gaien Higashi-dori. It is the pink and white shop. Unfortunately, due to high rents, this café has recently relocated. However, if you walk down the street towards Tokyo Tower, you will head towards the entertainment district of Roppongi. Unfortunately, things are quickly getting quiet as many clubs are closing due to the revitalization efforts. If you want to see this area, you had better do it quickly. I’ve heard that some of the clubs are moving towards Azabu, but I cannot confirm this. 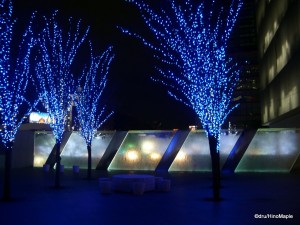 Outside TV Asahi in Roppongi Hills

Roppongi is, without a doubt an interesting place to visit. Unfortunately, it is no longer a unique place. Aoyama and Omotesando both have their own versions of Roppongi Hills, and even Shanghai’s World Financial Centre (developed by Mori Building) will be similar. It isn’t a new thing. It’s essentially mixed use “habitat” where you can work, live, and play. It’s a wonderful place to go on a date, but remember that it’s still somewhat expensive.