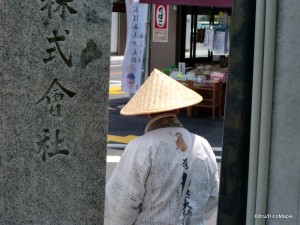 For the first full day of my motorcycle adventure, I travelled down from Tokushima to Kochi.  It was over 200kms for my first day of riding.  The first part was very boring.  When you drive in Japan, the cities are places you want to skip.  There isn’t anything to really see.  You just go from light to light seeing nothing new.  It took about an hour to get outside of Tokushima and its surrounding suburbs.  Once out of the city, things got smaller, yet more scenic.  Things didn’t become interesting until I reached the small town of Hiwasa.  This is a very small town located about two hours along route 55.  It is so small that you will be in and out of this town in less than 10 minutes.  There are only a few things to do in this town.  The main point of interest is to visit Yakuouji Temple.  This is built right next to the highway, and up a mountain.  There are many steep steps to reach the temple.  I found it to be an interesting temple for its location and how it was built, but the art and basic design wasn’t any different than any other temple in Japan.  There is also a small castle in this town and a few beaches where you can relax and enjoy yourself.  It is a good place to stretch your legs a bit if you are travelling this way.

At an unknown dam along route 55.

From Hiwasa, I would recommend leaving route 55 and heading down route 147.  This is a very small road, and the entrance is very easy to miss.  It is just past the temple, which can’t be missed.  This road follows the coastline more than route 55.  There are several mountains along this part of the coast making road construction difficult.  Route 55 heads to the north side of these mountains making it easier to drive.  However, the views from route 147 are wonderful and you’ll be graced with various types of corners.  This is more for drivers to enjoy.  There are also several different lookouts, but after one or two, they tend to look the same.  Heading further along route 55, there isn’t much to see.  However, there are many beaches, dams, and other things to see.  If you are travelling along anywhere in Japan, there is one easy way to know if there is something interesting to see.  The government tries to help local communities attract more tourists by promoting local attractions.  On the road, you will see a large white sign with blue lettering.  This is almost always something of interest.  Unfortunately, it isn’t always really interesting, so if you are driving around in Japan, beware that some sites may be worth a pass. 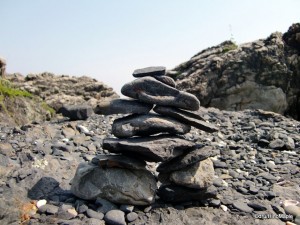 My Inukshuk at Muroto.

The main tourist attraction along route 55 is Muroto.  It is the southern most point of the highway.  Shikoku has two capes in the south.  Muroto is the western one.  It is very easy to drive in and out of Muroto.  There isn’t much to this cape.  However, it is a great place to stop and spend at least an hour.  There are a few places to take pictures, and the seawater is extremely clear.  The first thing you will see, coming from Tokushima, is a giant statue of a Buddhist monk.  Once you pass this large Buddhist monk, you will soon reach the tip of the cape.  There are a few places to park, but once you park, it’s a short two minute hike to the waterfront.  The waterfront if full of rocks that can make it difficult to walk around.  However, because of the remoteness of the cape, it is extremely peaceful.  There are only a handful of people around at any time.  I would highly recommend a dip in the water, but beware that you’ll need your bathing suit at the cape.  There are too many people around to go skinny dipping.  If you have time, you can also head up the mountain at the cape and take a look at the lighthouse.  It is the largest lighthouse in Japan and it can be seen from over 50kms away.  The views from the lighthouse must also be very nice.

After passing the cape, there isn’t too much to see.  The road follows the entire coastline up to Kochi.  The coast is very beautiful and worth the drive, however, there isn’t too much to do along this part of the road.  If you have a chance to rent a car and travel down this way, I highly recommend that you should do it.  You will have a wonderful day trip.