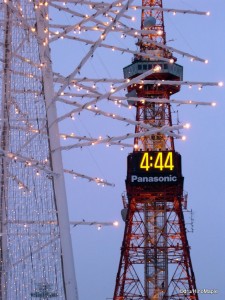 Note: Any and all descriptions of sculptures and activities are for 2009.  The sculptures are guaranteed to change, and some of the activities may also change. It’s best to check just prior to going.

Note:  The 2012 Snow Festival was held from February 6~12.  For the latest information, please visit the official website for future snow festival dates.

Every year in February, Sapporo holds its biggest festival.  The Snow Festival is by far the most famous and popular festival in Japan, during the winter.  In January, the Japanese Self Defence Force trucks in hundreds of tons of snow that will be used in snow sculptures that range in size of a one metre to the size of a small building.  All of the sculptures are located along all 12 blocks of Odori Park, which is where the main action takes place.  There is a secondary site located at Sapporo Dome.  This site is geared towards families and having fun.  A third unofficial site is located in Susukino.  This is actually the Susukino Ice Festival, and as the name implies, this festival contains nothing but ice sculptures. 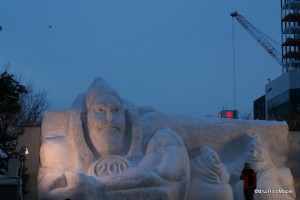 The traditional starting point of the Sapporo Snow Festival would be the Sapporo TV Tower located at 1-chome of Odori Park.  Heading up the Sapporo TV Tower is something I would recommend, however, I didn’t go up as it was too busy.  From the observation deck, you’ll be granted with a beautiful view of the entire festival.  If you are in the mood, I’d also recommend a quick pint at the Otaru Beer restaurant located on the ground floor of the TV Tower.  1-chome is also the site of a small skating rink.  It’s reminiscent of Rockefeller Centre in New York, only the surrounding buildings aren’t as tall.  In 2009, they had a sculpture of Tsuyoink, which means strong ink.  It was obviously sponsored by Epson, as it’s their personal mascot.  1-chome is also the location of a small stage where they have a few concerts and lots of information for everyone.  This was one of the most crowded areas as well. 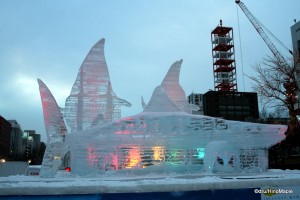 Upon entering 2-chome, I was graced with the sight of some beautiful ice sculptures.  This year, they had various tropical sea animals swimming.  They also had a sculpture to promote the Nippon Ham Fighters; Sapporo’s very own Japanese baseball team.  This section of the festival wasn’t very good.  It was very difficult to see the sculpture properly, and large ice sculptures didn’t come off well when they are as detailed as this one.  The smaller, simpler sculptures worked out better.  In my own opinion, it’s not worth the time and effort as you can’t get close enough to see the actual detail of the sculptures. 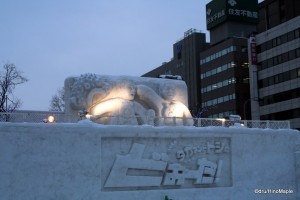 3-chome provided another dynamic to the festival.  In 3-chome, the festival had two different sculptures.  The first is a small shrine and maze for good luck.  They had a few special items if you walked the maze.  You could get a picture taken with Hiyokochan, a popular character.  I didn’t know this character at all, but they said they are popular.  The shrine is also a major place for people to pray and to bring some good luck to the festival.  Unfortunately, this attraction was closed when I visited.  The other attraction to see was the TAKA and TOSHI slide.  TAKA and TOSHI are a popular comedy duo in Japan who comes from Hokkaido.  This comedy duo designed this slide.  It was a nice and I wish I could try it, but alas, it was closed when I went. 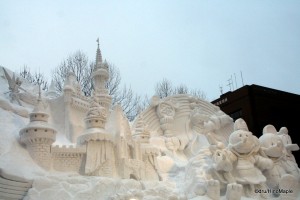 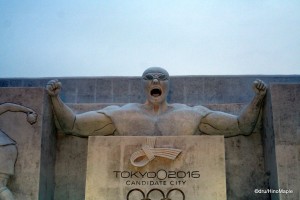 4-chome had another set of commercialized sculptures.  Unlike 1-chome, these were more tasteful and had an actual meaning.  The first was “~Dreams~”.  This huge sculpture was to celebrate the 25th anniversary of the opening of Tokyo Disneyland.  It featured all of the major Disney characters.  Mickey, Minnie, and even Tinkerbelle were featured.  They also had a plane that had working lights to provide an interesting dynamic to the sculpture.  On the other side of the block was a huge sculpture to promote the possible Tokyo Olympics in 2016.  It featured 3 of Japan’s most recent, and famous, gold medalists from the 2008 Beijing Olympics.  Kousuke Kitajima was the prominent figure.  He won a lot of swimming medals and was pictured in his victory pose after winning gold.  On either side of him were Yukiko Ueno and Masae Ueno.  Yukiko was the pitcher and captain of the Japanese women’s softball team, and Masae was a Judo gold medalist.  Tokyo is currently in the running for the 2016 Olympics.  The other candidates include Chicago, USA; Madrid, Spain; and Rio de Janeiro, Brazil.  Currently, Tokyo isn’t doing well, but they do have a chance.