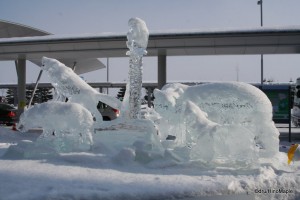 Asahikawa is a major city located in the middle of Hokkaido.  It is also known as the coldest city in Japan.  The city is served by a small airport that has daily flights to various major cities in Japan and special flights to Korea from time to time.  The easiest way to get around is to rent a car, or by bus.  The trains run roughly every 30 minutes making it difficult to plan anything.  The city is also very easy to navigate, so driving shouldn’t be a major problem for anyone, even a foreigner. 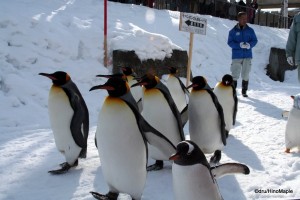 There are three major things to see or do in Asahikawa.  Asahiyama Zoo is the second busiest zoo in Japan, after Ueno Zoo in Tokyo.  It is well known in the summer for its bird display and various exotic animals.  They have many large cats and monkeys on display, but in the winter months, they are fairly inactive.  The main attraction in the winter is the sea animals.  The main attraction is the penguins.  There is a large pavilion where you can walk within the penguin pool.  It’s very nice to watch penguins flying overhead.  When you watch them swim from above, it looks like swimming, but when you are below them, it appears as if they are flying.  It’s quite beautiful.  The pavilion is also based outside where you can get very close to the penguins.  It’s possible to touch them, but you aren’t allowed.  In winter, you can also watch a “Penguin March”.  They take a nice slow walk around the zoo, but the main feature of the walk is that you can see the penguins without any glass in front of you.  You can almost touch the penguins, but it’s not allowed, of course.  The Penguin March itself is quite simple and boring as they have King Penguins, but from time to time, some Gentoo Penguins also join the walk.  These are much smaller, but more active, providing a better show for the audience.  While the penguins are the main attraction the second biggest attraction during the winter months are the polar bears. 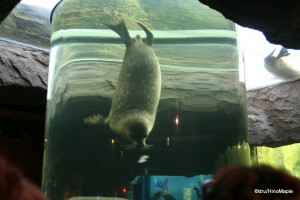 These majestic bears tend to just sleep during the day, but they have a few unique attractions.  The first is an observation bubble.  You can pop your head up from a tunnel and see the polar bears resting.  It’s to simulate the feelings a seal would have if it were to be attacked by a polar bear.  The other attraction is the pool where the bears play around.  In the summer months, the zookeepers tend to add fruit encased in ice as a special treat.  Watching the bears can be fun, but it is very busy, and timing is everything.  The last attraction is the Leopard Seal pavilion.  Its main feature is a glass tube where the seals can swim up and down.  It allows you to enjoy a full 360 degree view of the leopard seal swimming.  It is a very cool sight to see and highly recommended. 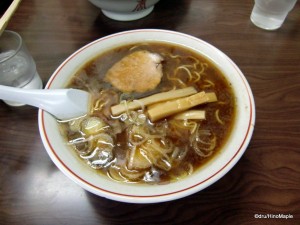 The second thing to do in Asahikawa is to eat ramen.  Asahikawa is famous, like most places in Japan, for its ramen.  The ramen itself isn’t that special, but it does have a slightly distinct flavour.  It has a stronger fish taste to it, in general.  Myself, I can’t really tell the difference, but it is a very nice lunch if you are outside all day in the freezing cold.  The last thing to do in Asahikawa is to visit the Otokoyama sake factory.  It is one of Hokkaido’s most famous brands and it tastes wonderful.  It’s a nice way to end your day and pick up a few gifts for some friends. 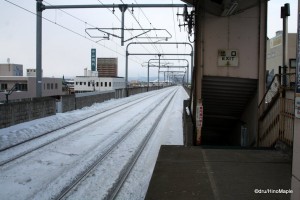 A small train station close to Asahikawa Station. Only one car trains every 30 minutes.

If you are intending to go to Hokkaido for a vacation, Asahikawa is a wonderful place to visit.  It isn’t the best place as a base for your trip, but it can be a base for part of your trip.  In the winter, it’s good for a few days of skiing, but in reality, it’s not close enough to any famous ski hills.  In the summer, it’s good because it’s very close to Furano.  However, it is better to stay in Sapporo as Asahikawa can easily be finished as a single day trip.  As I have said in the past,  Hokkaido is a wonderful place to visit, and I hope you can enjoy a trip there someday soon.