This is Part VI of a multi-part series chronicling my motorcycle adventure from Tokyo to Sapporo and back again.

Background:  In 2007, I had finally gotten my Japanese driver’s license and a motorcycle.  I had been an avid motorcycle rider in Canada before I came to Japan, so after 2 years of no riding, I finally bought a motorcycle and decided to go on a big adventure.  I went from Tokyo to Sapporo by motorcycle and ferry. It was an adventure to say the least. 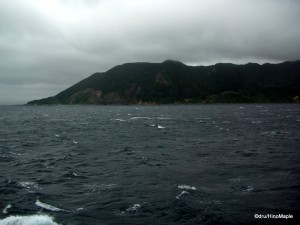 The Coast Near Hakodate

The last day in Hokkaido and the poor weather had returned.  I had a two day journey that would take me straight back into Tokyo.  I had only one morning to get from Sapporo to Hakodate, about 270 km.  While I normally wouldn’t consider this to be tough, I originally planned to take the low roads and enjoy the vast scenery that Hokkaido has to offer.  Instead, with my bike troubles in the back of my mind, I ended up racing in the very early morning from Sapporo all the way to Hakodate along the Hokkaido Expressway.  It was very cold in the morning, but at least it wasn’t raining.  By the time I reached the 1/3 mark, it started to rain again.  In Japan, they call me an ame-otoko, or rainman.  Whenever an ame-otoko travels, it rains wherever he goes.  I certainly felt like this was true for me.  The expressway itself is much better than the Tohoku Expressway.  There is a section just past Muroran where you start to enter a narrow section of the island.  It is a very windy place and there are many windmills making the scenery very picturesque.  On my way to Chitose, I mainly took the low roads.  I felt the sea, and saw a little of it, but I never really saw everything.  The highway is located a little ways up the mountain range and every so often, you can see the entire curve of the coast.  It was very beautiful, but unfortunately, I would have preferred to have a car at that moment.  I kept dreaming of a car with a rooftop and a strong heater. 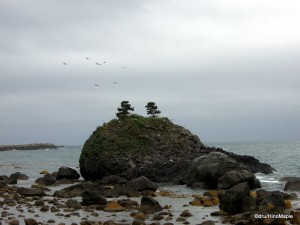 The beautiful coastline near Oma

Once I reached Hakodate, I had to find my way to the station and ferry terminal.  Because of my horrible sense of direction, I almost got lost, but I figured things out.  Hakodate really isn’t a bad place.  There is a nice little hill near the city centre that has a nice lookout, and the fish market is one of the best in Japan.  Do note that almost every major coastal city in Hokkaido has a “famous” fish market.  In order to warm up from the cold rain, I decided to get a nice hot bowl of ramen.  It did a great job of warming me up and I was ready for the ferry ride back to Honshu.  If you do have the chance, Hakodate would be a great place to spend a night and enjoy a lot of sightseeing.  I’m sure there are a lot of great places to see.  While Hakodate isn’t the ideal location, there is an underground train station in the Seikan Tunnel on the Aomori side.  The Seikan Tunnel is currently the longest undersea tunnel in the world and the deepest.  There are two stations within the tunnel itself that provides emergency access.  One of the stations doubles as a museum to the building of this tunnel.  There are three tours available everyday.  However, you can only choose one.  One starts in Hakodate and ends in Aomori.  One does the reverse, and one goes from Hakodate, to the station/museum, and back again.  If you are a trainspotter, this might be a lot of fun for you.  If you have a lot of free time, this might also be fun. 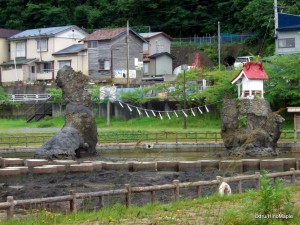 A nice park near Oma

Crossing back to Oma was a little different this time.  I knew the crossing, and the seas were rougher than last time.  It was raining and I spent my time drying my clothes.  I wish I was better prepared for all the rain.  The next time I take a long trip, I’ll try to prepare a lot more.  Once in Oma, the sun blocked by the clouds but it wasn’t really raining.  I only had to deal with all the mist from the cars and such.  I made a quick trip from Oma to Hachinohe, which was my final destination of the day.  The trip was cold, wet, and dark.  I had a bit of an adventure about 30km from Hachinohe.  I missed a road sign, or it didn’t exist, and I went in the wrong direction for about 7 km.  I had to turn around and find my way in the middle of nowhere.  Thankfully there was no one around to help me, whatsoever.  To say the least, I was a little scared, but I was happy that I turned around instead of getting completely lost.  It wouldn’t be the last time I got lost either.  By the time I entered the city limits of Hachinohe, I got lost again.  I ended up wandering around the city for about 1 hour before I found the main station.  I found the station and had to decide on where to sleep for the night.  I found a place in the downtown area and headed for it.  Unfortunately, the sign for the hotel was so small, I missed it three times.  I ended up going to a convenience store and asking for help.  After about 10 minutes a very nice man decided to drive ahead of me and show me the way.  I was so happy for the help.  After checking in, I had a few hours to dry my clothes and enjoy the city. 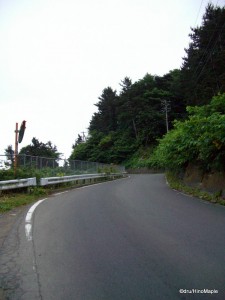 The road between Misawa and Mutsu

Hachinohe itself isn’t as bad as my personal experience.  It has all the amenities that you could need and everything is centrally located within the city centre.  They were also preparing for the summer festival.  I could hear taiko drums beating for a good portion of the night.  Aside from the festivals, I doubt that there is anything to really do in Hachinohe.  I’d be better off going straight through Hachinohe, but unfortunately, I needed a place to sleep unless I rode all night to Tokyo.