This is Part V of a multi-part series chronicling my motorcycle adventure from Tokyo to Sapporo and back again. 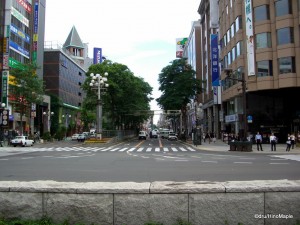 Sapporo is a beautiful city.  It’s the biggest city in Hokkaido, but it doesn’t feel like such a big city.  It’s quite similar to Vancouver.  The streets tend to be wider than average Japanese cities, and the streets are all numbered.  While the numbering is difficult to learn, it should get easier if you spend enough time in Sapporo.  In Sapporo, addresses go by the block number and compass orientation, for example, 2N 3E and so on.  It’s a little confusing at first, and since I only spent about a day in total in Sapporo,  I didn’t get used to it at all. My initial impression would be that Sapporo would be very easy to navigate, but boy was I wrong.  Going from Chitose to Sapporo wasn’t difficult.  It was navigating Sapporo itself and finding my hotel that was a pain.  I found Sapporo station relatively easily, but finding my bearings to get to my hotel itself was difficult.  I ended up finding a convenience store to get directions.  Convenience stores are my second choice for finding directions.  They are everywhere in Japan.  There was one problem.  After getting directions, I got lost again, and asked a cop for directions again when I was close to the hotel.  Once there, I parked my bike and wouldn’t touch it again for a couple days. 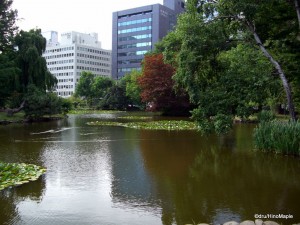 The park at the old government buildings

Getting to Sapporo is a lot easier if you are taking a train.  The train station is not the centre of the town, but it is a major centre.  Most of the city’s heart is located on the South side of the station.  I took a look at the North, but it looked similar to any other business district of Japan, so I headed south.  The first thing you will see is a nice open space with a few sculptures.  The station itself is quite beautiful.  It is very modern and suits the city’s spirit.  It is a large brown and gray building with a large blue clock in the middle.  There is shopping in every direction from the main entrance.  If you go without enough clothes, there are many shops selling warm clothing.  If you continue to look south, you will see many tree lined streets.  It’s quite beautiful, and it might be even better in the snow.  Heading south, you’ll run into the former Hokkaido Government buildings.  It’s a wonderful park to visit with lots of green trees and a couple large ponds.  I recommend taking a nice walk from Sapporo station and stopping at this site on your way to Odori Park. 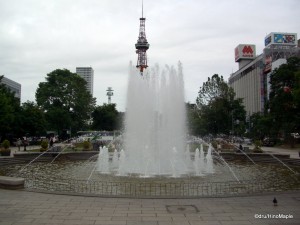 One of many fountains in Odori Park

By far, the most popular place to visit in Sapporo is Odori Park.  It’s the most famous park in Sapporo.  It is 1.5 km long and spans 13 blocks.  It is also the centre of Sapporo.  On one end is Sapporo TV Tower and on the other end is the Sapporo City Archive Museum.  In the February, the Yuki-matsuri (Snow Festival) is held, and in the summer, several portables are built to create a large beer garden that spans a couple blocks.  The Yuki-matsuri is the most famous event in Sapporo.  I have seen pictures and it is quite beautiful.  I will be heading there in February and will write about it in the future.  I was a little early to attend the beer gardens, but I’m sure it would be a little overpriced, but wonderful.  Each major Japanese beer label was in the process of building the gardens, so having your choice of beer wouldn’t be difficult.  It looked much better than the Tokyo beer gardens because they are all in one place, and it’s easy to choose your favourite one.  There is only one thing to know about Odori Park.  It’s very boring if there is nothing happening, unless you are a kid.  There are a few places where children can play all day and never get tired.
The final area of Sapporo that is of interest is Susukino.  It’s regarded as the Kabukicho of Sapporo, a red light district.  In this regard, it is considered a place to get sex, but in reality, it isn’t that bad.  Like Kabukicho, it’s a reputation that is hard to shake.  Being a “red light district”, it has the most restaurants in Sapporo.  There is a famous ramen street where you can get Sapporo ramen.  There are also many izakayas and countless bars.  If you are looking for someplace to get a good cheap meal, this is the place.  It is also one of the main locations for the Yuki-matsuri.  I can’t really say too much about this place as I didn’t explore too much.  If you do go, be a little more careful as things could be a little dangerous, in terms of Japanese danger. 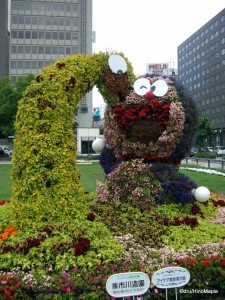 Doraemon in Odori Park. If I was one week earlier, I would've seen him in full bloom.

Sapporo is a wonderful place to visit, and I definitely want to go again and again.  If you can visit Sapporo directly, I do recommend it.  If you are spending a couple weeks in Japan, and can afford the plane ticket, it’s worth it.  If you have a JR Pass, I don’t recommend it because there are no Shinkansen trains that go to Sapporo.  It takes too much time to get there by train at the moment.  Hokkaido itself is quite easy to explore by train, so if you fly to Sapporo and have a JR Hokkaido pass, you can enjoy yourself for a full week or two and still have things to do.

This is the main article on Sapporo from 2009.  To read an update on what is new in Sapporo, please visit Sapporo – Redux.