This is Part III of a multi-part series chronicling my motorcycle adventure from Tokyo to Sapporo and back again.

Background: In 2007, I had finally gotten my Japanese driver’s license and a motorcycle.  I had been an avid motorcycle rider in Canada before I came to Japan, so after 2 years of no riding, I finally bought a motorcycle and decided to go on a big adventure.  I went from Tokyo to Sapporo by motorcycle and ferry.  It was an adventure to say the least. 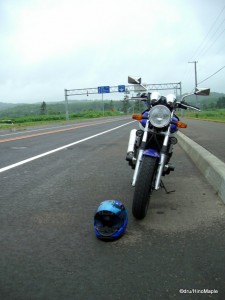 Parked and waiting for help

Hakodate is a medium sized city that is well known in Japan.  It know as having the best night view in Japan.  There is a small mountain in the city, where at night, you can see the entire peninsula lit up by the city lights.  I wish I spent a few days exploring the area, but my final destination of the night was Chitose.  I quickly found my bearings and got out of the city.  I took an unexpected detour to look at some of the countryside which was beautiful.  I was prepared for a nice quick ride into Chitose where I would spend the night, but my luck had completely run out.  About a few hours into the ride, I was starting to get miserable.  It was cold and the rain kept was coming on and off.  I was wet, cold, and trying to make it to my final destination.  To make matters worse, I went 15 km in the wrong direction at one point and this is where things went for worse to horribly bad. I had some engine troubles.  I had some bad oil in my engine and my oil light was turning on and off.  I had oil, but something was seriously wrong.  I flagged down a construction vehicle and got some help.  He offered to go and get some oil for me.  He was very nice, but I wished he took me with him to get some oil because I had to wait in a cold light rain until he returned.  After waiting for 30 minutes, he returned.  He brought some oil for me and pointed me in the right direction for the expressway.  I didn’t have time to find my way on the low roads, and wanted to get to Chitose ASAP.  The next 4 hours was HELL.  I had to stop about 6 or 7 times as my oil light kept coming on.  If I stopped, the light would eventually turn off.  To make matters worse, the light rain turned into regular rain and I was cold and drenched.  The temperature was close to 14C and on a bike, at around 80kph, it felt like 7C.  I think I almost became hypothermic.  I couldn’t stop shaking, and I wasn’t thinking straight.  To say the least, it was very dangerous and not very smart, but when you are miserable and cold, you don’t really think. 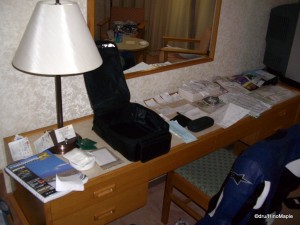 I kept things very easy on the bike, but didn’t arrive into Chitose until after 9pm.  I went to the very first hotel I could find, Hotel Nikko.  It is a very expensive hotel in Japan but I didn’t know it at the time.  The front desk guy gave me a very nice discount on a regular room rate, and I was lucky that they had a room.  They only had 5 rooms left for that night.  I spent the night researching for a bike shop so I could get my bike checked out while drying my clothes.  It was here that I decided to cancel all of my ambitious plans to tour across Hokkaido and stay in Sapporo instead.  I didn’t even want to ride at all. 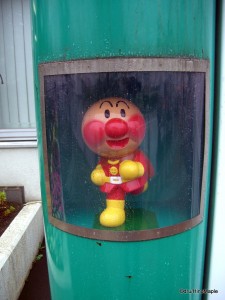 There wasn't much to see in Chitose, but this school had some nice characters.

The next morning, I was extremely emotionally stressed.  It was still raining a little.  I decided to try a bike shop that I found the night before right away so I could get things checked out.  Unfortunately, it was closed.  It said it opened at noon, and it was early, so I went to get coffee and return when they opened.  At noon, the shop was still closed and there was no one around.  I tried to call the number, but no answer.  I ended up searching for another bike shop.  The second shop was really nice.  They were preparing for some kind of race, and they were really busy.  The owner looked at my bike, started it up, and said it was probably bad oil.  He said he could change the oil and take a quick look, but I should have it completely checked out, just in case.  I thought it would be “okay” to wait until I returned home.  It would take a while before he could really check on it, so I ended up going to an outlet mall for some shopping. 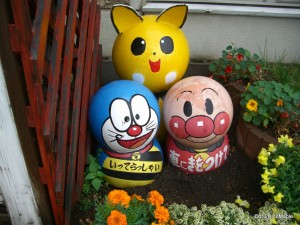 Chitose itself is a very nice suburban city.  It’s located roughly an hour or so outside of Sapporo.  There are all the basic amenities that one needs.  It’s not a great place, and there is nothing special in the city.  The only special thing is an outlet mall that caters to those living in Sapporo.  Japanese people LOVE outlet malls, so there are dozens of them across Japan.  While the city is nice, it’s definitely not a place to stay.  You can visit the outlet mall if you’d like, but it’s no different than any other outlet mall in Japan.