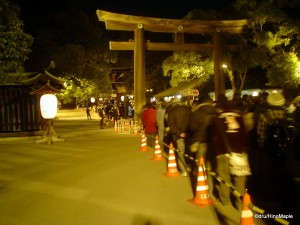 It is now 2009, in Tokyo.  This is the first year of my blog,  but my 4th New Year in Japan.  New Year’s in Japan is a very different experience compared to Canada.  I’d say that it’s much more boring.  Of course, if you have a lot of foreigner friends, and they happen to be in Japan at the same time, it can be fun, but generally, there isn’t much to see or do.  I recommend avoiding this time if you are planning to visit Japan.  There are only a few exceptions. 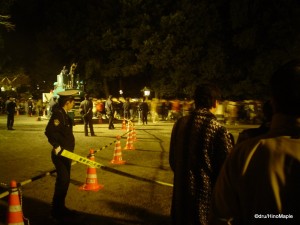 In Japan, you generally have 5 days of holidays before you head back to work.  This season, we’ll have 6 days, due to the orientation of the week.  Many people will actually have 9 days as Monday is also a holiday.  Traditionally, the end of the year is spent doing many things.  It begins on December first.  Many people go to bonenkai parties.  These are essentially the same as any other Year End Party or Christmas Party, however, in Japan, these are still a little different.  Some people will go to a party every week.  Others, just one.  The most I heard was someone had to go to a party almost everyday before the holidays.  These Year End Parties aren’t easy either.  While it may sound easy, you have to remember that you are drinking until you nearly throw-up, and quite often you go beyond that.  You also have to function normally at work the next day as well.  While you may think that these parties can be “skipped”, many times, people go to parties that their clients are holding.  If they don’t go to these parties, they could be seen as not being a team player, or not caring for their own clients. 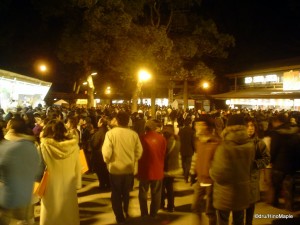 The actual holidays start around December 30th.  The end of the year is generally a very busy time to take a train or plane out of Japan.  If you plan to go from Tokyo to Osaka, or Hokkaido, and vice versa, you will have a very tough time.  Prices are increased for planes, and chances of getting a spot on a Shinkansen could be impossible.   Everyone usually goes home at least once during the holidays.  The best people go home for the entire holiday, whether they want to or not.  The other major thing to do for the last two days of the year is to clean up.  Unlike North America, Japanese people do their “Spring Cleaning” at the end of the year.  In this time, people tend to just throw away old junk and clean behind the shelves.  Depending on the house, it could take a day, or it could take five days. 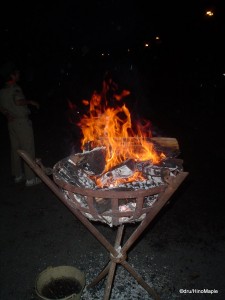 On New Year’s Eve, there are no parties.  If you are a foreigner, you can always have your own party, but if you are planning to go out, good luck.  Most shops close early, and almost nothing is open after 9 pm.   There is only one interesting thing to do, if it’s your first time in Japan.  Go to a temple or shrine.  Meiji Jingu is the most famous in the West.  Thousands of people go throughout the night and literally throw money towards the shrine.  Dozens of guards are lined up and the police work all night helping you be orderly.  There are other temples and shrines to visit, but I have never been to any of the major ones.  Visiting a local shrine is much easier, but not as exciting.  It does provide a very interesting insight into what could be normal for other Japanese people. 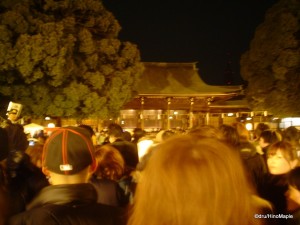 On January 1st, there is absolutely nothing to do.  Some major electronics shops and restaurants may open, but generally, just stay home.  After, you can enjoy the shopping bonanza.  The first two days after the new year is Japan’s biggest sale time.  It’s akin to Black Friday in America and Boxing Day in Canada.  The morning of January 2nd, there are usually lines of people waiting to enter every shop.  Deals can be had for almost everything.  If you are strong, and brave, you can easily enjoy the shopping and the hunt for bargains.  If not, try to go a week later.  Sales tend to last for the entire month, but pickings can be slim after the first week.  The first day is the best in terms of selection, and obviously things get worse from there.  There is another interesting thing you can buy.  “Fukubukuro”.  These are “lucky bags”.  Hundreds, if not thousands of people will line up  at various shops to buy these lucky backs.  To buy one of these bags, you can spend as little as 5000 yen and as much as 500,000 yen.  You will often get double the price you paid, but there is one catch.  You don’t know what you are getting.  They just sell sealed bags stuffed with goods and you have to hope you get something nice.  Recently, there have been more and more bags where you can see what is inside.  If you are worried about size, they usually have signs that say who they are for.  In most cases, only certain people buy them.  Most people don’t.

Once January 4th comes around, things return to normal, relatively, and people go back to work and enjoy working hard.

I hope you all have a safe and Happy New Year.

Happy New Year (2009) is part of a series of posts each year talking about the year end holiday season in Japan.  To read more, please venture to the other posts below: