This is Part II of a two part series.  Please see Part I for the beginning of this post. 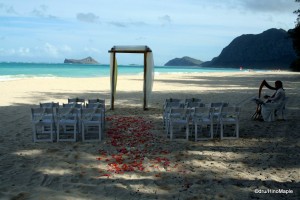 The next day, I had to attend my friend’s wedding.  It was an all day affair.  I did wake up early and had a nice run along the beach.  Waikiki’s beach is very nice, but the path for runners is very short.  You are better to go elsewhere, but I wanted a beach that was close to my hotel.  The morning is also a nice time to visit as there aren’t too many people there.  By the afternoon, I’m sure it was busy.  The beach itself is also nice, but a little rocky compared to other natural beaches on Oahu.  I saw many people swimming and surfing in the area.  The wedding I attended was a beach wedding.  The wedding party was about 20 people and we all sat on the beach.  We went to Waimanalo Bay, which is about 1 hour from Waikiki.  It’s a wonderful place with very few people.  There were a few people who looked at us in envy, but it was generally our own private beach.  The women had a lot of problems as they wore heels.  Heels and sand do not mix.  Most of them changed to flip flops or just went barefoot.  The beach was beautiful with nearly white sand and a turquoise surf.  It wasn’t too windy either.  Just perfect.  We got lucky.  After the ceremony, we had a break time to relax before we had dinner.  Dinner that night was at Roy’s.  A very nice upscale restaurant, but not as good as Orchids.  The food wasn’t as good either, but there was a lot of choice.  We were all stuffed. 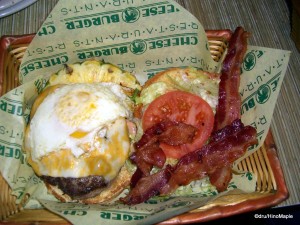 On my third day in Honolulu, I headed to the Premium Outlets.  It’s a major chain of outlet shops that has several outlets in Japan as well.  The only difference is that Honolulu’s Premium Outlets is very small, but they have better discounts.  Most shops had 20-50% off the lowest ticketed price.  Very good deals to be had.  I do recommend heading to this outlet shop if you have a car and the time.  For lunch, I headed to a famous Cheeseburger restaurant.  Cheeseburger in Paradise is relatively famous and they offer HUGE burgers.  They are so huge, that you don’t need fries.  However, who can eat a burger without fries? 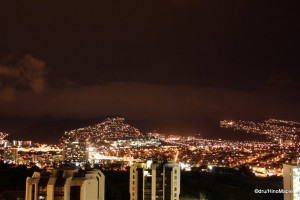 View from my hotel at night

The fourth, and essentially last, day in Honolulu, was not so fun.  I woke up to rain.  It was pouring out.  I cancelled my morning plans.  I was going to enjoy the beach, but obviously that was out of the question now.  Instead,  I headed to Wallmart with some friends and found some cheap things.  Nothing too special.  If you have time, it’s nice to go there.  After that, I headed to Ala Moana again for a final round of shopping.  Nothing bought, but I enjoyed browsing all of the shops.  After shopping, I headed back to the hotel to pack as I would have a very eventful evening.  After packing all of my things, I headed back to meet my friends for drinks.  We met up and started drinking in one of the rooms.  After, we headed out to a bar for more.  We ate and drank and had a great time.  By the end of it, we were kicked out as they place had closed and we moved the party to the beach.  In our drunken state, many people started to jump into the ocean for a night swim.  Nothing too dangerous.  Just up to the chest.  I might have gone in if asked, but I had no option.  My friends picked me up and tossed me into the ocean.  I was soaked from head to toe.  I jumped out of the water, stripped down to my jeans and jumped back in.  It was a fun night of swimming that lasted about an hour or so.  I couldn’t quite remember as I was quite drunk. 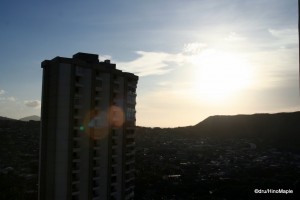 Sunrise with Diamondhead from my hotel

The next morning, I was awoken to the sound of a phone.  I had missed my first bus to the airport.  i had only 5 hours of sleep, my alarm was broken by the sea, and I had about 30 minutes to change, pack, and go.  I didn’t even have time to shower.  Thankfully, I finished packing the night before, so all I had to do was put a few things away and off I was to get picked up.  Needless to say, the flight back wasn’t so good, but I did make my flight and I did arrive in Tokyo as expected.  However, when rushing, it’s best to take a quick breather before heading through security.  I spent a lot of time there as I made mistake after mistake.