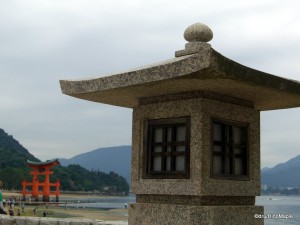 In October of 2007, I made my second trip to Hiroshima.  A city infamously known as the first city to be bombed by an atomic bomb, and famously known as the headquarters of Mazda.  While Hiroshima is a nice city, it shouldn’t be considered high on a list of cities to visit.  While it’s a mandatory place to educate children, it’s a pretty depressing city, overall.  The amount of memorials to remember the dead lives is extremely hard to take in.  For my second trip, I decided not to visit the depressing areas, but to go to Miyajima instead.  Miyajima is also one of the Top 3 Views of Japan, and between Matsushima and Miyajima, Miyajima is hands down the best.  As I approached the island from the ferry, you can feel a special energy that isn’t as common in other tourist sites in Japan. 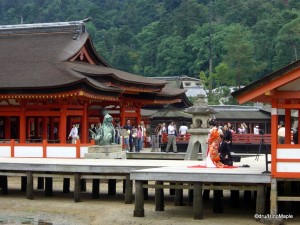 Miyajima itself is an island located off the coast of Hiroshima.  It’s about 1 hour from Hiroshima station, and a quick 15 minute ferry to the island.  As you approach the island, you are graced with the view of the “Torii” of Itsukushima Jinja.  Torii is a gate that marks the entrance of a temple.  They can be as small as a single person, or as large as a building itself.  Once onto the island, I made my way to the shrine (Itsukushima Jinja).  The route to the shrine was full of people, and there were a lot of deer along the entire route.  With so many tourists, the opportunity to get free food, or steal some free food, is common for these animals.  While they are sacred, they can be annoying, so be careful.  They are very aggressive.  My first stop at the shrine wasn’t inside, but rather outside.  I went straight to the Torii as it was low tide.  I walked straight up to it, touched it, and was amazed by the sheer size of it.  After taking several pictures, I started to admire the shrine itself.  The shrine is built on the sand and it appears to float on the water during high tide.  Unfortunately, I wouldn’t experience this, but I can imagine.  The shrine is a beautiful red and white.  Red pillars with white panels.  I was amazed by how clean and smooth the pillars were.  The craftsmanship was amazing.  I was also treated by the view of a traditional Shinto wedding.  Weddings are apparently popular at this shrine for it’s beauty.  I would consider it myself for my own wedding.  The bride and groom were, to say the least, beautiful, and looked happy.  There is even a traditional Noh theatre, but I doubt it’s used much these days.  The atmosphere of the shrine is also interesting.  You have a bunch of tourists, and lots of kids running around.  Once I had finished playing around the shrine, I headed to the ropeway. 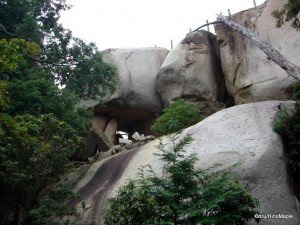 Near the top of Miyajima Mountain

The ropeway to the top, or near top, of Miyajima is interesting.  You can fit about 4-6 people into each car for the first section.  You CANNOT stand.  You are crammed like sardines and if you are claustrophobic, you will probably have a tough time in this one.  However, while you feel you will die because it also feels old, you will get a very beautiful view of the forest below.  I recommend either hiking up and taking the ropeway down, or vice versa.  I never hiked up or down, but I’d imagine it’s a nice hike.  The second leg of the ropeway wasn’t special.  Just a typical 2 car system.  At the top of the mountain, there is only one warning, monkey poop.  Miyajima has several monkey families living on the mountain.  If you wanted to see them, this is a good place.  Just don’t look them in the eye and watch where you walk because their poop is everywhere.  It’s a short 30 minute hike/walk to the peak where you can climb onto a large metal structure.  I recommend the walk, if not just to see the natural fauna and rock formations.  The rock formations near the top of the mountain are a lot of fun.  Kids love to climb around the big rocks, and so did I.  🙂  If you are a Star Trek fan, this will remind you of all the classic battles where Captain Kirk fought on alien planets.  Just be careful as you can easily fall or slip.  The view from the top of the mountain isn’t so special.  The metal structure is actually pretty ugly, but since less people venture to the peak, it’s more relaxing.  You could also see monkeys, but I saw none in this area.  There is another lookout at the ropeway station, however it isn’t a 360 view. 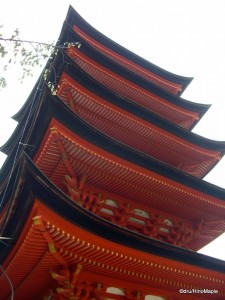 Upon returning to the base of the mountain, I decided to do a little shopping.  Hiroshima is famous for “Kaki” (oysters).  They grill oysters everywhere and the smell fills the entire shopping area.  I wanted to try some, but I don’t like oysters.  I did try some Momiji Manju.  This is basically a typical Japanese desert/snack.  It’s a little dry and traditionally filled with anko (red bean paste).  It’s not for everyone, but after a while, you get used to it.  In Miyajima, they are formed to look like Maple leaves and filled with various fillings such as macha, chocolate, and cream cheese.  I highly recommend trying it.  I also had a chance to buy one of my traditional Japanese souvenirs.  Sake.  🙂 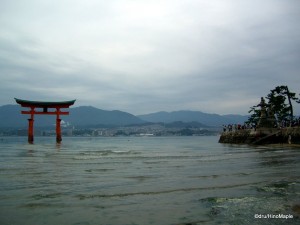 When Japan decided on it’s Top 3 Views of Japan, Miyajima definitely deserves it’s ranking.  I have recommended this to many family and friends, however, many cannot understand the true beauty of this little island.  Kyoto and Nara are wonderful cities with culture, but Miyajima is pristine and untouched.  Get away from the crowds and you’ll feel like you’ve found a secret untouched world of Japan.  One that hasn’t been influenced by the West.

To read more about Miyajima (Top 3 Views of Japan) and the surrounding areas, please visit the following posts on Dru’s Misadventures:

To read more about the Top 3 Views of Japan please visit the following posts on Dru’s Misadventures: